The Ladies of Park Tower 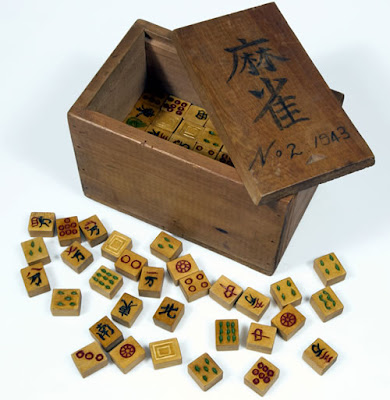 Every afternoon, the comfy chairs and tables in the lobby of our apartment building are taken over by a group of between 3 and 8 elderly Korean women.  These women are, for the most part, tiny, wizened, grey-haired  ladies who must be in their 70s and 80s, old enough to have lived through the horror and privation of the Korean war and now undoubtedly enjoying a comfortable retirement, cared for and revered by doting children and grandchildren.  Around 2 or 3pm each day, probably after a delicious lunch prepared by a dutiful daughter-in-law, they begin to totter out of the elevators, some using walkers or canes, one in a wheelchair pushed by a friend.  These women - who, in Korean culture, are treated with the greatest respect - spend each afternoon ostensibly playing mahjong, but, I imagine (if my friends and I are anything to go by) mostly just talking, enjoying each other's company, and keenly observing the comings and goings of their fellow apartment dwellers through the glass walls of the lobby.

A few days after school started this year, Son #2 commented to me that, each afternoon as he came home from the school bus, the ladies stared at him through the glass lobby walls as he walked into the building towards the elevators, and that it made him feel uncomfortable.  We had a little talk about cultural differences (Korea is a fairly homogenous society, and, as such, foreigners are still very much an anomaly;  it is not unusual at all for a Westerner to be stared at openly and with frank curiosity) and why the ladies might be staring at him.  I also pointed out that the ladies would probably welcome a polite bow or a smile as a friendly gesture.  In typical 14-year-old fashion, he greeted this suggestion with rolled eyes and an inquiry about what there was to eat, and the topic was dropped.

About a week ago, there was a school holiday, and Son #2 and I happened to be returning home together in the afternoon.  As we approached the building near the lobby, I could see the mahjong ladies looking at us, and, as we got closer, I noticed them begin to smile, wave, and nod in the friendliest way.  As I bowed back and began mentally composing a motherly treatise on the importance of friendly manners, intercultural communication, and general kindness, I realized that the ladies were still in a flutter of smiles and waves, and they were clearly not directed at me.  Puzzled, I glanced over, and  realized that it was Son #2 who was the object of their attention.  He was bowing, smiling, and waving, and it was obvious to me that this was a regular occurrence, because the ladies were clearly delighted, nudging each other, nodding, waving, and smiling back at Son #2 as we made our way through the lobby to the elevators.   Son #2 took all this in stride, entering the elevator and pressing our floor button with a final wave to his doting geriatric fan club as the doors closed behind us.  When I finally regained speech, I - naturally - asked him about this little exchange.  He explained to me that he had been greeting the ladies for over a month, ever since our conversation, and that it had become a daily routine.

I thought this was wonderful and told him so.  He confessed that he'd felt a bit silly bowing and waving at first, but that he looked forward to it now.  "You know, Mom," he said thoughtfully, "not to be conceited or anything, but I think they're really happy to see me."

You know what? I think they probably are, too.
Email Post
Labels: Cultural differences Life in Seoul

nappy valley girl said…
How lovely, and how wonderful that he took what you said on board. Those ladies sound like they are having a great time - I hope my life will be like that when I'm a wizened old lady!
October 12, 2011 at 3:49 PM

Karen said…
OK....I read a little about this on facebook and came over to see what it was all about. I am (or was) in a particularly pissy mood, think it is hormones, complicated by sudden season change today, exhaustion (bad, dream filled sleep last night) and just general let down after a stressful few weeks at home and at work. Also, back pain that just won't quit, although it is not too bad. Anyway, had a little sniff over your boy, who rolled his eyes but listened anyway and ended up doing a really nice thing. And now he likes it! He is so pleased that the ladies are happy to see him! These kids....trying to appear so jaded on the outside, but still so young and impressionable on the inside. What a nice boy...I want him for my girls. Katie is just the right age...2 years younger. Save him for me, OK??? Love, Karen (who is, quite honestly, still a bit pissy and teary, but feeling a bit better about the world....thanks!)
October 13, 2011 at 2:16 AM

MsCaroline said…
Karen: Awww...I didn't get teary when writing it, but I did when I read your comment...I'm all for an arranged marriage! I'm glad I write these things down - helps me to remember when I'm fuming about socks or other minutiae. Here's hoping you are soon feeling better on all fronts!!!
October 13, 2011 at 6:38 AM

Wilma said…
Hi Carolyne! Great story. Glad to hear he made friends with the ladies. Next thing you know they'll be teaching him to play Mahjongg even without a common language. LOL I wish mine did stuff like that. He just rolls his eyes and forgets about what I said, if he ever hears it at all. :( Anyway........I'm like Karen, your story helped lift my spirits too. Bad week or so here as well. Hopefully it's all straightened away now.
October 13, 2011 at 8:00 AM

Trish said…
I love this! Our young boys can often be seen as surly, monosyllabic youths but then they do something like this and it makes your heart burst.

MsCaroline said…
@NVG- I hope mine will be, too! It looks wonderful!

@Wilma - never underestimate what your kid is hearing! It may seem like it's water off a duck's back, but I am here to say there is hope! Sorry you're going through a rough patch right now, though. Hopefully things are on the upswing...

Circles in the Sand said…
good for son2! I hope my two grow up to do that too! At the moment, despite talking to me non-stop, BB becomes totally mute the moment anyone else talks to him! I'm trying to get him to wave to the security guards at our compound entrance, and end up waving madly at them myself to make up for his unwillingness! Lovely post.
October 15, 2011 at 7:47 PM

Elizabeth Musgrave said…
Now that is great! I found this a bit with my son, now a totally lovely adult. Appeared not to listen and was always way more interested in the next meal than in my words of wisdom, but did perhaps take it in after all. I am sure he is right that they look forward to seeing him and like the exchange of waves and smiles.
October 16, 2011 at 12:17 PM