Don't let the deceptively lush photo above (taken back in October, before it Got Cold) fool you.  Those of you who read this blog regularly will be aware that it is still Winter in Seoul.  For the last few months, I've done nothing but whine written consistently about the freezing winds, arctic air masses, snow, slush, numb fingers and toes, and my practical but not necessarily fashionable approach to keeping warm, and I'm sure you're all sick and tired of it. Me, too.

In last week or so, though, there have been hints of Spring in the air as March approaches, with a few days in the low 50F/12C range, with more forecast for this week.  In fact, it was so (relatively) balmy one afternoon last week - just before my tiresome week-long bout of laryngitis, in fact - that my friend L and I ventured out for our first walk since last November.  We were not alone;  lots of our winter-weary fellow-citizens were also out soaking up the watery winter sun and enjoying being outdoors without fear of frostbite.
However, as encouraging as the warmer temperatures were, we could tell that Spring was not exactly around the corner; signs of spring - at least in terms of buds or green leaves - were almost nonexistent, and most of the water we saw was still in the form of ice, frozen into stillness.  For those of you who are rolling your eyes and wondering just how much one woman can exaggerate, I have taken a few photos of some of my favorite spots on the grounds outside the National Museum of Korea that will prove to you that it really has been freaking cold here to give you an idea of what things look like.   Here's what the  stream pictured above (in early October) looks like right now in late February: 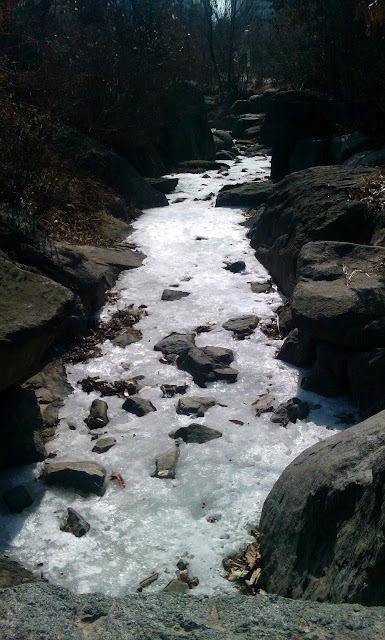 Quite a difference, isn't it? Here's the stream from the other direction; first, in October: 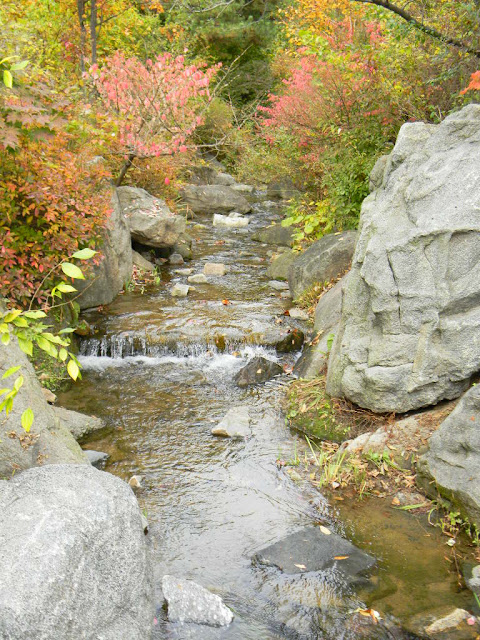 Then, in late February: 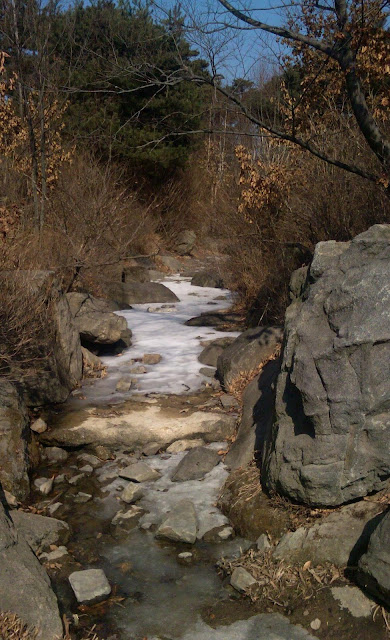 Observant readers will note that the water in the stream in the winter photos is all in the form of ice, and - from what I can see - it will be a while before it all thaws out.
Another body of water in the park, popular with tourists and locals alike for its serene Zen-like design and natural beauty, is a small pond -complete with waterfall - called Dragon Falls. The first time I saw it back in October, this is what it looked like: 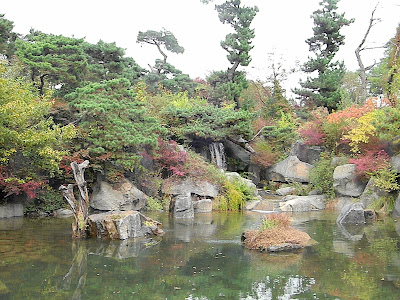 Here's what it looks like now:
Having been there so many times when the waterfall (visible in the first photo at just past 12 O'clock) was running, I missed the background gurgle of the waterfall, which is apparently turned off in the winter.  It's clear that the ice is beginning to thin and melt in some places, but we've got a while to go.
Another spot nearby, adjacent to the National Museum of Korea, is the Yongsan Family Park, which boasts a small, man-made lake.  In warmer parts of the year, the trailing branches of weeping willow trees encircle most of the lake: 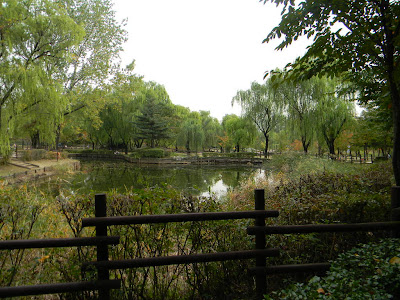 Right now, the branches are bare, with just a few dead leaves clinging to them: 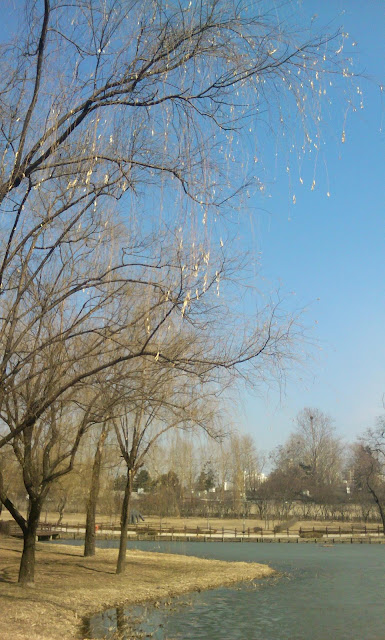 There are still big chunks of ice in this lake, but it's obvious that there's been a bit of melting going on.  There still aren't many 'real' signs of spring - no bulbs, no green leaves, no swelling buds - yet.  But the ice is melting.  I know Spring can't be far away.  I'll let you know what it looks like.
Email Post
Labels: ice spring winter in Seoul

Frances said…
The October photos are beautiful, but I can see it is definitely a bit chilly from the recent ones! We have many signs of spring here in S.E. England,and have had several days at 12C recently...positively balmy compared to other recent temperatures! I saw daffodils out this morning by the river, and a blackbird was singing his heart out at dusk last night. The local rookery is being built with sticks and leaves, and crocuses ( crocii? ) have been flowering for a while now.Hope you can actually feel warm soon......I am loving reading your blog and finding out about a part of the world I previously knew nothing about.
February 29, 2012 at 10:37 AM

nappy valley girl said…
Your winter photos look like what it is usually like here, but just hasn't happened this year (I've just blogged about how mild it's been). I bet the spring will be spectacular there - do you get the cherry blossoms like Japan? I love the autumn photos - very Oriental and beautiful.
February 29, 2012 at 3:52 PM

BavarianSojourn said…
Beautiful beautiful photographs, especially that first one! The colours are just amazing! Come on Spring, hurry up!!! Are you allowed to skate on that ice over there? I know there are lots of places in Germany that you are not "allowed" to skate, but I saw lots of people ignoring the rules this winter! Emma :)
February 29, 2012 at 6:46 PM

MsCaroline said…
Frances - I would give anything to see daffodils and crocus/croci (no idea)- they must be gorgeous now! There is a small botanical garden on the Natl Museum Grounds and I'm looking forward to seeing when things start blooming. Every shop has daffodils, tulips, etc., but I have yet to see anything green in the ground.
February 29, 2012 at 10:30 PM

MsCaroline said…
NVG-thanks - it was really gorgeous in October. I'm curious to see what April will look like here - I've heard it's gorgeous, but as it's my first one, I have no idea yet...I'm sure there will be a number of posts once things warm up! Jealous of your mild winter...
February 29, 2012 at 10:31 PM

MsCaroline said…
Emma-
I've never seen anyone skating there, but there are a number of outdoor rinks in Seoul, including one right in the middle of downtown. It's certainly been cold enough for them to do it!
February 29, 2012 at 10:33 PM

Karen said…
Beautiful and bleak pictures, Carolyne. The bleak ones do remind me of winter in New England. So many times there is no picturesque snow...just bleak and brown. This year-no snow, bleak, brown and pretty warm! Not too bad. It is winter tonight, though, snow and freezing rain. The lights just blinked, think the snow is very heavy. Hope we don't lose power! I just turned up the heat...just in case I want a warmer base than 66 to last the night! You must remember back to the days of your youth when March meant only that it is time to hope for spring.
Good nignt!
March 1, 2012 at 12:29 AM

Circles in the Sand said…
Fantastic photos! When spring finally does make an appearance, it'll be exhilarating - I remember so well from Minneapolis! Here, it's 1st march and the temperature has suddenly shot up - it's too hot outside - I think I'm about to put the AC on already. Noooo, don't let the dreaded summer be starting, pleeeeez!!!
March 1, 2012 at 10:25 AM

Trish said…
What a good idea to photograph the same scenes in different seasons. Sometimes as the landscapes change slowly we don't appreciate how stark the winter is.
We have snowdrops here and little hints of Spring but then a hideous day like yesterday, with rain and blizzards, stopped me getting my bikini out of the cupboard just yet!
March 5, 2012 at 3:01 PM

MsCaroline said…
Karen-'bleak' is the right word! And, yes, I do remember March in Boston, and it was not particularly lovely. However, Autumn in NE - nothing can beat it!
March 5, 2012 at 10:51 PM

MsCaroline said…
Circles - hard to imagine that you need AC already - even in Arizona we didn't usually start using it until April!
March 5, 2012 at 10:52 PM

MsCaroline said…
Trish - I actually got the idea of seasonal photos from Elizabeth at her gorgeous blog, 'Welsh Hills Again' http://welshhillsagain.blogspot.com/
I enjoyed looking at the contrasts so much, I thought I'd try the same thing! I've been looking diligently for any kind of bulbs to come out of the earth, but so far - nothing. I don't know if that's because bulbs just don't grow in Korea, or if it's because they just aren't planted on public grounds. I'll report back later. Sorry about your nasty March weather, but I'm sure you'll be able to pull that bikini back out in a week or so...right? ; )
March 5, 2012 at 10:56 PM

I'm Henry Chen from the Philippines. Me and my friends will be spending the Valentine's Day in Seoul next year 2013, specifically February 12-16.

As someone who hasn't experienced snow in his entire life, seeing some would really be a treat for me and my friends.

So, I would just like to ask if we could still see some snow covered houses, temples, trees, or roads during that time? Can we still experience some snowfall?

Your response will be very much appreciated. Thanks and more power to your site. Actually me and my friends also love Seoul. We've been there last Halloween of 2011.
June 13, 2012 at 1:25 PM

MsCaroline said…
Henry - Thanks for stopping by! As far as winter in Seoul goes, I've only spent one winter here, so I'm definitely not an expert by any means! It certainly was cold enough for snow in February this year, although it's hard to say if there will be snow on the ground when you come. I would say you have a good chance of seeing it, but I can't promise you. If you are really determined to see snow, the many mountain peaks around Seoul remain snow-covered much longer than the city streets, so you might want to plan to do some hiking. I'm sure you'll have a wonderful visit, and I hope for your sake there will be a good snow while you're here!
June 16, 2012 at 11:59 PM