Chuseok 2013 in Cambodia: Getting to the Victoria Angkor 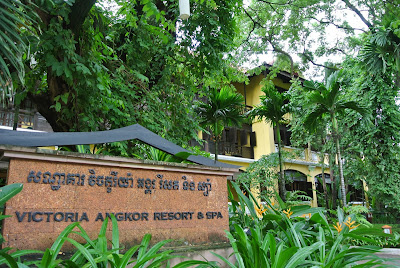 Although MsCaroline knows you are all slavering with anticipation for temple photos, she is going to tell you up front that this post has little (if anything) to do with temples and, instead, is about the town of Siem Reap, which - as far as MsC can tell - exists in 2013 solely for the purpose of housing, feeding, entertaining, and generally catering to the tourists who come to see Angkor Wat.  (MsCaroline apologizes if you already knew this, but, until she started planning this trip, she didn't, and can only assume that some of you may be in the same boat.  She is also including a certain amount of detail that will be obvious to frequent travelers in S. E Asia, but which may not be quite so clear to readers who are used to traveling in Europe or the US, and might come in handy for some of them who are planning their own adventure.)

MsCaroline promises to get to the temples very, very soon.  Really.  But for now, the nuts and bolts of the trip and a bit about the hotel:

The Journey:  The AsiaVu family (well, 3/4 of them:  Son#1 is at Uni in the US, presumably with his nose to the grindstone) arrived at 10:45pm (12:45 Seoul time) at Siem Reap International Airport.  As in many SE Asian countries, a  tourist visa had to be purchased at the airport upon arrival, and MsCaroline braced herself for a certain amount of chaos during the process - unnecessarily.  The visa process (which includes a photo) was the fastest MsCaroline had ever experienced.  Forms having been handed out and completed on the airplane, it was a simple matter of handing over paperwork, passports, and $20US, and they were on their way in a matter of minutes, past the baggage carousel (carry-ons only for this trip - nice time saver and allowed them to get ahead of the enormous Korean tour group traveling on their plane) and out to the airport entrance, where a throng of drivers and guides were waiting to meet their clientele.

The driver from the hotel - the Victoria Angkor Resort and Spa- was waiting - as arranged in advance via e-mail with the hotel and family and baggage were whisked quickly into the waiting car (which had not only AC but also - be still Son#2's heart - in-car WIFI) and driven the short 15 minute distance to the hotel.  Son#2 - possibly reflecting on the 3-hour drive through mountainous roads populated with livestock and cyclists that he had endured after the 7-hour flight to Bali - was sold immediately and declared he would be perfectly happy to come back and spend his winter break here as well without even having seen anything.

The hotel:   turned out (to MsCaroline's great relief) to be exactly like the online reviews and photos described:  a lovely French-Colonial-style building made to look like something from the mid-to-late1800s but - having been built around 2003 - with all the modern conveniences.
The Victoria Angkor's downstairs reception area looked like something out of Rudyard Kipling: an open-air arrangement decorated with rattan furniture placed in conversational groupings, sepia-toned photos of historic landmarks and early explorers, lovely Asian art reproductions, teak everywhere, and cool tile floors just off an enormous veranda that housed the bar, pool, and breakfast area.  The building itself - only 3 stories high - was built around an open central courtyard with koi ponds and towering trees.  Having such a lovely place to return to after fighting the temple crowds, shopping crowds, rain and mud (keeping in mind the Asia Vus had arrived smack at the height of the rainy season with typical impeccable planning) was an absolute godsend. 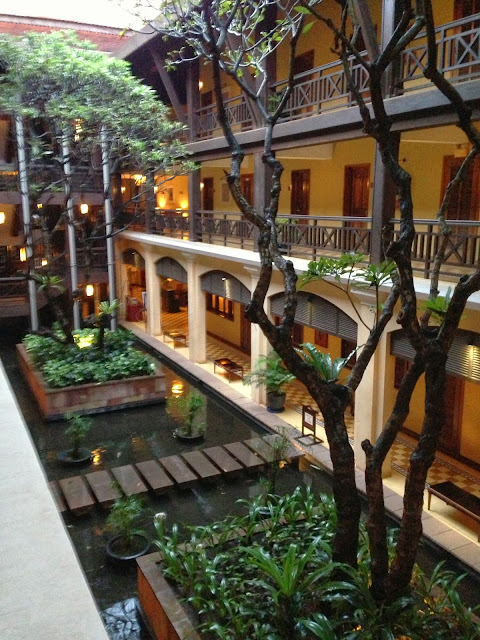 During check-in, the concierge made a comment about crocodiles in the koi pond, but MsCaroline - who had now been up at least 3 hours past her normal bedtime - dismissed this as a joke, which it turned out not to be when she strolled down the next morning for breakfast.  The Victoria Angkor did, indeed, boast a small plexiglass tank of crocodiles smack in the middle of the koi pond: 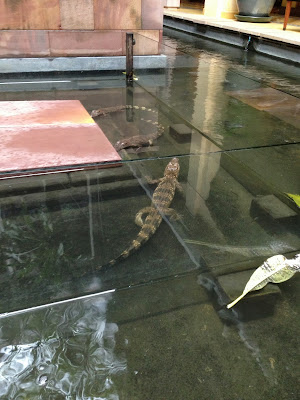 Granted, they were not exactly large specimens - more like the size of a mature iguana - but they were clearly crocodiles, and that was good enough in MsCaroline's book.

While generally satisfied with the room they had booked, the AsiaVus decided to inquire as to the possibility of an upgrade to a larger room or suite if MrL deemed it within the budget This was based on the inevitable clash of early-morning expectations in a room shared by 2 adults and 1 16-year-old (eg, the adults wished to rise at 6am and drink coffee on the veranda, which required light, activity, and open curtains.  The 16-year-old - not surprisingly - felt differently.)  Fortunately for all concerned, a suite was available at a reasonable cost, and the Asia Vus were moved into the somewhat grandiose-sounding 'Maharadja (sic) Suite,' which boasted - in addition to the lovely rattan furniture and tastefully placed objects d'art - a series of vintage sepia-toned photographs of Maharajas of the Past hanging on the walls (the fact that Maharajas were Indian and the hotel was in Cambodia was really not worth quibbling about.  MsCaroline just appreciated the vibe.)  These august personages and their unblinking 19th-century stares became the source of untold mirth during the subsequent days of the visit, from their regal poses to their 'crazy eyes' - which were then imitated by MrL -and, occasionally, #2 - and photographed by MsC all over Siem Reap and Angkor Wat proving once again that the AsiaVus are not sophisticated enough to be traveling to UNESCO World Heritage Sites.

Overall, the suite was very lovely (although the low rattan furniture-while appropriate to the style and period - would not have been MsCaroline's first choice for comfortable seating,) spacious, and -best of all - allowed MrL and MsC to indulge their early rising habits and drink their morning coffee without disturbing their somnolent offspring.

The rest of the hotel was just as charming and provided excellent service,including a breakfast bar which included nearly every imaginable breakfast item from Europe, the US, and Asia, as well as a diy mimosa bar and a traveling chef with omelette trolley for those who were hungry but too lazy to walk the 2 meters to the actual egg station.  Daily Happy Hour poolside (5-7pm), 3 restaurants, a gorgeous gift shop, and complimentary performances by traditional Apsara dancers made this one of the best hotel stays the Asia Vus had experienced in Asia.

While Son#2 - who went nowhere without his camera - took these, which were significantly better: 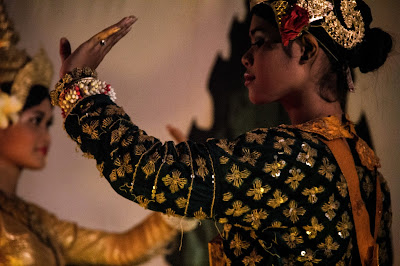 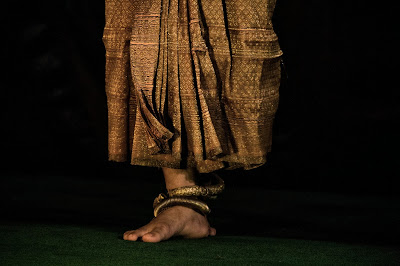 Located directly across the street from the hotel were the lovely Royal Gardens,, a formally-landscaped (well, as landscaped as a tropical place can be) park full of towering jacarandas, magnolias, and a number of other plants that MsCaroline could not identify.  On the far side of the park were a number of huge trees which hosted a thriving, twittering colony of what MsCaroline fondly assumed to be birds, and she thoroughly enjoyed watching them swoop and squeak each morning as she drank her coffee.

On their last afternoon in Cambodia, the Asia Vus took a brief stroll across the park, where MsCaroline hoped to take a few photos of the birds that had so enthralled and entertained her during the last 5 days.  As they drew closer, it became apparent that the 'birds' were not exhibiting much typical bird behavior - in fact, although they were occasionally visible swooping here and there, none of them were visible perching on branches - very odd, considering that their cheeping and squeaking made it obvious that an enormous group must be nesting in the trees.  Frustrated, MsCaroline dug out her zoom lens and, fixing it on one of the nearest branches for a good shot, saw this:

Yes, the Royal Gardens is home to an enormous colony of Giant Fruit Bats, and not the cheery flock of toucans or whatever MsCaroline's naive imagination had conjured up.  While the AsiaVu family are not scared of bats, there was a general consensus that, while the Royal Gardens had been quite delightful, it really was getting late and they beat a hasty retreat returned quickly to the hotel.

When the Asia Vus were not lounging around in the hotel or scrambling through ancient temples, they were usually eating, shopping, drinking, or taking in the sights of Siem Reap, highlighted in the next post (and yes, we're getting to the temples soon - really.)

BavarianSojourn said…
WOW! Loving the faces, and the bats! Looks incredible! We stayed at the Victoria in Can Tho years ago, wonder if its the same group. Looking forward to the temples! :)
September 28, 2013 at 7:19 PM

MsCaroline said…
Emma - it was so much fun - and I was very pleased about the bats, although I wish they'd been the insect-eating sort instead of the fruit kind. I know this hotel is part of a group, so it could well be - if so, I hope you enjoyed it as much as we did!
September 29, 2013 at 1:51 AM

Trish said…
Nodding with agreement over the Asia Vu elders wanting an early morning coffee and the Asia Vu son requiring lots of sleep. I think I've found our Doppelgänger family!
Free WiFi and short journey would suit my son too.
Love the photos and general irreverence plus your son's photos are fabulous - especially that one of the dancer's feet.

MsCaroline said…
Trish - that's the worst, isn't it? He was a pretty good sport about it the first morning (only rolling over and moaning, "Why?" before burrowing back under the covers) but it wasn't much fun for us tiptoeing about either. The switch to the suite was the perfect solution. When I saw the rooms online originally, I'd thought they were much bigger and he'd be across the room. It's always such a headache trying to suss out whether or not a room is *really* appropriate for a 3rd person (who isn't a 4-year-old) by squinting at photos online. We always jump at the 'family room' option when it's available, because it usually provides precisely the arrangements we are looking for! I'll pass your comment on to #2 - he always thinks of the original shots and they usually turn out so well. Part of the reason I appreciate your blog so much is that - while it always includes useful and factual information - it has just the touch of irreverence that I appreciate! Great minds, you know....; )
September 30, 2013 at 6:57 AM

Stacy said…
The crazy eye photos are the best! You made me laugh out loud a few times in this post and brought back more fond memories of our own family trip. We stayed in some place lovely but it didn't have near the character of your hotel.

I am going to share this link with Facebook friends because I know folks from KL and Singapore are always headed to Angkor Wat, especially with the Hari Raya (Eid) holiday coming up.
September 30, 2013 at 3:07 PM

MsCaroline said…
Stacy - We did have fun with those crazy eyes! Thanks for passing the link on - hope it will be of help (or entertainment) to someone!
September 30, 2013 at 9:35 PM