When MsCaroline last posted, the AsiaVu family had just added a new puppy to the family and the wild rumpus that is puppy-raising was just getting underway.

The puppy, who was not quite 9 weeks old and extremely small (under a kilo/about 1.8lbs) was doing a lot of this: 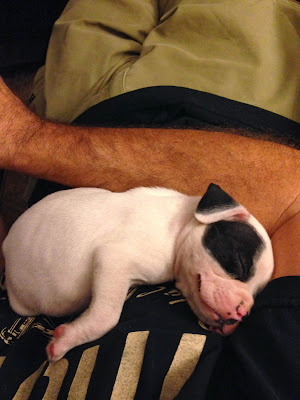 That is to say, she was mostly sleeping and being adorable, with intermittent pauses for brief, cuddly playtimes, after which she would go back to sleep again.

That part of her life, sad to say, is mostly over, and she has entered her puppy adolescence with a vengeance.

The jury is still out as to whether she is a French Bulldog or a Boston Terrier- many people who are more knowledgeable than we are have emphatically declared that they are positive she is one or the other, or a combination, which puts us right back where we started.  Whatever she is, her ears - which we were most excited about - have, as promised, come into their own Yoda-like glory: 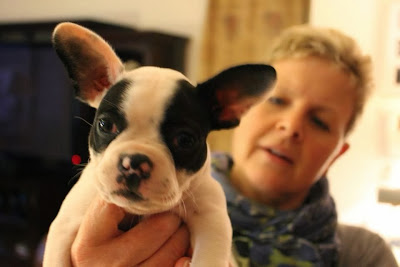 While she cannot quite destroy things the way our retriever puppies did, she can (and does) process food and water at a tremendous pace, which means that, when she's not in her pen (where she spends her time when MsC is gone for more than 4 hours and can't be shut in her crate), she must be watched like a hawk at.all.times (guess whose job this is 90% of the time?). At 12 weeks, she revealed herself to be an escape artist, which led to us double the height of her pen.  This looked patently ridiculous, especially in view of her relatively small size.  However, having had to spend an afternoon scrubbing away the evidence of her lengthy morning romp through the apartment after scaling the single-height walls of her pen, MsCaroline was taking no chances, and felt no guilt about consigning Ms Houdini to the  Puppy version of SuperMax confinement:


In this middle of all this canine Sturm und Drang, Son#2 headed off to Mongolia on a school service trip, where he worked in an orphanage for a week. 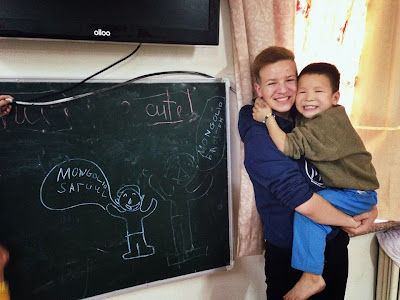 While MsC was extremely proud of him for donating his time so generously, she must admit that she was also a bit sorry to see him go, mostly because she likes having him around, but - if we're going to tell the truth here - also because #2 provides excellent dog supervision service, which she missed terribly. MrL pulled his weight when he was around, but MsCaroline will just say that it was a loooong week.

Oh, and there were the two teenage houseguests from an international school in Shanghai here on an orchestra program for 5 days.  MsCaroline has never had houseguests and a puppy (in an apartment, no less) at the same time before, and found it a bit challenging.  The guests (lovely teenage girls) were extremely gracious about having to climb over gates and pens and occasionally navigating puddles of puppy effluvia to get to their breakfasts in the morning, and were remarkably understanding when the Hound inserted herself into their bedroom and made off with a t-shirt (rescued before anything terrible could happen to it, but still.)

All I am saying is that it has been, at best, a bit challenging.

For those of you who, like MsCaroline, have raised more than a few puppies and thought you knew what you were doing are wondering how raising a puppy in Seoul is different than raising one in suburban North America, MsCaroline is happy to share what she has learned if it helps even one person avoid a similar fate:


There are probably many other Life Lessons that MsCaroline could share with you, but she has to go put on her coat, hat, gloves, scarf, and Uggs so she can walk her dog.

Oh, and she has to put clothes on the dog, too. Because the temperature has decided to drop down to the low 30s.  In mid-November.  Which adds another layer of fun to the whole operation.

The dog will contribute to the general pleasure of this activity by wriggling violently and trying to eat her sweater, harness, and leash whilst you try to put them on her.

One of you will be swearing by the time it is all over.

I am still wrapping my head around the concept of a dog that needs to wear clothes (something I swore I would never have - until I observed the dog shivering uncontrollably..sigh)  and have days where I deeply regret not getting a cat, but we are - slowly - coming to understand one another.

As I type this, though, she's gnawing on the bottom of my dining room sideboard.

Unknown said…
Oh sweet girl....that puppy is crazy cute in his little sweater, but I also get how much work he is.

Hopefully, hopefully, he will figure out the paper deal soon!!

much love to you

Joshua Austin, DDS said…
I love boston terriers so much. We had a boston growing up and I have had them as an adult too. They are the best, sweetest, most loving dogs. I am so jealous!!!! He is so cute.
November 20, 2013 at 9:08 PM

BavarianSojourn said…
But she is just adorable... So funny, I thought you had been quiet recently, but then I remembered that you had recently acquired a new baby, and things might be hectic! My sister is in the same position, she now has a tiny sausage dog called Spike, who also loves being an escape artist. He also has to wear clothes, and I might have bought him something completely hysterical for Christmas! :D
November 21, 2013 at 11:28 AM

Trish said…
Have been reading about your puppy problems on Facebook and, as we only have a goldfish, have no useful help to offer.

It all sounds very exhausting and frustrating.

Nance said…
You have my sympathies, but I still maintain that anyone who gets a dog should just go ahead and have another kid. Same thing. And in your case, right down to the cute little outfits.

Merlot is just adorable, and I would NOT be able to stop holding and cuddling her. But probably the peeing thing would irk me a LOT.

Rainbow Motel said…
There are few things as adorable as a tiny dog in a sweater. For this reason it is easier to forgive them when they destroy your home. :)
December 27, 2013 at 9:25 PM