Let MsCaroline be perfectly clear:  this blog post is basically an excuse to post hilarious photos of her dog in a backpack, so don't expect any Pulitzer-prize level writing, mkay?

Shrewd readers will have deduced that the date on this post (nearly mid-August) signifies that Summer is drawing to a close and things are returning to normal chez Asia Vu.  They are correct (hence their designation as 'shrewd.')

In fact, this is the first morning since mid-June that all 3 of us (and the dog) have woken up under the same roof in our apartment in Seoul.  It was a long (and mostly very pleasant) 6 weeks of visiting old friends and family, making memories, sharing reminiscences, and (if we're going to be real here, as #2 would say) shopping.

MsCaroline has plenty of stories from her summer roamings to share, which she will get around to if and when she has time (see how cagey she's getting? She knows better than to make any promises like she did when she was a naive new blogger, like, 'I'll be writing a post about this.'  Maybe she will, and maybe she won't.  See how savvy she is?) but right now, she is surrounded by mountains of unpacking and piles of boxes (full of things she shipped to herself while she was Back Home) so she is going to limit herself to the last 48 hours, which is a manageable chunk of time.

MsCaroline will skip over the details and simply say that, due to a Giant Typhoon that was attacking Japan (where they had a 4-hour layover) as they arrived, they ended up spending 9 hours in the Tokyo Narita airport waiting for the weather to clear so they could take off.

This was not all bad, since Japan Airlines -possibly the most polite airline in the Universe - gave them complimentary access to their Sakura First Class Lounge in order to apologize for the delay. Free food and drinks in a luxurious airport club will go a long way toward reconciling an exhausted traveler to her fate.  (remember this, airlines!)

MrL and MsC spent their 9 hours  in relative comfort, enjoying this:


Anyway, following innumerable delays, their flight finally landed in Incheon at around 1:30 am, and - after hiking miles through an eerily empty airport, navigating Immigration (also blessedly empty) and waiting forever  for their checked luggage - they tiredly boarded a charter bus (supplied by the airlines, since normal service had stopped hours earlier) and trundled off into the night for the hourlong drive to Seoul, transferring to a taxi when they reached Seoul Station, and arriving home at about 4am.

Although they were both bone-tired, they found that - as is always the case when one knows one really should be sleeping - they were far too keyed up to sleep, and ended up sitting in the beautifully cool pre-dawn darkness on their patio with a Belgian beer (purely for medicinal purposes - as a sleep aid) and an enormous sense of relief that the 31-hour odyssey had finally come to an end.


The next day progressed as all days do when you have gone to bed at 4:30am after too much traveling and have a heinous case of jetlag - raggedly, with any number of ups and downs.  At midday, they collected the Dog from the magician dogsitter, and after dinner, they set out for the drive back to Incheon, where they planned to collect Son#2, who was returning from a summer program for high schoolers in Berkeley (MrL's work schedule mandated that he be back for Monday morning meetings, a day before #2's program ended, so they flew separately, which was probably a huge relief to #2 anyway.)

MsC and MrL decided that it would also be entertaining to take the Dog with them, carrying her through the airport in her newest doggie backpack (she had been used to traveling in her smaller one until she outgrew it,) where she could see and hear all the proceedings and (most importantly) be there to welcome #2 back to Korea.

Let MsC assure her dog-loving readers that the Dog fits perfectly in the backpack, is comfortable in it, and enjoys getting in there - in fact, she can even stand up in it - but that her inclination toward curling up in small spaces causes her to spend much of her time looking squashed. 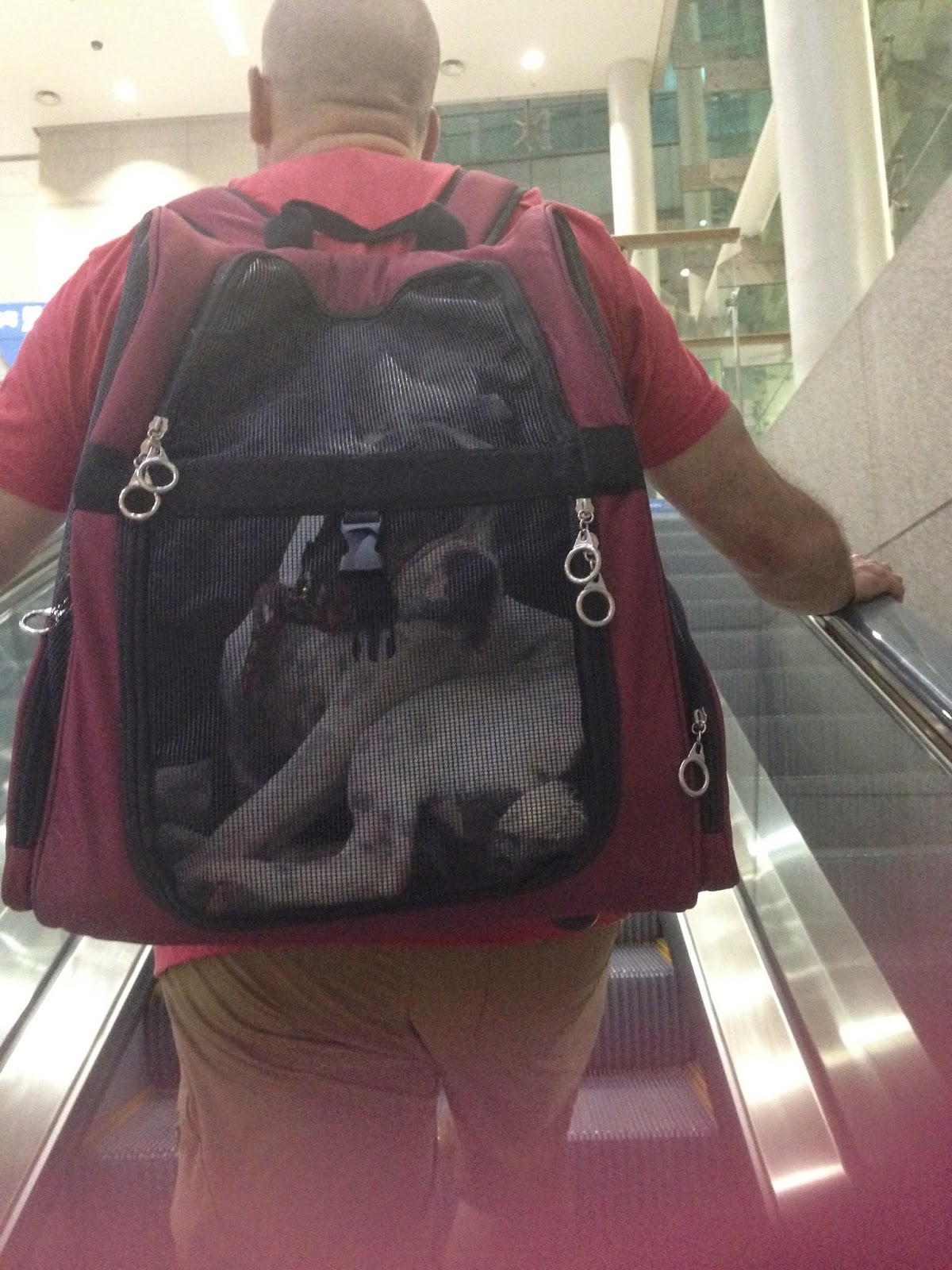 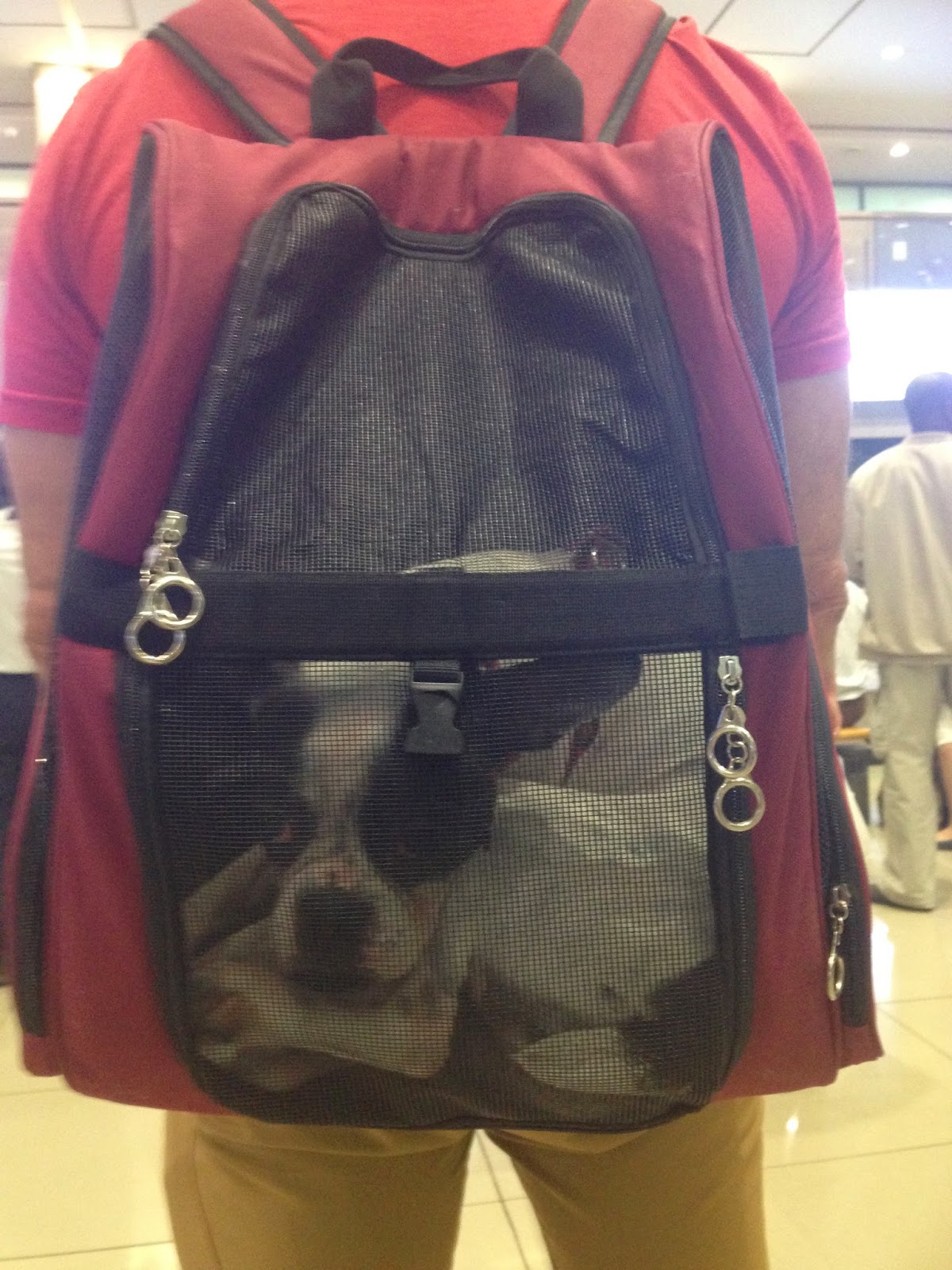 But when she was sitting up normally, she looked very comfortable.  Really. 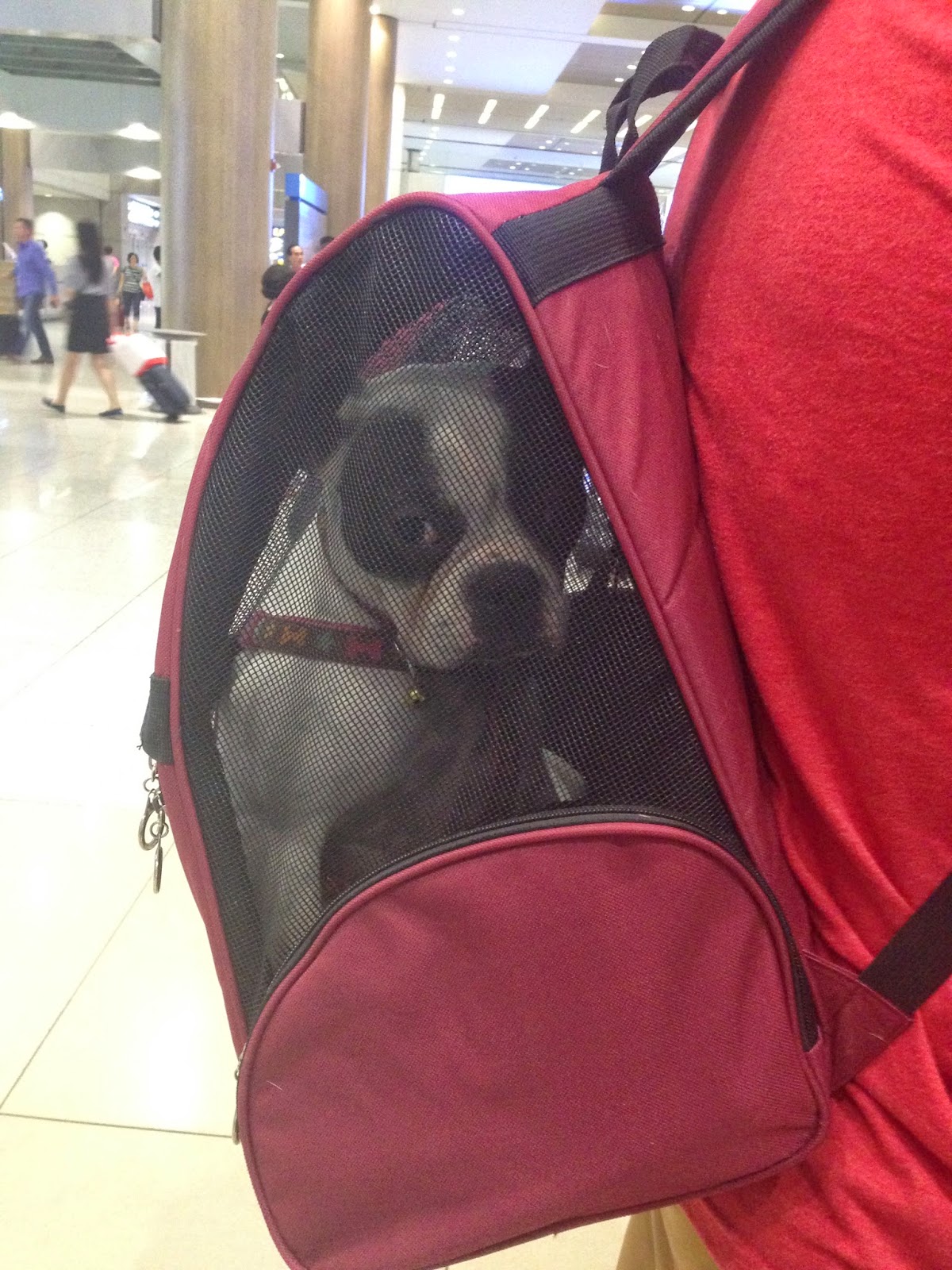 Naturally, MsCaroline failed to get a touching photograph of the tender reunion between a boy and his dog, mostly because she was busy taking surreptitious photographs of the Buddhist monk standing near her, not because he was a Buddhist monk in the middle of an airport (really not such an odd thing in Korea), but because he had on a pair of the brightest orange Crocs you have ever seen, and she was trying to get a shot of them.  Partly because she did not know that monks even wore Crocs, but also because she would not have expected them to be color-coordinated, and she likes the unexpected. So here you are:  a monk and his Crocs.  You're welcome.

Trish said…
Welcome home!
Yes, all airlines should offer free wine and comfy lounges when delayed - how refreshing.
Loving Merlot in his backpack and the croc Monsieur.
Will give you a few days to settle in and then I am expecting a blogging bonanza....
August 13, 2014 at 8:01 AM

MsCaroline said…
Trish - this was our first ever experience with such a luxurious delay - I can tell you that it was far less painful than it would otherwise have been. Too bad I'm such a crap photog - those Crocs were superb - you'll just have to take my word for it. I can't promise a 'bonanza' but I'll at least provide a summary. Some of it was very interesting!
August 13, 2014 at 11:26 AM

nappy valley girl said…
Welcome back - that sounds like quite a summer,and quite a journey. Dog in the backpack pics are fabulous, he actually looks like he is part of the design. And the orange-crocked Monk is a great find too!
August 14, 2014 at 3:00 PM

MsCaroline said…
NVG - thank you! I hope yours was good too - I imagine you're still in the moving-in phase. One of my jobs in the next week is to catch up on my blog reading and find out what everyone's been up to. Can it already be a whole year that you have been back? x
August 15, 2014 at 8:44 AM

Circles said…
Welcome back! Love the dog photos! And the orange crocs! I'm going to be on the lookout in crocs stores for bright-orange crocs now. I wonder if they were specially made (A uniform shop for monks?) Glad you got Son2 back safe and sound, and I hope the jet lag treats you kindly x
August 15, 2014 at 9:37 AM

BavarianSojourn said…
I am such a photo addict, that I always scroll down and look at the pics before I read a post. My first impressions of this post were "wow look at that backpack, that looks just like MsCaroline's Dog! :D Happy re-expatriation. Is that even right? It's been a long day! :D xx
August 21, 2014 at 7:50 PM