Life in England: From my Phone


After breaking the silence of four months the ages, MsCaroline has had a second wind in the blogging department and is absolutely determined that four more months will not pass before she posts again.

To that end (and because she is, essentially, slothful), MsC has decided to just post some photos that she's taken in the last week or so (with a little commentary, of course, because MsC is nothing if not chatty) and call it a post.  She'll do this once a week (unless she's got something better to post) because, after all, most of her readers know her from some other life and are at least mildly interested in the day-to-day that comprises her life in England now.

Maybe, at some point, she'll return to the whining witty and cynical observations for which she is known, but at this point, she's going with photos.

The photo above sums up (more or less) what November has been like here in the South West:  grey.  Although I should point out that the weather in that particular photo is actually fairly nice, all things considered.  (I should also point out that, after living for almost a year in the UK, I now consider any weather that does not include a downpour to be 'fairly nice.'  This means that a drizzle, or mist, or intermittent showers do not count as Actual Rain.)  I will say that we were fairly warned about this, so I'm not complaining, just observing.  And, as I've stated many times in the past - thank God for waterproof clothing.


Quite a bit of my time has been taken up with our wee dog, Merlot, (a Boston Terrier/French bulldog mix known as a 'Frenchton' or 'Frenchbo') who managed to hurt her back with an ill-fated leap onto a bed that was Too High For Her.  She had hurt herself back in May (more leaping: we do our best to prevent it) and had struggled with hindleg weakness, but recovered quite well under a strict rest regime lasting a few long months which was very trying for all involved (try keeping an active 2-year-old dog on Strict Rest and see how well you do.  I dare you.)  This time, she hurt herself enough that her hindlegs were nearly paralyzed (we had to use a sling to hold up her rear legs, during which time MrL callously referred to her as our 'dog marionette') and this involved a week of hospitalization and specialist referrals which were sad and annoying and bloody expensive.  Ultimately, an MRI revealed that she had spinal bruising from a 'low-velocity ruptured disc' and that surgery was not needed (need I say how relieved we were?) She came home on 'Strict Rest' again and has been sequestered in her basket except for potty breaks for weeks, but is now able to take short 15-minute walks around the neighborhood.  She's still a bit wobbly in the caboose, and hunches like Quasimodo, but the main thing is that she's not in pain and can get about under her own steam. 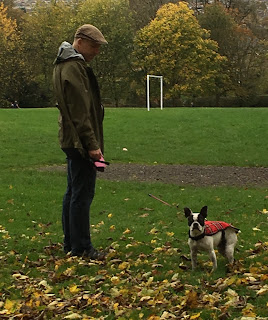 Remembrance Day (Veteran's Day in the USA) was observed on 11th November with a parade (including several WWII veterans!), wreath-laying, many, many poppies, and a church service.  I caught a few shots of the city's dignitaries as they left the Guildhall after the parade on their way to the church service, including the Mayor (he's the one in red):


and one of his legal counsel, who probably has a glorious title to accompany his wig and excellent robe.

What all of this tells me is that the US needs to up their ceremonial robe game significantly.

In other news, Christmas is coming, which it has been doing for quite some time now in the UK, but since there's no Thanksgiving to squabble about, no one is making statements about how terrible it is that people are decorating before Thanksgiving.  The first sign I noticed was the Invasion of the Mince Pies and Christmas Cakes and Puddings in my local Tesco Express: 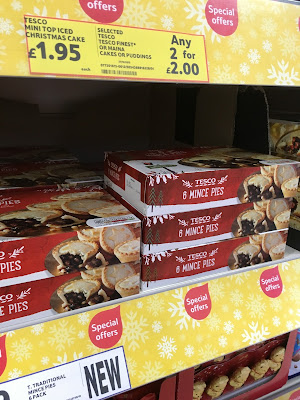 Christmas Cakes (and their near relative, the Christmas Pudding) are baked about 2 months in advance of Christmas (the cakes are 'fed' weekly with liquor whilst they're maturing) contain lots of dried things, and are tightly wrapped, there's no worries about spoiling, even if they're out on the shelves months in advance.  The mince pies seem to be disappearing at a high rate of speed as part of the season.  Note:  mince pies should not be confused in any way with 'mince' which is what the British call 'ground beef'.  They are basically tiny pies full of preserve-y fruity deliciousness, best eaten warm and topped with cream. Once you understand this, everything falls into place.  In other places, decorations are going up:


although we have a week or two to go before the Christmas Market in our own City Centre opens (most of them open the last week in November) so this is all just a warm-up from what I understand.

In the same vein, we went to the mall at Cribb's Causeway in Bristol last week, and I was gobsmacked to see that they'd had snow!

On closer examination, though, I discovered that it was all fake, part of the set of the temporary man-made outdoor skating rink (largest in the South West!) complete with Fairy Tale Ice Castle - conveniently located right outside of John Lewis! 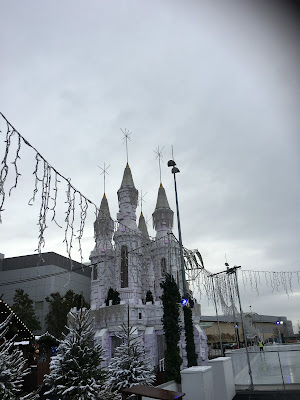 Also included:  a seating area for viewers, and a number of charming little kiosks selling hot drinks, chestnuts, and the like:

It's definitely beginning to look a lot like Christmas.

Kranke said…
As always, my wee dog face, joy of my life, merlot is the highlight! Am jealous of traditional English Christmas decorations and ambience. What the two of us would do with some of the mulled wine, (heavy on the cinnamon and light on the cloves, ala Clarence). We do ha e stories. Love your posts!
November 20, 2015 at 12:45 AM

MsCaroline said…
K- will be sure to quaff a glass or two in your honor, and you're right, we do have stories! I have definitely enjoyed the traditional decorations - I think they work extra hard here on making everything charming and cozy because the weather is so rubbish (that's another phrase I've picked up here.) And I would give a considerable sum of money to see you in an English-style barrister's wig and robes; maybe you should think of introducing the practice in the US? It would add a certain amount of interest to courtroom proceedings. ; )
November 20, 2015 at 7:18 AM

nappy valley girl said…
Did you know that mince pies traditionally did contain some mincemeat (ie beef)? Not any more (particularly in Tesco), although my husband's family did used to make them this way from a traditional recipe.

Nance said…
All in all, a lovely report. Keep them coming for those of us who are Living Vicariously through you.

Bless dear Merlot who, like so many Bostons, has desires that far exceeds her abilities. I have to confess a chuckle at your husband's very apt title of Dog Marionette.

MsCaroline said…
NVG - No, I did *not* know that! I've eaten a lot of odd things, but a sweet pastry that also includes meat is a bit hard to wrap my head around. I think I'll do a bit of Googling and learn more. Bath is looking nice these days, but will probably look even nicer once the Christmas Market is up and running.

Nance - Thanks - it's been really difficult to get back on the wagon. I'm such a perfectionist about my writing, which does me no favors when I don't have a clearly interesting (to me) topic. And yes, Merlot has quite a few of those desires, combined with an unfortunate genetic heritage that means all of her spinal discs are 'dried out' (according to the vet who did the MRI). Anyway, at least she didn't have to have surgery, for which we're deeply grateful. As far as Thanksgiving goes - we have done it in the past, but not always. And now that there are just the 2 of us at home, it will probably just morph into a nice dinner at a pub with American friends.
November 22, 2015 at 8:33 AM

BavarianSojourn said…
So pleased you are "back" :) Even more pleased that Merlot is much better, poor little thing! Not jealous of the weather back home (although Munich has even more rain if you look at the charts!), but I am jealous of the mince pies! :D xx
November 22, 2015 at 2:51 PM

MsCaroline said…
It's nice to *be* back! Feel like I've dropped off the blogging radar in many ways - both reading and writing - but have finally got my 2nd wind! Hard to believe Munich has more rain - I think England seems to have a monopoly on 'grey' more than anything - but not complaining today - sunny and cold - I'll take it!
November 23, 2015 at 11:08 AM