Life in England: A Weekend in Edinburgh, Part II

Note:  This is the second in my series about our weekend in Edinburgh. In my last installment, we were wandering down the Royal Mile, looking for lunch.  You can find Part I here.

While we enjoyed the shops and the many lovely historic buildings, what we found really interesting along the Royal Mile were the closes.  A close is sort of a 'lane' or even an 'alley' - a very narrow walkway between 2 buildings.

These can be found all along the Royal Mile, tucked between the shops and restaurants -and were once themselves full of stands and stalls as well as people going about their daily business(how they all fit, I've no idea.)  Today (no doubt due to Health and Safety regulations) they are empty of everything but pedestrians, but still narrow and a bit dark (Edinburgh had some of the earliest 'skyscrapers' even in the Middle Ages, with some buildings as tall as 14 storeys, which effectively block out much of the sunlight.)  The old buildings and cobblestoned streets make it all seem very romantic and historical.  The closes were often named after the businesses  to be found within the close: 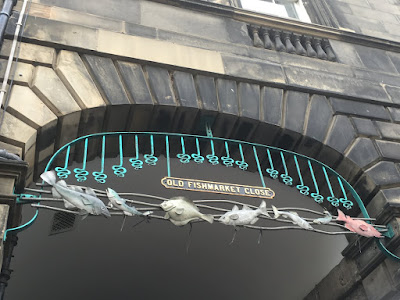 We ended up finding a bar/restaurant in the Advocate's Close (no idea what an Advocate was, unless it was some sort of medieval attorney) called The Devil's Advocate, which got extra points in my book from the very beginning for such an excellent play on words, and extra points in MrL's book for stocking a wide variety of local ales and beers. It featured a cozy interior, about a bazillion types of whisky, and a simple, but sophisticated lunch menu:

After we'd thawed out with some stout and lamb burgers with goat cheese and beetroot tzatziki (I would never have thought of this combination, but it was excellent), we wrapped ourselves up and headed out to see some more of the city.

At this point, as it was still bitterly cold, windy, and sporadically raining, we decided that seeing something indoors would be an excellent plan, which is how we ended up at the Surgeon's Hall Museums, a place that had been on my list for quite a while due to its historicity, obscurity, and creepiness - all things that MrL and I enjoy (in moderation, of course.) As we approached the building, we could see that, if the banners and courtyard art were anything to go by, we'd be experiencing quite an afternoon: 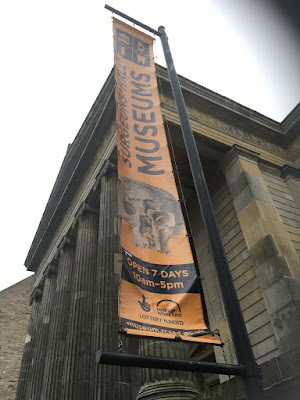 As Edinburgh is the home of one of the UK's oldest and respected schools of Medicine, it makes sense that it would also house a museum featuring a mind-numbing array of historic medical and scientific paraphernalia. Visitors can be deeply grateful they live in the modern era view the development of medicine from the earliest times through the modern day, starting with ancient Latin texts listing diseases, symptoms, remedies, and treatments, most of which seemed to involve removing the majority of the patient's blood, or administering medicines made of things that, today, would probably be classified as biohazards(urine was a popular ingredient.) As far as we could tell, the practice of medicine didn't seem to greatly enhance anyone's lifespan until sometime in the late 1800s, when physicians started to (grudgingly) wash their hands between patients and some decent anesthesia arrived on the scene. (It is true that early anesthesia did often kill the patients, but it was, apparently, greatly preferred to the 'here, bite on this rag while these burly lads hold you down' variety.) The history of anesthesia (or, rather, the lack of it), medical technology ancient and modern, dentistry, and surgery (in the days before anesthesia, 'quick'= 'good')  were all featured in a variety of exhibits and there were lots of evil-looking ancient medical instruments on display as well.

The crowning disturbing glory was the Pathology Museum, which contained hundreds (thousands?) of glass and plastic tanks, containers, and jars holding every possible body part (or sometimes entire bodies,) affected by every imaginable disease, floating in peaceful, disembodied repose in row upon row of labeled shelves. These samples, we learned, are still studied by medical students today. (Note: While the various pickled organs, appendages, and extremities are undoubtedly immediately recognizable to your average medical students, civilians like us were often dependent on the labels to figure out what we were seeing.  If you don't know your spleen from your lung from your  fatty lipoma, it all, as MrL observed, 'looks like waterlogged chicken breast.')

We spent an morbid interesting couple of hours wandering through the halls until we both reached our saturation points, such that one more disembodied ear floating in a jar of formaldehyde would have sent us both over the edge.  We agreed that a scenic stroll, some souvenir shopping, and a few strong drinks were in order, so we headed through the streets of the Old Town toward the West End and Usquabae, a celebrated Edinburgh whisky bar and restaurant where we had made dinner reservations.

(Note:  In case you were wondering, "Usquabae" is the Irish  (Gaelic) word for whisky.)  We'd read great reviews of the bar, its whisky selection, the ambiance, and the food, and considered ourselves fortunate to have managed to book a table on Friday night.  We got there a bit early and had a drink in the bar to help us forget all the pathology specimens.

By the time we'd finished our drinks, our table was ready in the restaurant, which is in a basement with an incredible 'wine cellar' vibe.  Not a dark, gloomy, cold dying-with-the-cask-of-amontillado wine cellar either, mind you; this one was warm, cozy, and softly lit.  The hostess led us through the main dining room and bar area into one of about 6 little curtained alcoves located all along the periphery.  Each alcove was lined with backlit glass display cases featuring a variety of whiskies (some of which probably cost more than our house.)  MrL and I settled in at our candlelit table for two and proceeded to drool over the menu.

The next few hours passed in a sort of a food coma, during which we ate and drank far too much but we didn't care because vacation.  If you are interested in such things, we ate Cullen Skink (a type of milk-based fish chowder), venison, mussels, Balmoral chicken, haggis, turnip and potato mash, and sticky toffee pudding (whisky-infused, of course.)
And, yes, I ordered haggis, and it was really delicious.  In fact, as far as I can tell, haggis is more or less the meat loaf of Scotland (the gravy sort of meat loaf, not the ketchup sort) and is very much a yummy comfort food as long as you don't dwell overmuch on its ingredients.  If you question MsC's judgement on this, be aware that, after nearly 4 years in Korea, MsC's concept of 'edible' has broadened, and she will now eat pretty much anything as long as it is not still moving.


We didn't linger too long over our coffee, since we had to be up early the next morning for our much-anticipated "Experience Malt Whisky" distillery tour.  We paid our bill, wrapped ourselves up, and reluctantly left the cozy warmth of the restaurant to head out through the dreich* evening back to our room.

Nance said…
What a gorgeous menu! I would have had a terrible time deciding. How was the Wine List, if one existed?

The museum sounds Very Interesting and Quite American Civil War-esque. But true, there is only so much of that stuff that you can Appreciate before you become sated and desensitized. My eventual response is to start getting Silly in a very darkly comic sort of way, and fear getting kicked out.

Trish said…
You found some excellent places to eat and drink - we must hunt them out next time we visit Dougie's home town.
I've never been to the Surgeons Hall Museum either so that's another reason for a return trip.
Balmoral chicken is my son's favourite meal: he's a real haggis fan.
March 6, 2016 at 6:04 PM

Unknown said…
Great to see these last two posts. We are off to Edinburgh in July, so will file these for future reference.
Can't wait!
Cheers,

MsCaroline said…
Nance - it *was* difficult to decide, but we were freezing, so at least that ruled out salads from the get-go. There was a Wine List, but we didn't look at it too closely, since we knew we were drinking stout anyway. I imagine it was lovely, though. I know what you mean about the museums - we were in one in Roswell, NM during the UFO festival one year and were snickering at the alien exhibits in a very disrespectful way. This is how we learned about the Subculture of People who Take The UFO stuff Really Seriously. They do not have much of a sense of humor, it turns out.
March 7, 2016 at 11:35 AM

MsCaroline said…
Trish- Both of them were fab, but if you have only time for one, hands down Usquabae, without question. I can't believe you -as a physician's wife - have never been to that museum! Of course, it would stand to reason that Dougie wouldn't want to spend his holidays in a work environment - so maybe that's why. Honestly, I really loved the history of medicine part - if nothing else, it made one deeply grateful to have been born in the 20th century - but I could have done without *quite* so much of the pathology! ; )

I really ordered that haggis as a bit of a lark - I assumed I'd eat it but that it would be more of a 'ticking the box when in Scotland' thing. It was a pleasant surprise and I had it twice more while we were there!
March 7, 2016 at 11:42 AM