Sights in Seoul: Morning Walk Along the Han River

The mark of a successful man is one that has spent an entire day on the bank of a river without feeling guilty about it. — (Chinese philosopher) 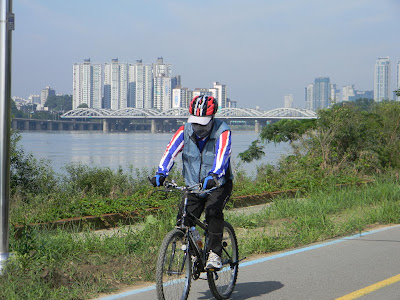 On Sunday morning, I awoke to a rare, perfect summer day here in Seoul.  The sun was shining, a cool breeze was blowing, and the ordinarily-overwhelming humidity was somewhere down at the 'managable' level.  Mr. Logical, who labors under the delusion that no weekend is complete without participation in an extreme athletic endeavor, had gotten up at 4am to drive to a national park some 2 -3 hours away for a 145-km ride with a number of equally deluded committed cyclists and was suffering joyfully somewhere in the mountains.  Sons #1 and #2 are traditionalists and were, therefore, still sound asleep since it was not a school day.  This left me (since I had woken up at 4 when Mr. Logical's alarm went off and never really quite gotten back to sleep) wide awake on a gorgeous summer morning with an open agenda.


When I started blogging back in April, my intention was to keep in touch with our families and friends, and give them a little insight into our expatriate adventure in South Korea. While I think I've done well at keeping in touch, and I've definitely shared more than a few of my wacky expat misadventures, I haven't done as well at sharing my day-to-day surroundings, mostly due to the fact that I am a) forgetful; or b) usually talking.  I realize that at least some of my readers (Hi, Mom!) might like to see what our everyday life looks like here in Seoul, so with that in mind, I headed out for a walk with my camera to enjoy the all-too-rare sunny morning.


Our apartment building is a short walk from the Han River, which curves across the southern part of Seoul.   In order to get to the river path, I have to cross the busy major street in front of my apartment building. This is best accomplished by walking under the street via the subway station tunnel instead of taking my chances with the taxi drivers, who are inconsistent about stopping for things like red lights and pedestrians.  The really large subway stations may have 15 or more exits, spreading out for blocks and blocks underground, with transfer points for two or three lines, and stores, restaurants, and 7-11s scattered throughout. The station by my house is not very large, having only 5 or 6 exits and serving only the 4 line. 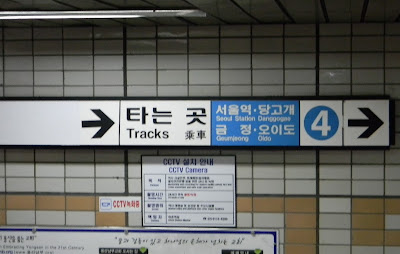 For those of you who have been wondering how I've been managing to navigate through a city without speaking the language, it's worth mentioning that all major subway signs are marked in English, including exits, which are always described as the 'way out.' 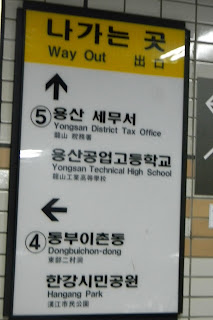 Even the ticket vending and 'recharging' machines are marked in English: 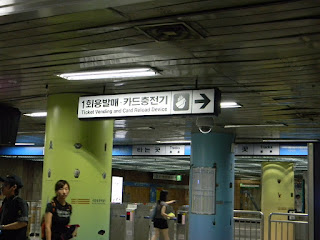 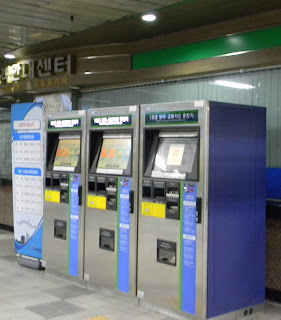 The touch-screen displays on the vending machines give you the option of using English, too. 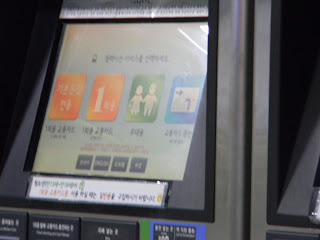 Our subway station includes a little waiting area in front of the turnstiles with 'picnic' tables and benches, fake greenery, and a flat-screen TV hanging on the wall, where people sit and socialize, wait for each other, and, of course, watch TV: Remarkably, all of this remains pristine:  no one sullies the flowers, leaves trash on the tables, graffitis, or tries to steal or damage the TV (located on the wall next to the yellow lockers.) I'd like to think that would also be the case back home, but it's doubtful.


Anyway, trekking through the subway tunnel, up the stairs, you come out on the other side of the street, where the subway opens up to a shady walkway that is adjacent to a playground and a convenient bike rack for subway riders.  Some of them are locked up, but not many.   Remarkable. 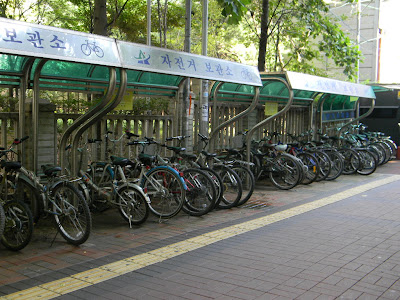 Coming out of the subway station, you often find street vendors; some in trucks, some just sitting on the ground with their wares spread out in front of them.  On this particular day, I was so early that I got there before most of the vendors, but this fruit vendor was just setting up as I walked past: 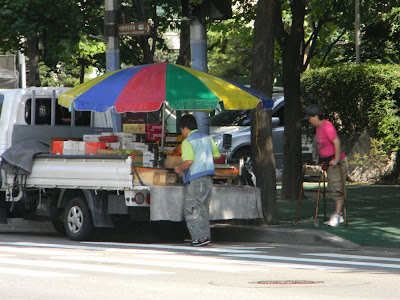 This area is also a popular spot for political volunteers to hand out brochures and leaflets.  Apparently, there is some sort of  hot-topic proposition being discussed right now, because I have been seeing these signs everywhere: 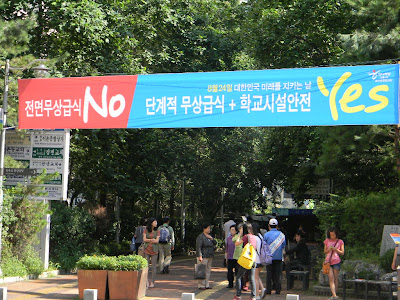 While the use of English is appreciated, it's not particularly helpful, since I don't know enough Korean to understand the issue at hand. You find this frequently in Seoul - just enough English to give you a vague idea of what's going on, but the rest of it is in Hangul.  In this case, I'm assuming whoever hung the banner wants me to vote 'yes' regarding whatever-it-is, since that side's bigger.  I could be wrong, of course, but I'll probably never know.


From the subway, it's just a few short blocks downhill towards the river, past dozens of restaurants, stores, high-rises, and this cute little elementary school, complete with a nautically-themed playground: 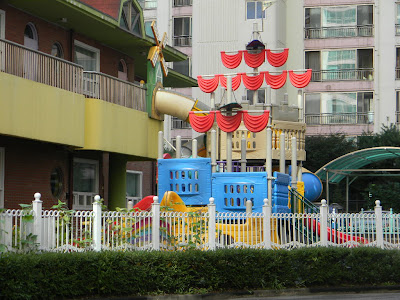 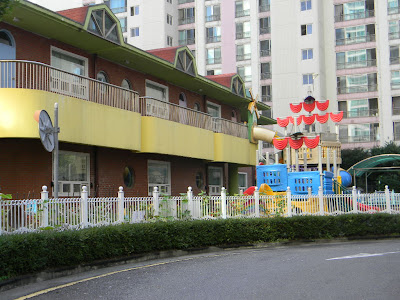 Once you get to the river, it's just a short trip down one of your choice of the many flights of precarious-looking crumbling cement-block stairways which allow you to get right down to the paths by the water. There are both pedestrian-only and cycling paths along much of the river, which are heavily used.  In fact, if you get there late in the day, you will find yourself in a pack of humanity, dodging bicycles, rollerblades, intent arm-pumping walkers, and the occasional tai chi practitioner.  This area along the Han is technically a park and, if you walk far enough to the East, in addition to walking and cycling trails you'll also find playgrounds, picnic areas, workout areas and equipment (that nobody steals....just can't get over this,) and climbing walls - fully equipped with roped routes. The section where I walk is still under construction and is still limited to paths and picnic areas, with surprisingly rural-looking swaths of tall grass, wildflowers, and venerable-looking trees casting their shade all along the trails: 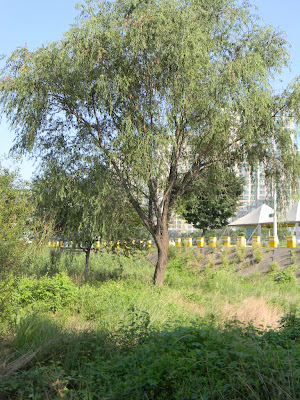 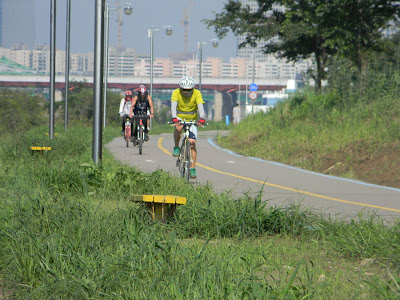 The main cycling path is marked with arrows to tell you which way to ride and includes a separately-marked walkers' lane.  There is also an older, concrete path that runs right next to the riverbank.  The mud all over this path, along with occasional piles of sandbags along the riverbank, are reminders of the recent flooding that took place in Seoul and which did millions of dollars worth of damage.

One of the things you'll probably have noticed is that many pedestrians and cyclists wear face masks of some kind.  I have heard varying explanations for this, from a desire to filter out some of Seoul's big-city air pollution, to a desire to protect one's skin from the sun.  Since you see the masks on both men and women, I'm leaning more towards the air-quality explanation, although it's true that Korean women are very serious about protecting their skin.  In any case, it certainly alarmed me the first few times I saw it, since, in the US, wearing a bandanna over the bottom half of your face is normally an indication of hostile intent (unless the wearer is 5 years old and also wearing a cowboy hat);  however, I soon became used to it and now no longer nervously look around for help every time a menacing-looking fitness buff passes by.
In recent years, the area south of the river has become a very trendy part of the city in which to live, and construction on that side is taking place at a tremendous rate.
Construction and bridges and high-rises notwithstanding, you can still get a lovely view of the ever-present mountains that encircle us: 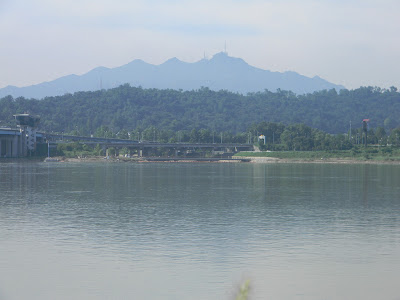 And even the distant high-rises look pretty across the peaceful river in the early morning. 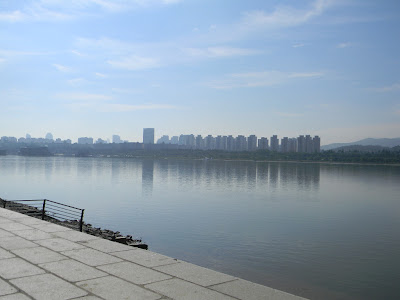 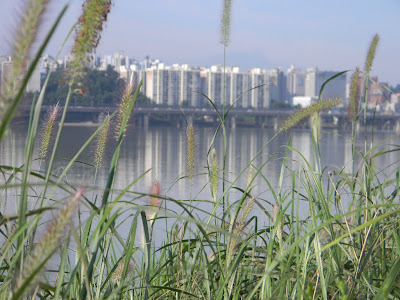 Next up:  Part II:  Walking Home:  A glimpse into the neighborhood right around our high-rise apartment complex.
Directions:
To get to this section of the Hangang Park on the Han River, take line 4 to Ichon station, exit #4.  Walk out the exit and go straight for 3 or 4 blocks and under the bridge.  You will see the river straight ahead.
Email Post
Labels: Han River Sights in Seoul sightseeing

Wilma said…
Love your descriptions. Too funny about the bandanna wearers. Thank you for the directions on how to get to the park for our walk. I think I should just call when I get to town and you can meet me and help me find my way? That might work better. *grin*
August 22, 2011 at 8:03 AM

MsCaroline said…
Oh, Wilma, can't you just jump on the subway and meet me at the station? Th train goes straight from the airport! I'll be waiting by the faux garden. ;)
(Actually, I put the directions in there on the off chance that people might come across this while googling for places in Seoul to visit. I read a couple of Seoul/Korea blogs and it really is nice when they include the directions if you decide to go there.)
August 22, 2011 at 8:24 AM

Trish said…
I really enjoyed that canter round your neighbourhood, thank you. I think the little garden in the subway station is most bizarre but very sweet - and how lovely that nothing gets trashed.
August 22, 2011 at 11:30 AM

MsCaroline said…
Trish, I know, it's amazing, isn't it? The Koreans are just such honest and honorable people, the idea of pinching something just doesn't seem to enter their minds.
August 22, 2011 at 12:59 PM

Christine Cimino said…
Thank you for keeping us up to date with your adventuree. Tell Cullen good luck on his first day of 9th grade. Erik started today at Brandeis.Boy oh boy they are growing fast I remeber when they would come down and make cookies with me.
August 22, 2011 at 1:59 PM

Karen said…
Beautiful part of the world that you chose to go live in! If I could, I would visit you there in a heartbeat. Alas, stuck here in RI...where, in all honesty, the weather has been fabulous this summer. Generally low humidity, lots of sun, not too hot. So...I won't complain or be jealous of your Han River, just enjoy your photos and descriptions. Oh, who am I kidding...thanks for the tour!
August 22, 2011 at 2:13 PM

MsCaroline said…
@Chris- glad I can keep everyone up to date. Hard to believe that our boys are freshmen already - sigh.

@Karen - I would love to be in RI during a beautiful summer, so we're even!

Trish said…
Oh MsCaroline how you make me miss Korea! With the 60+ days of 100+ degree temps here in Central Texas and the hustle and bustle of my life here….I long for a walk or bike ride along the Han River, I even welcome the Monsoon rains! And yes, even I would wear a funky looking mask on my face when I would ride along the Han. I wore it to keep the pollution out as well as the wind that hit so hard in my face along the Han – it seemed stronger there when I would ride. Plus, it helped me look cool and fit in! ;o) I can’t wait to catch up on your blog and start feeling even more nostalgic. I’m so glad you are enjoying and sharing your time in Korea.
August 24, 2011 at 12:34 PM

MsCaroline said…
Aww, Trish, you're too kind! I have to say, the temperature reports coming out of TX don't sound too great, but the rain this summer in Seoul has been pretty awful. I'm impressed you wore one of those face masks - I don't think I'm quite there yet - although I keep telling my family I'm going to buy myself one of those ajumma visors!
August 25, 2011 at 10:18 AM