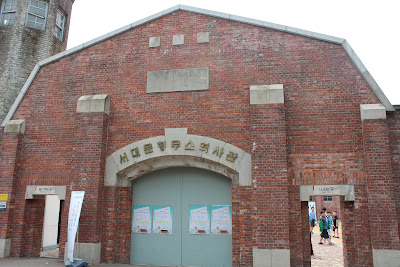 Note:  If - like mine - your grasp of Korean history is a bit vague, let me just give you the briefest of all primers by saying that Korea has a centuries-old history of being invaded by the Japanese- who did so with depressing frequency -most recently in 1905.   Seodaemun - along with a number of other prisons in Korea - was built by the Japanese to house Koreans who protested against Japanese rule or who actively participated in Nationalist movements.  It was originally built to house 500 prisoners, but eventually ended up holding as many as 3000 men and women at a time, who were subjected to torture, forced labor, and incredibly harsh living conditions.  Hundreds (maybe thousands) of them died during their imprisonment and are today looked on as martyrs and patriots of the Korean people.

As I believe I established some time ago, travel blogging is not exactly my strong point.  I'm happy to tell you about the fellow I heard crooning to a potato on the subway on Sunday, or the articulate elderly Korean gentleman who approached me at the bus stop last week and asked me (in English) , "For how long, and in what specific capacity are you in Korea?"  But describing a building and its historical provenance? Meh.  Especially since a quick google of Seodaemun Prison Seoul pulls up approximately eighty-gazillion hits that will tell you everything you could ever want to know about the prison and its history.

However, as responsible(ish) blogger, I would be remiss if I didn't at least give you my basic impressions and (possibly) enough insight to help you decide if you wanted to go see it yourself the next time you happen to be in Seoul. So....here it is:  my take on Seodaemun Prison.

Like America's Alcatraz, Seodaemun is a relatively modern prison (well, modern compared to, say, the Tower of London.)  But that's really where the similarities end, because while Alcatraz housed hardened criminals who (presumably) deserved to be there, Sodaemun was built to house Koreans who'd committed no crime except wanting to run their own country.

So, while Soedaemun has exactly the grim, quiet, ghost-filled air about it that you'd expect, there's also a surprising undercurrent of passionate patriotism and gratitude to the many men and women who suffered and died for the cause of an independent Korea.  It was this undercurrent that I was not expecting, and it did imbue the whole experience with  certain quiet nobility, although I have to admit that the whole torture-beating-misery display down in the basement could have been just a tad less authentic without taking anything away from the overall experience.  (Of course, that might just be wussy me.  The adult males who accompanied me didn't seem to have the slightest problem with it.)

The main prison building has been turned into a series of display rooms which house photographs, blueprints, artifacts (such as clandestine resistance movement newspapers, prison records, and even shoes worn by the prisoners.)  One of the most moving displays is a room which is covered from wall to ceiling with what look like the official 'mug shots' of the thousands of men and women who were imprisoned in Seodaemun over the years.  Further on, there are video and photographic displays of some of the best known patriots of the Nationalist Movement, including a huge portrait of Yu Gwan Sun,  a young woman who was tortured and eventually killed in Seodaemun and who is viewed today as a martyr of the Korean Independence movement.


As you move down to the basement, the displays take a more grisly turn; visitors are treated to tableaux of torture featuring lifelike mannequins: suffice it to say, the Japanese were very creative with their techniques.  There are also video interviews with elderly survivors of Seodaemun describing their torture, and there is even a pretty high-tech interactive exhibit in which your face can be superimposed on a series of images(you select male or female) in which you are roughly dragged through the prison yard by soldiers and then beaten.
There's even a solitary confinement cell which has a recording of a man screaming repeatedly. In retrospect, this would have been a great place to visit right around Halloween.

Once you leave the solitary confinement and torture area, you move into one of the wings of the prison with actual cells.  You can enter some of them, 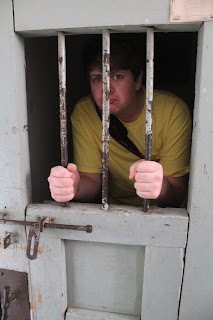 while others are blocked off and still others feature more life-sized mannequins in various states of despair.

Upon leaving the main building, you can tour more of prison compound, including outbuildings, an execution area, an engineering building, a recreation yard (charmingly mismarked as 'playground'), and a unique bowl-shaped memorial sculpture.

A bit more grim and serious than most of our undertakings, but a very worthwhile one, and one in which I learned quite a bit of recent Korean history.  Those faces will stay with me for quite a while.

Seodaemun Prison is located at Dongnimmun Station, Line 3, exit 5  - the prison is located almost immediately on your left as you come up the stairs. This is one of the most accessible sites I have visited with regard to providing English language information throughout the exhibit.  There is an English brochure, and all of the exhibits are marked in English;  many of them have relatively detailed explanations in English as well, and all videos are subtitled in English. This tour can be completed in a fairly leisurely 2 hours or less, depending on how slowly you read and how many photos you want to take.  If you have impressionable young children, this tour might be a good one to skip, although I did see scout-type groups there with children who looked as young as 8 or 9 years old, and a number of families with quite young children (4-5) so this is obviously a matter of personal discretion.
Email Post

BavarianSojourn said…
Well actually, I think you're good at travel writing :) Sounds like an interesting, if not fairly depressing place though. Love the sound of the man singing to his spud and the interrogation you received recently. What did your reply? My other half is in your neck of the woods in the next few days. He had better bring me back some kimchi. :)
June 12, 2012 at 9:05 PM

MsCaroline said…
Well, I suppose I'm bound to improve a little since I'm writing all of these reviews, but I find travel writing more difficult than simply nattering on about whatever pops into my head!
As it turns out, the 'In What Capacity...' gentleman is something of a fixture in this neck of the woods - we answered his questions with just the basics (DH works for a company, 2 year contract with option to extend, blah blah) but we were able to cut the conversation short when our bus came. Biggest shock came when I told him that I was a teacher at the German school and he instantly switched the conversation into very fluent German. I have no idea how many other languages he has, but we've seen him a few times since with his poor defenseless 'waygookin'(foreigner) victims - he's harmless, but very difficult to get away from!
Hope you get lots of good kimchi - right now we are all eating as much patbingsu as we can (red bean shaved ice confection - do you know it? Heavenly, but only available in summer..)
June 12, 2012 at 11:47 PM

Trish said…
My travel writing is also 'simply nattering on about whatever pops into my head' so you're in good company!

MsCaroline said…
Trish - I would love to be able to achieve the style you have -still witty and amusing, but still succinct - my problem is my tendency to go on and on...not ideal for travel writing, I've found.
That's actually Son#1s uni friend who was visiting us for 2 weeks and probably did not expect to be taken on a tour of a prison. My son actually crawled into the 'narrow room' exhibit - a sort of coffin-like box that one can neither sit nor comfortably stand in, and does not lend it self to photography. Definitely a kid at heart, but naturally chose the more macabre option...
June 13, 2012 at 10:39 PM