(Note:  This is the second half of a post about our day trip to Macau, which didn't seem like it would be two posts' worth while it was happening.  You can read part I here.  If you'd just like to get on with it, let me summarize by saying we went to Macau and Son#2 had a reservation at 4pm to jump off the Macau Tower.  When I ended the last post, we had just started heading in that direction.)


We got to the Tower via the City Bus system (which, by the way, is clean, safe, well-marked in English, and easy to use) and paid our fee to ride up to the 61st floor (or whatever it was) where the outdoor observation deck and Extreme Sport people were located.  It is probably worth noting that there is also an 'Extreme Sport' desk on the ground floor, but when we tried to register for the jump down there, they recommended we take the elevator up to the top before paying, since - and I found this to be a hopeful sign - quite a few people get up there and change their minds.   Anyway, the elevator ride was too fast to see anything, so it wasn't until we got up to the top that we really got any kind of a view, which would have been more inspiring if:  A) there hadn't been mist and heavy cloud cover; and B) I hadn't been aware that my son was planning on jumping off the tower.  All the clouds and mist meant that there weren't many people up there except a few intrepid bungee jumpers and sky walkers, who we all watched in a mixture of horror and admiration. I started to feel a faint glimmer of hope that just possibly Son#2 might just pass on the whole experience.


Son#2 wavered a few times and finally decided to go with the 'Sky Jump' instead of the Bungee Jump, which - as far as I could see - was just as terrifying but didn't involve bouncing (note:  MrL had decided not to jump, due more to a reluctance to part with another $350 US than anything, an attitude I encouraged.  One family member hurling himself off a 233-meter tower is enough.)

After paying the fees, getting strapped into the gear and having a brief  'safety' lecture, Son#2 headed out onto the deck to do his jump, at which point I initiated a conversation with a nice couple from Taiwan to avoid bursting into hysterical sobs and shaming myself  forevermore.
So it was that Son#2 jumped 233 meters off the Macau Tower and I was not forced to watch it happen, which was good,  since doing so would have defied all of my maternal instincts.  He returned about a minute later (they unhook you at the bottom over a giant inflatable landing pad and send you back up the elevator,) slightly windblown and unimpressed with what he described as 'the most anticlimactic 233 meters of my life.'  I was so grateful that he had survived unscathed that I didn't even grumble about the astronomical cost-per-second for something so 'anticlimactic.'

Once we'd finished up with the jump(and finally free of the cloud of dread that had been hanging over my head for the last few days,) we headed back downtown (more city bus) to the A-Ma temple, which is: a)really old (1488); b)Taoist; and c)built into the side of a hill.  The temple was originally dedicated to the goddess Matsu, who protected seafarers and fishermen.


Because it was Chinese New Year, it was quite busy with people burning incense sticks and praying, as well as fabulously decorated, and we were fortunate enough to be there when the gong was being struck and specific prayers were being offered (we didn't understand them, but it was really interesting.)  The temple entrance looks very small, but it actually extends back and up into the stones behind it, winding up the mountainside with a series of stone steps, 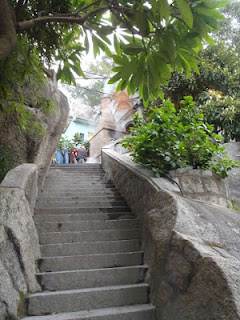 and on each level, you find a number of buildings with shrines to different deities in them, some free-standing, some built into the mountainside.


Several pavilions housed groups of what I initially took to be coils of bamboo but turned out to actually be 'incense spirals' - hanging spiral-shaped incense sticks.  We saw these in temples all over Macau and Hong Kong, and you could often tell when you were approaching a temple well before you could see it because you could smell the incense wafting through the air.

Because the temple was built into the mountainside, the builders had used the stones and boulders as part of the temple itself, and you often saw Chinese characters etched into the stone.  Our favorite spot was almost to the top, under these enormous characters.


By the time we finished at A-ma, we were all getting hungry, and decided to indulge in some Portuguese cuisine at the much-touted A Lorcha, a restaurant near the temple and recommended by virtually every travel guide and person that had ever been to Macau.  Because we had already had our tickets for an 8pm sailing, we needed to eat an early dinner before heading back to the ferry terminal.  It was then that we learned just how authentically Mediterranean Macau really is:  not only did A Lorcha close in the afternoon (presumably for a bit of a siesta) and not re-open until 7pm, but virtually every Portuguese restaurant we saw did the same thing.  After walking all day long, we agreed that what was needed was a place to sit down and enjoy a meal and a drink or two - easier said than done at 6pm in Macau if you want Portuguese food.   One we glumly accepted that Portuguese food just wasn't going to happen in time for us to catch our ferry, we  decided to give one of the enormous nearby hotels a try and schlepped into the first one we came to, the The Sofitel at Ponte 16, an enormous luxury hotel/small casino right on the waterfront and close to A-Ma temple and Sendano Square.  We followed the signs to the 'family' entrance (presumably this is to keep people like us with underage children out of the casinos) and headed into the main lobby.

Like many luxury hotels in Asia, the Sofitel lobby was heavily invested in mirrors, crystal chandeliers and lots of shiny marble surfaces.  When the four of us traipsed in wearing our light hikers, jeans, and sensible Gore-tex jackets to ask where the restaurant was, I'm sure the concierge was debating whether or not to ring security.  After what I'm sure was an intense inner struggle, he graciously informed us that the restaurants were on the 6th floor and gestured feebly in the direction of the elevator.
After walking into several splendidly gilded - and empty - hallways and lounges, we finally found ourselves in the Mistral restaurant at a table overlooking the softly-lit pool and spa and eagerly looking forward to a drink (let me insert here that this is the sort of restaurant where you select your gin from a menu when you order your gin and tonic) and sitting down.  We (reluctantly) decided against the sumptuous dinner buffet on offer (we knew we didn't have enough time to do it justice at that point) and ordered quickly.  The food (French/ fusion/nouvelle cuisine) was excellent and the service was outstanding- although, to be honest, I would have expected no less since we were one of only three occupied tables in the restaurant (Note:  I don't know if this was because we were eating dinner before 7pm (gasp!) or if all of Macau's usual visitors were visiting their families for Chinese New Year, or maybe because Friday is just not a big dinner-out night in Macau.)  We had spent so long looking for an open restaurant, we didn't have time to linger nearly as long as we'd have liked before heading downstairs to the taxi stand and back to the Ferry Terminal.

As I have already mentioned in my previous post, the crossing back to Hong Kong was hardly relaxing, what with the high winds and rough seas, despite the fact that we were traveling, once again, in 'Super' class.
MrL and LC prudently remained unconscious-and, therefore, unaware- for much of the trip, but Son#2 and I remained awake and alert as the ship rose and fell on the waves and our fellow passengers retched and choked and tottered miserably back and forth to the lavatory with seasick bags.  Fortunately for us, we are 'good sailors' (if by 'good sailor' you mean 'does not vomit in rough seas') so we arrived physically unscathed if only slightly traumatized by the experience.

A quick cab ride back to the hotel and a good night's sleep were next on our agendas, since we had plans to get up early the next morning.

We all agreed that we'd enjoyed Macau and would like to go back and spend more time there, since we'd not been able to see everything that we would have liked to, including several other historic buildings and the Macau Maritime Museum as well as the Fishing village at Taipa.  If we were to do it again, we would have considered spending at least one night in Macau to give us more time to see everything.

Oh well.  I guess we'll just have to go back.

BavarianSojourn said…
He is very brave. They would have to pay me to do that! The temple looks lovely, and I like the sound of that hotel... *writes Macau on a list of places to visit one day*
February 22, 2013 at 12:18 PM

Trish said…
I'm laughing at MrL deciding not to do the jump because of the cost. I have one just like that.
You must be torn between being pleased your son survived but rather piqued his experience was anticlimactic. You want it to be terrifying for that kind of money ;-))
February 24, 2013 at 8:32 PM