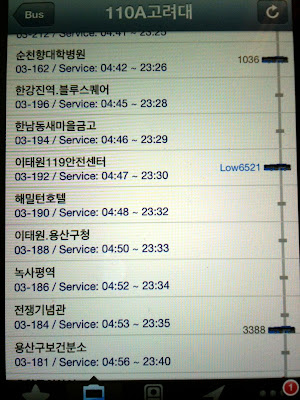 We've been here 18 months now:  in theory, long enough for me to feel settled, comfortable, and like I know my way around reasonably well.  However, there's still a lot that I don't know, and lots that I haven't done.  The top contributor to my lack of accomplishments has got to be my command of spoken Hangul (which, as a language teacher, I would rate on the US State Department Language Proficiency Scale as a '0+' - or "no practical speaking proficiency".)  Oh, I can get around through a combination of limited Korean phrases, sympathetic English-speaking Koreans and serendipity, but I am always aware that I am a foreigner, and the language issue must always be considered when undertaking anything here in Korea.  It's a little sad, but there it is.

When I moved here, I really did think that I'd make good inroads into my study of Korean, and that, at this point, I'd be a lot more proficient than I am.  There are probably several reasons for this, not least of all that I spend most of my days speaking a second language already.  By the time I leave work in the afternoon, I'm having enough trouble sorting out the two I already speak without adding a third.

The point is, after a year and a half, I often feel like I'm woefully inadequate with regard to many aspects of life in Korea considering I've lived here this long.

Yesterday, however, I had one of those moments that made me realize that - while I'm not anywhere near where I want to be - I'm no longer a 'noob,'' and, yes, I am actually starting to get it. I actually know things that are useful.  I have some useful experiences under my belt.  I've been a few places.  I know some customs.  I don't have to call someone for help every time I need to get something done.  In short:  after 18 months, I'm finally starting to be able to pay it forward.

I was walking down the street on the way home yesterday when two desperate-looking Westerners holding a city map flagged me down at the bus stop and asked me how to get to Itaewon (a popular part of town with foreigners) by bus.  I knew they would want to take the 110A, but, I didn't know exactly how many stops away it was - and my suggestion that they just hop on and listen for the stops to be announced in English (the names of stops aren't usually posted anywhere that's easy to see from the window of a bus) didn't go over too well. I couldn't say that I actually blamed them - the idea of just randomly hopping on a bus in Seoul without knowing where you needed to get off would probably have scared me, too.

"Maybe you can show us on the schedule," they said.  "We tried looking at the one posted here at the bus stop to see how many stops it was, but we couldn't understand it."  I walked over and looked at the route map, found where we were, found the Itaewon stop, and pointed to it.  "There it is - Itaewon" I said, gesturing for them to come look and pointing at the timetable.  "See? Four stops away from us."    The man laughed, shook his head, and said, "OK, if you say so"

I realized at that point I'd been gesturing at a bus route printed in Hangul.

Now don't get me wrong.  It's not like I am a fluent Hangul reader or anything - I have to laboriously sound out words and I still can't read them as quickly as Sons#1 and #2.  And I'm not implying that I'm so fluent in reading it that I can't tell the difference between reading in Hangul or in English.  It was simply the fact that I saw the sign and was able to figure out what it said - without actually thinking that it was a big deal.

I knew which bus they needed, how to read the schedule, and how to get them where they needed to go.  I explained to them how to pay their fare, suggested they buy themselves T-Money (transit) cards, and explained that they'd want to exit from the back door of the bus.

After 18 months, I know it doesn't sound like much.  But you know what? I'll take it.  After months and months of having to ask people for help, watch others to find out how to do things, and tearing my hair out in frustration because I didn't understand something, it was wonderful to be able to actually know and share something useful.

So if you're ever in Seoul and need to have a bus schedule slowly and laboriously sounded out for you in Hangul - well, you know who to call.

Nellig said…
Just wanted to say I really like your attitude. It's so hard to learn a language and a culture, and even to stay open to learning and not just get fossilised and somewhat embittered at a low plateau. Rock on, you're brilliant.
February 1, 2013 at 4:05 PM

Anonymous said…
This comment has been removed by a blog administrator.
February 1, 2013 at 6:02 PM

MsCaroline said…
Nellig - thank you so much for the encouragement! There are many days when I feel like I should be so much further along than I am - it's nice to be reminded that, yes, I have actually learned something!
February 1, 2013 at 11:50 PM

linda@adventuresinexpatland.com said…
Well done Ms. Caroline! It's these little victories which accumulate over time and truly do make us feel settled. Somewhere along the line I learned to drop the 'should'ves, would'ves, could'ves' and stop second-guessing myself as to what I 'ought' to be accomplishing. The truth is, I 'ought' to be living my life, plain and simple. When I dispair of my progress in Dutch, I'll remember that at least I'm not wrangling with Hangul.(I didn't even know it was a language, lol)
February 2, 2013 at 9:33 AM

MsCaroline said…
Oh, thank you, Linda! And I know you're right - my progress is coming at its own pace - not some imaginary pace I imagined. I should also have clarified that 'Hangul' is the written alphabet of the Korean language. Unlike other Asian languages, it's phonetic (instead of characters) and can be memorized fairly easily. This means you can sound out words - of course, it only helps if you know what word you're looking for!
February 2, 2013 at 11:07 AM

Iota said…
Good for you!

MsCaroline said…
Iota - thank you! I had a fleeting thought they might be snaps, but the descriptions made them sound like something external (I kept envisioning pom poms)...
February 2, 2013 at 11:33 PM

Naomi Hattaway @ naomihattaway.com said…
Good for you! That is SUCH a great feeling to know enough about your adopted country to help someone out!
February 3, 2013 at 2:49 AM

Trish said…
I can just imagine how grateful the tourists were to have found someone like you to help them out. No wonder you feel a sense of achievement.
February 3, 2013 at 4:06 PM