One of the facts of life overseas is the frequency with which people come and go.  Typically, the summer months are the times of biggest turnover, as they are in most places.  However, expat life being what it is, it's not really a surprise when people come and go at any time of year.  Back in December, our across-the-hall neighbors - a contentious older couple who kept to themselves (by 'kept to themselves,' I actually mean 'avoided human contact like the plague') moved out.  Since then, we've been treated to a regular stream of workmen, realtors, and prospective buyers - but no new neighbors.  We actually haven't minded - the last couple displayed an alarming tendency to engage in heated discussion (by 'heated discussion' I mean 'domestic brawls') on their patio. This was bad enough if all our windows were open - which they are for at least half the year - but was even more unpleasant if MrL and I happened to be sitting on our patio right next door while it was taking place.

In any case, the apartment across the hall has been blessedly empty (and its patio correspondingly serene) for 4 months now, but our halcyon days may be coming to an end.

The first hint of this came when I tried to turn my car into the narrow street by my building this afternoon and found the entrance to our parking garage blocked by a moving van.

After circumnavigating the block and narrowly escaping death by taxi dodging a certain amount of traffic, I was able to get into the building and up to my own apartment, where I discovered that the moving van's hydraulic lift was positioned on the balcony next to mine. 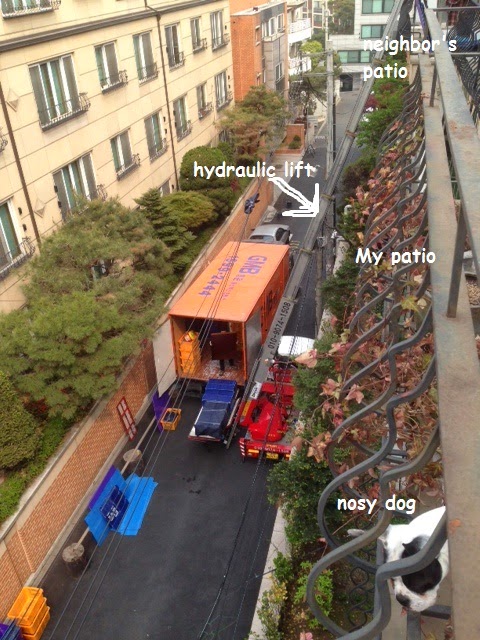 If you, like me, have spent most of your adult life inhabiting one-or-two story suburban houses, then you will be just as interested as I was in how people get furniture into buildings with small stairwells and tiny elevators in a crowded metropolis. Or, possibly, you will not be. We were not actually present when our things were moved into our apartments in Korea, so I didn't get to see how it was done;  I've seen lifts moving furniture in and out of apartments in Seoul, but have never watched the process 'up close,' so this was an excellent opportunity. Anyway, the point is,  the Nosy Dog and I trotted ourselves out to our patio and -under the guise of watering my plants - unabashedly goggled at the Moving Guys and their Really Cool Truck and Lift Arrangement until we were treated to a view of exactly how they get the stuff up there:

No signs of the new inhabitants yet, but there has been a great deal of Lego going up on the lift, so the likelihood seems high that we'll end up with a semi-normal family for neighbors instead of shrieking misanthropes (sounds like the name of a band, doesn't it?)

Elizabeth Musgrave said…
Wow, what an operation! Our problem here was getting the removal van up a narrow lane and steep hillside.
April 23, 2014 at 1:11 PM

Donna said…
My son lives on the upper floor of his apartment building near Camp Casey...I think the 13th floor. It was fascinating to see the pictures they took of the "moving in" process. All their furniture and boxes coming all that way up on the lift and through the window!
Here's hoping for good, friendly neighbors in your future. :)
April 23, 2014 at 3:55 PM

MsCaroline said…
Elizabeth - I can't even imagine! You have so much green space out there, I would have never even thought about there being any problems - but of course, the part that's paved is so much smaller, isn't it?
April 23, 2014 at 9:44 PM

MsCaroline said…
Donna - I wish I'd been around to see when they moved us into our high-rise - it would have been a great post. I see the lifts all the time when I'm driving in traffic - but it's never a good time to take pictures! Hope your son and his wife are settling in well - this is a beautiful time of year in Korea! And just when do you plan to come out to visit? ; )
April 23, 2014 at 9:46 PM

nappy valley girl said…
Lots of Lego...sounds like us (although it's not - we're not moving to Seoul). I'd never thought about how people get furniture into flats really, although I do remember once when my parents had a first floor flat in North London, a sofa having to be delivered through the bay window by forklift.....
April 24, 2014 at 3:24 PM

Stacy Rushton said…
They do the same in Paris. I've seen baby grand pianos swinging from ropes and being hauled up through balcony doors. How fun that you got a close up look! May your neighbors be fun and friendly. And not at all shouty.
April 26, 2014 at 5:30 AM

MsCaroline said…
NVG - I can't remember where we lived (I think it was Germany) that they had to bring the piano (it was an upright, not a grand) through the balacony window - but of course I wasn't there to see it!
April 27, 2014 at 10:48 AM

MsCaroline said…
Stacy - well, so far they are invisible and quiet, so we are not complaining. Neighbors here all nod pleasantly in the parking garage, but there's not much socializing or introducing oneself. But you're right - no shouting is good....
April 27, 2014 at 10:51 AM

Circles said…
What a great way to move! I would have been out there watering the plants and tending to the mint too!
April 27, 2014 at 2:09 PM