Exploring in the UK: A Day Trip to Wells and Glastonbury Tor


One of the things I've been observing about the UK is that it is absolutely, chock full of historic stuff.  Duh, MsCaroline, you are saying to yourself,  everyone knows that the UK and Europe are full of historic stuff.  What other glaringly self-evident observations do you have to share with us? Well, let me tell you what.  It may sound pretty self-evident when you are living somewhere else, but when you are surrounded by it every day, constantly finding yourself passing signs telling you that This building was modernised  in 1740  by the 7th Earl of Chesterwickshireham, it puts a new spin on things.

In the UK, everything is just oozing with history, which means that (to use one of my favorite new expressions) a visitor is 'spoilt for choice.'  Will it be the castle, or the Roman ruins? Druid stone circle? Historic mansion? Ship? Cathedral? Village? How to choose?

And that's the problem.  There is so much to see, you almost become paralyzed by all the options.  And I'm just talking about things that are within an hour's drive of home.  We haven't even started to explore the rest of the country yet, except for Cornwall, which is remarkable and which I will blog about eventually soon.

So you can imagine my relief when, shortly after our arrival in January, I got an email from one of my long-time favorite bloggers, Potty Mummy, kindly offering some suggestions for a few day trips around our area.  I was pathetically grateful.  At last! Guidance! Focus! Help!

I picked the first thing on her list, and this is how it came to pass that we headed out the very next Saturday to Wells and Glastonbury Tor.

Wells is a charming little medieval city in the Somerset district of England.  It is the seat of the Bishop of Bath and Wells (the Bishop's Palace can also be toured) and the location of the Wells Cathedral, built between the 12th and 14th centuries.

The city itself is incredibly picturesque, complete with cobblestone streets and historic buildings, including a fountain in the town square, medieval stone walls, and a Tudor-style historic pub, which is probably why it was chosen as the location for the Simon Pegg film, Hot Fuzz, which concerns a London police officer who is transferred to a (seemingly) idyllic village in Gloucestershire.  It's easy to see why Wells was chosen, since 'idyllic' should be part of its official name:

Since we are huge Hot Fuzz fans, we were probably a little more excited than normal people would have been about visiting Wells, especially when we spotted buildings that had featured prominently in the film, such as 'The Swan' Hotel, and  'The Crown' pub: 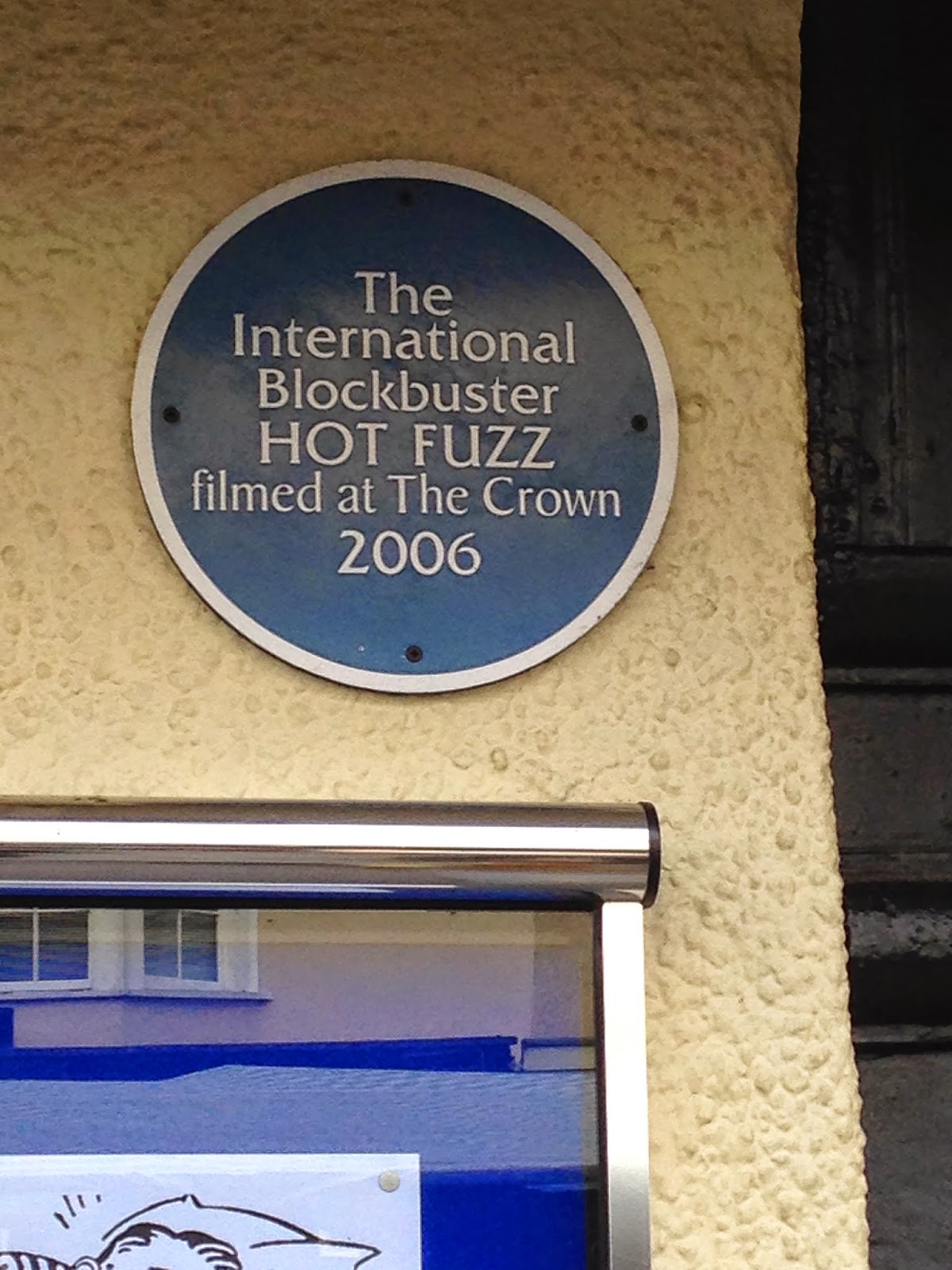 It goes without saying that we had to stop in for a pint. And a bite to eat.  It was an interesting mix of fancy tourists and down-to-earth locals.  We spent most of our time conversing with a man whose Staffordshire terrier was wearing a very unusual garment which piqued our interest.  The jacket was different from your typical dog outerwear in that it looked like it had been removed directly from the sheep upon its demise and placed immediately on the dog's back with no concern about silly things like fit and size. (In fact, I initially thought it was a sheepdog lying there on the floor until I noticed that the dog's head didn't match its coat.) Imagine, if you will, a dog with a Flokati rug tied on its back and you will understand why we were intrigued.  As you can imagine, the owner was the most interesting person we talked to all day.

After our refreshment, we decided to tour the Cathedral, which, as the historic seat of the Bishops of Bath and Wells, was truly gorgeous.  Since MrL took all the interior photos, you will have to take my word for it, or google 'Wells Cathedral.'

But here are a few shots of the exterior: 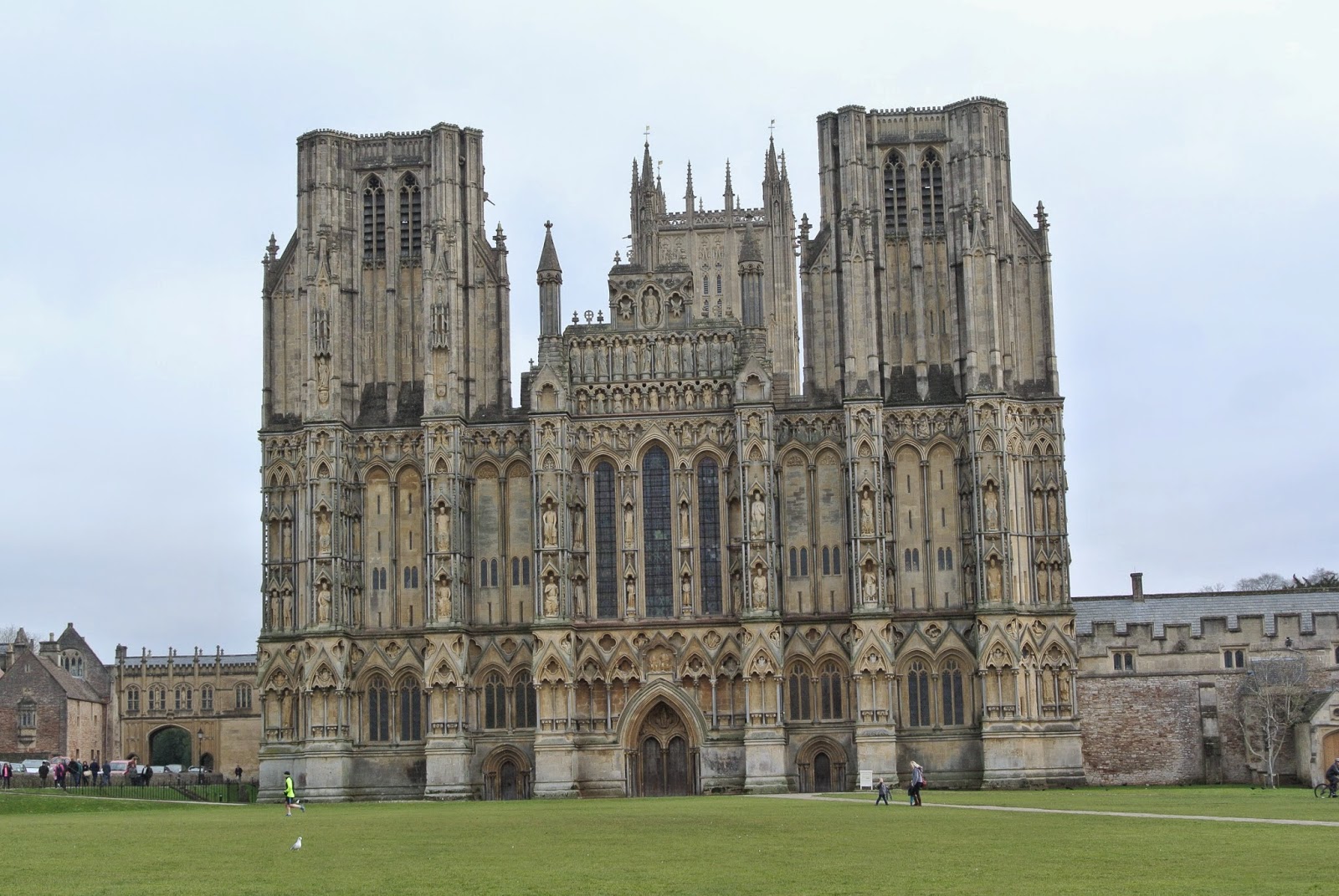 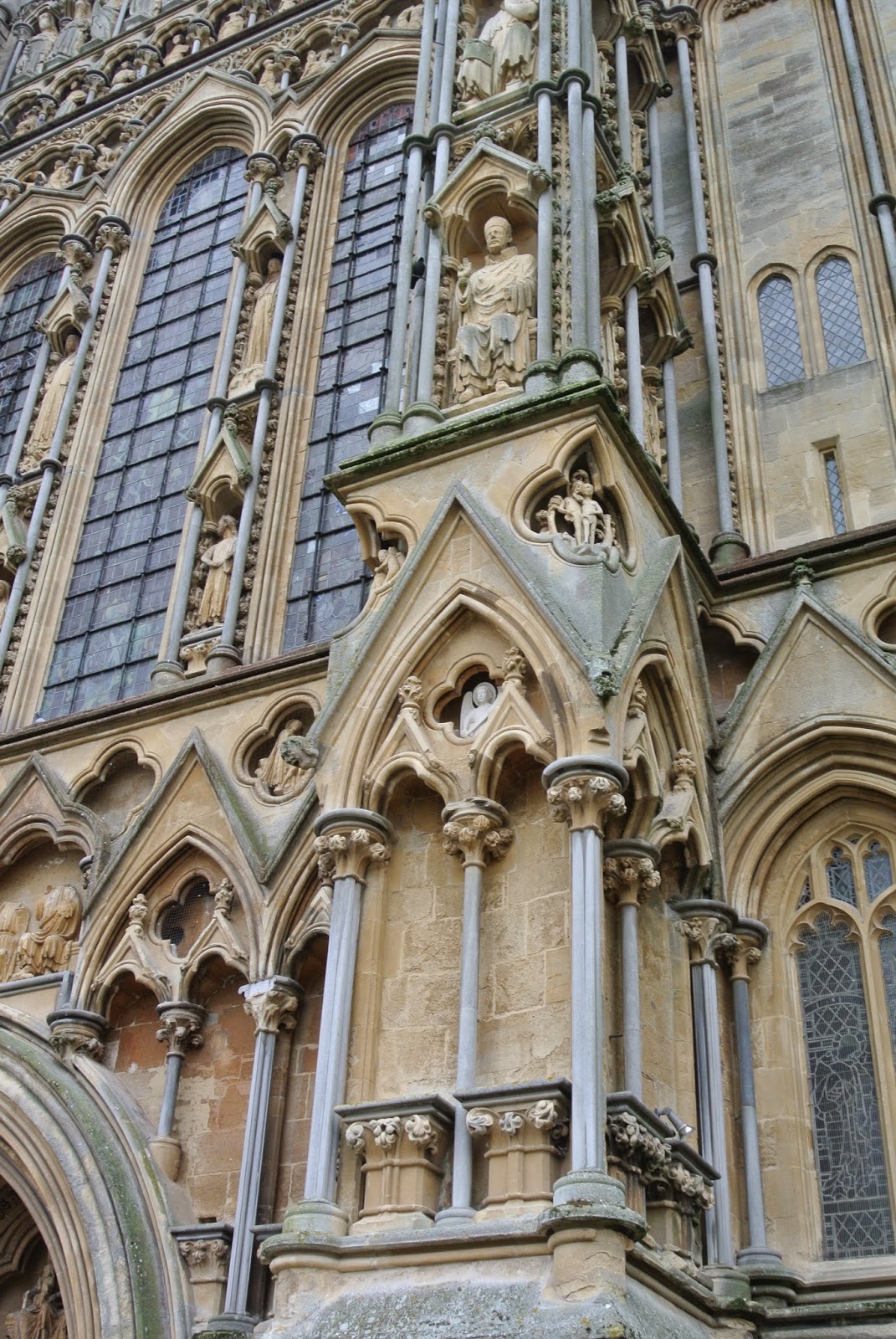 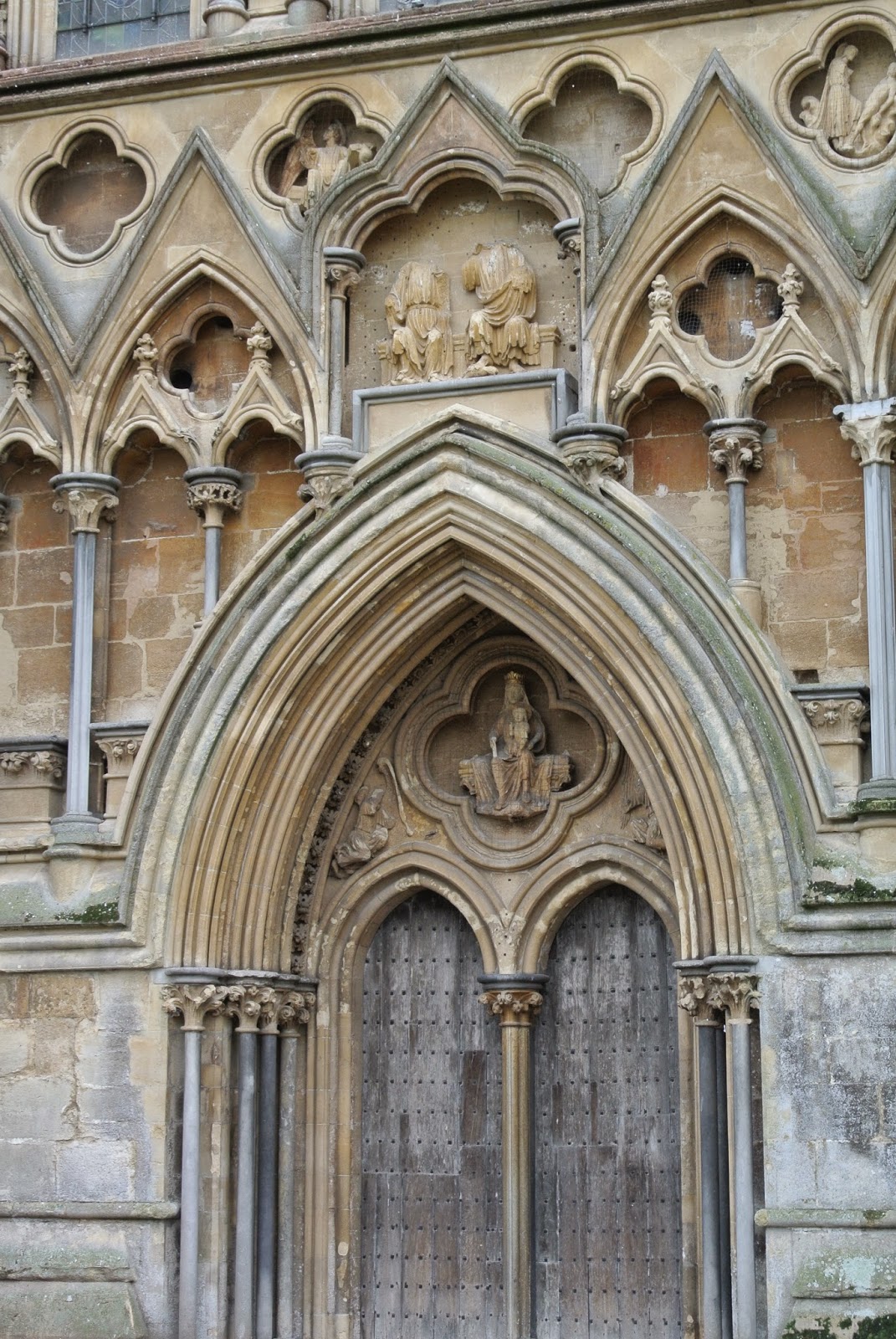 We also took a stroll around the grounds of the Bishop's Palace (you can take a tour of the palace itself, but we were heading for Glastonbury at that point,) which featured a moat (our boys would have appreciated this when they were younger) complete with swans: 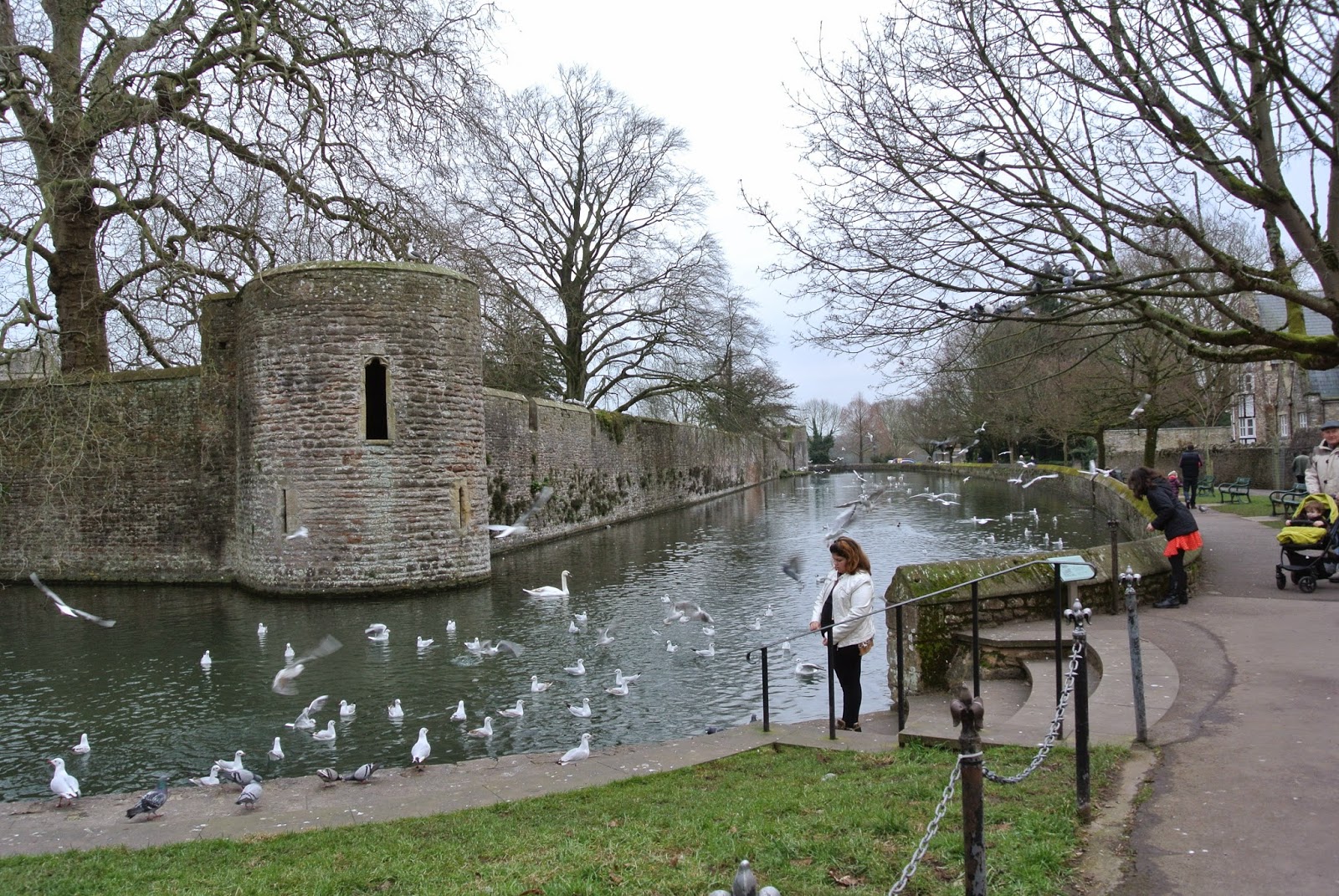 After a stroll around the moat, we set our sights (and the GPS/SatNav) on the next spot on our itinerary:

For those of you aren't interested in don't have time to read up on it, 'Tor' just means 'hill or rocky peak.'  It is also described in other places as a 'prominent hill.'  It is supposed to be a significantly spiritual location, a former place of pilgrimage for Christians as well as a meaningful site for Pagans. Legend also links the Holy Grail of King Arthur to this site.  At its peak today sits nothing but a lone tower, which may have been part of a church that was planned (or built) here in the the 15th century.


Even if it were not historically and spiritually significant, the Glastonbury Tor would be worth hiking for the views alone.  The view of the countryside is sweeping, and on a clear day (which we, sadly, did not have) you can supposedly see all the way to Bath (miles away.)

Setting our GPS/SatNav, we drove into the countryside and soon found ourselves approaching the Tor.  It turns out that most people enter from the direction of a town called 'Burrow Mump' (I will never get over that name, by the way) which is where you pick up the concrete footpath leading to the top.  However, due to a really annoyingwacky and laughable SatNav glitch, we found ourselves on the other side of the Tor, on a lane backing up to some fields. After seeing a knowledgable-looking party wearing waterproofs and wellingtons striding purposefully in what we thought looked like the right direction, we ended up parking on a side road, following a  public footpath through someone's sheep pasture (I love how you can do that in England) eventually joining the concrete footpath about halfway up with a crowd of other breathless hill-climbers.

Despite a bit of drizzle, there were plenty of people out, and, as with so many outdoor venues in England, there were more than a few dogs along for the adventure, which, in their case, involved chasing rabbits.  The grassy hill area around the Tor is absolutely crawling with wild rabbits - you saw them, their holes, and their poo, everywhere.  (Another good reason to stick to the footpath - both of us came close to breaking an ankle- and wellingtons are a good idea, too.) MrL even suggested that this might have been the inspiration for the cover of Watership Down, and I'd be inclined to agree.

If you go:  Wells is a charming medieval city ('the smallest city in England') about an hour's drive from Bristol or Bath.  Glastonbury Tor is about a 15-20 minute drive from Wells.  There is no National Trust car park, but there are public (fee-paying) car parks at Burrow Mump, Glastonbury Tor, and Collard Hill (if you don't fancy parking on the roadside like we did and hiking cross-country.)  You don't need to be an athlete (trust me, I'm not one), but you need to be fit enough to walk up the steep uphill path.  There are benches halfway up if you need a break.
Email Post

Trish said…
I haven't been to either of these places despite having lived in England for half a century. You're right - so much history in a small country and we still never get to see all of it. I think Wells is worth a visit - my son is a Simon Pegg fan so would love seeing the film locations for Hot Fuzz.
April 21, 2015 at 2:00 PM

Potty Mummy said…
Thanks for the shout-out, and for a much more informative post on this trip than I would ever have gotten around to writing! (Glad you enjoyed yourselves)
April 21, 2015 at 2:37 PM

Nance said…
I share your admiration of the name "Burrow Mump", thoroughly.

All of this hiking about is going to give you impressive calves in no time. Also that enviable British glow in the face that I keep seeing all the time on television--dewy countenance with a natural blush.

BavarianSojourn said…
I loved this post. A little corner of my beloved homeland! :) I spent many a summer of my misspent youth either at Glastonbury festival or up on top of the Tor! :D
April 21, 2015 at 7:56 PM

Stacy Rushton said…
One of my Australian friends who lives in London has caught the British walking bug, hiking over hill and dale, from village to village, with a tribe of like-minded friends, guided by ordinance maps and a compass. I am ever in awe. Well done, you, for hiking up that hill! Between the two of you and your lovely photos, I'll see the length and breadth of that small island yet!
April 22, 2015 at 6:04 AM

MsCaroline said…
Trish - Oh, they were both gorgeous - although I have to admit, we were both quite excited about Wells - we even watched 'Hot Fuzz' again the night before we went, just to be prepared! Potty Mummy says there is actually a 'Hot Fuzz' tour you can sign up for that shows you all the locations from the film - we may go back and do that when #1 is visiting in May.
April 22, 2015 at 10:16 AM

MsCaroline said…
Clare - It was the least I could do - we wouldn't have known anything about it if you'd not told us! I still have your original e-mail saved so we can try out some of your other suggestions!
April 22, 2015 at 10:17 AM

MsCaroline said…
Nance - The names here are too fantastic. Near us is a town called 'Pucklechurch' and another called 'Coombe Dingle.' I enjoy it every single time I see them on a signpost! As far as the calves go, it's hard to see any muscle definition under my protective layer of fat, but I'm sure it must be there. The dewy 'natural blush' is probably a result of minimal sun exposure combined with lots of outdoor exercise. I think I've spent too many years in tropic or Southwestern sun to qualify for 'dewy.' I'm afraid 'leathery' is the word that comes to mind....the GA-rahj sofa is ready and waiting!
April 22, 2015 at 10:21 AM

MsCaroline said…
Emma- what a fabulous place to misspend your youth, and we are soooo enjoying your homeland! I really wish we'd had better weather for the Tor - now that we know how easy it is to get to (and where to park) we can head back early some sunny weekend morning and get a really good view.
April 22, 2015 at 10:23 AM

MsCaroline said…
Stacy-yes, the walkers are everywhere, aren't they? I see those ordinance survey maps everywhere, but don't quite trust myself to get to the right place with just a map and a compass. If I'm ever lucky enough to meet up with some 'like-minded friends,' maybe I can catch the walking bug myself!
April 22, 2015 at 10:25 AM