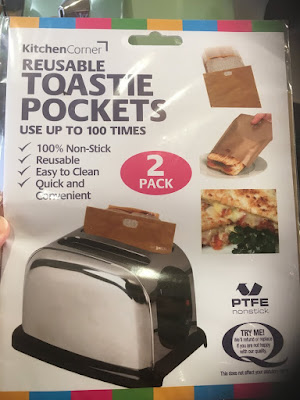 MsCaroline would like to express her thanks to all her kind readers who expressed sympathy and concern about her Lingering Cough as a Result of the  Flu Bug From Hell, and would also like to assure them that she is, in fact, clearly on the road to recovery. The clearest indicator of this is the fact the MrL is no longer doing all the laundry, which, while a bit sad, is a small price to pay for an unrestricted airway, and MsC will take it.

A surprising number of you also expressed interest in/amazement at the Toastie Pockets MsC mentioned in her last post, which was extremely gratifying, since she brought them to nearly everyone last summer when she was in the US and felt like the general response was more 'puzzled' by them than 'thrilled.'  In all fairness, maybe people just are not thinking 'toastie' quite as much in the summer as they are in January, so the takeaway here is this:   it's all about the timing.

In any case, after such a warm reception, MsCaroline had the bright idea of showing you step-by-step how these nifty little things work ,because this will be easier than writing an entirely new blog post.
Of course, I am neither a food blogger nor a food photographer, so you'll have to use your imagination to a certain extent. But we all know that's better for you anyway.

In any case, without further ado, I give you

How to Make a Toastie Using a Nifty Toastie Pocket

Step 1:  Sort out your bread:  As far as I can tell, the toastie pocket is sized to fit slices of typical pre-sliced, commercial bread.  Since we buy bread in big, hearty farm-style loaves that looks like it was made with pieces of bark and twigs with as few processed ingredients as possible, the slices are invariably too large to fit in the pockets, so you want to make sure your bread fits in the pocket before you get started. In our case, I always have to cut off a side or an end or something.  If you don't like crusts anyway, you are ahead of the game:

Step 2:  Decide what you want on your toastie, and make your sandwich.  You can put what ever you want in your sandwich, including condiments and sauces.  The pocket catches the drips, so you don't need to worry about your toaster getting mucked up with mayonnaise or what have you.  If you like butter on the outside of your toastie (more like a grilled cheese), then, by all means, have at it.

Step 3:  Insert sandwich into Toastie Pocket:  (I squash mine a bit first, due to crazy thick bread.) 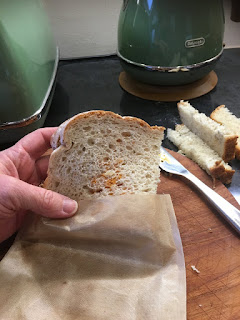 Step 4:  Pop it in the toaster. I don't like my toast very dark, so our toaster is usually turned toward the lighter end of the toast spectrum.  Putting mine on #2 usually works. 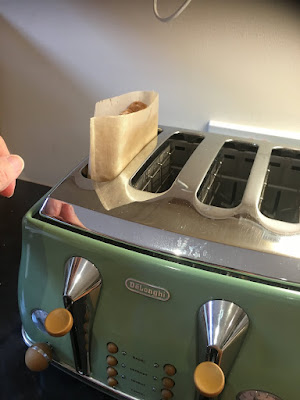 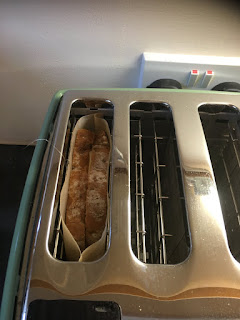 In this case, since the cheese wasn't as melty as I liked when it was finished, I popped it back in for a few more seconds until I reached my personally-preferred level of meltitude: 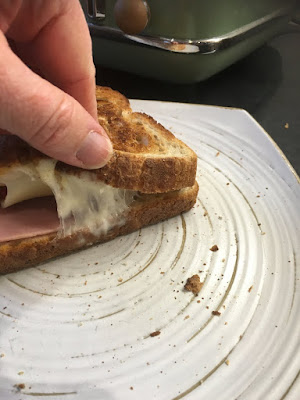 Step 5:  1) Marvel at the fact that you have lived an entire life without knowing that this was even possible and 2) eat your creation.

As with everything in cooking, of course, results will differ, based on your toaster, your bread, your fillings, and who knows what else.  I have burned a toastie or two trying to find the perfect balance between the level of bread toastiness and cheese melty-ness(final assessment:  better to put the setting on low and check at intervals than put it on high and risk burning.) I will also concede that a toastie made in the toaster might possibly taste less awesome than one made in a skillet or in a panini press, but no one can deny that this method requires much less effort, and I am all about minimal effort.

While I'm confessing, I should add that I have also only concocted cheese-based sandwiches thus far.  Yesterday, however, a comment from Nance on my last post suggested a banana-and-Nutella combination that had never, ever occurred to my own limited imagination - but has been haunting my every waking thought intriguing me ever since.

I'll let you know how it turns out.

Trish said…
This is simply marvellous. I am grateful to you for taking the time to photograph the proceedings - did you have to clean your toaster first as it looks very shiny?
I do think you could have gone even further and made a little video for us - couldn't you have asked MrL to be in charge of the recording now he has been relieved of laundry duties?
January 25, 2016 at 4:32 PM

MsCaroline said…
Hahaha...no, did not clean the toaster, but it is relatively new - we got rid of all our small kitchen appliances when we moved to the UK. Trust me, no unnecessary cleaning happens here! As far as video goes - God Forbid! First of all, I have no desire to be on video, and, (more to the point) if I waited for MrL to have some free time to help me with making videos, my blogging frequency would be far worse than it already is!
January 25, 2016 at 5:29 PM

Karen said…
Looks very interesting!!! I'm rather intrigued by your toaster, since I have not owned the like for some (very long) time. Think I switched to a toaster oven back in my single days so I could cook my lonely chicken breasts and pork chops without heating up the whole oven. Did I mention that I am cheap? Neil calls me Frugal Fanny, lol. Anyway, I am thinking that these toastie pockets might work in a toaster oven as well? Or does the heat need to be close on both sides?
Sorry to hear that you have been sick, missed that somehow. Thankfully, we are all well and healthy here. The monster blizzard was not so monstrous here and we got a tame and measly 10 inches over the weekend. Not even a snow day out of it!!! And my Patriots lost! Still a good weekend, no obligations other than the usual groceries and laundry. Hope you are all well, scattered as you are. Did Cullen get buried?
Love,
Karen

MsCaroline said…
Karen - I hear you, Frugal Fanny! I have a microwave that is also a convection oven and use that all the time unless the pan is too big to fit (very rare these days, since there's just 2 of us to cook for.) I'm pretty sure the pockets would work in a toaster oven - if nothing else, you could turn the pocket over halfway through, but it looks to me like the teflon kind of radiates the heat and contains it anyway. But frankly - couldn't you just stick a sandwich in a toaster oven without the pocket and get the same effect? (I've never had a toaster oven and only used one on a couple of occasions on vacation, so I'm clueless!)

Thanks for the sympathy, I am (finally!) over the stupid cough. I really can't complain - I haven't been unwell a single time since I moved here, which is a pretty good track record. I just feel like I've been wasting the past 3 weeks of January lying around inside and feeling too miserable to do anything. Now that I've (sort of) got my mojo back, I'm already in the getting-ready-for school mode. My course at the University starts up next Wednesday. Fortunately, just one night per week, but I still have plenty of work to do to prepare for classes - same old, same old. Sorry about the Patriots - I knew there was a lot of misery in New England this past week! Cullen got buried in NYC but didn't let it stop him - he went to work the night the blizzard came in! He and his friends had a blizzard party and I think it's going to be one of those fond freshman year memories for many years to come!
January 26, 2016 at 6:54 AM

What a wonderful demo, and I am more than ever convinced that we need these for The Boys. I will scour local Dollar Havens (in disguise, lol) to see if they have them. Anything that saves them from (cue the Doomsday Music) WASHING A PAN will be greeted with much enthusiasm and joy.

I am also fond of brie and red grapes, thinly sliced apples and smoked gouda or sharp cheddar, and even peanut butter with a slice of cheese. I'd better get a packet for us, too.
January 26, 2016 at 3:59 PM

MsCaroline said…
Nance - good luck, but don't pay exorbitant prices for them. I saw them on amazon.com for $9.99 (for a pack of 2) PLUS $5.60 S&H. Keep in mind they cost about £1 here in the UK (maybe a bit more if you buy them anywhere except at Poundland like I do) - $1.50 or so. They're nice and all,but frankly, not worth $15.60 for a pack of two. Or maybe that's just me. My cousin found them on amazon.ca at a more reasonable price, so you may want to keep your eyes open for some when you make your next trip Up North. The apples and cheddar sound fabulous. My problem is actually remembering these option when I go to make myself a sandwich. I always seem to default to ham and cheese or tuna salad or some other unimaginative workhorse of the sandwich family.
January 27, 2016 at 10:17 AM

nappy valley girl said…
How ingenious. And are they really reusable?

I have a sandwich toaster that makes lovely melted cheese sandwiches but only ever use it at weekends as it requires cleaning afterwards. I can see how these would make your life a lot easier.....

BavarianSojourn said…
I had no idea these actually worked! :D I will be thinking of all sorts of weird and wonderful things to put in them. I loved toasted peanut butter and salad cream when I was a student. I was probably drunk at the time...
February 3, 2016 at 9:52 PM

MsCaroline said…
NVG - yes indeed! They are made of teflon or something - and just wipe clean. If they get really mucky, I wash them off with a bit of washing-up liquid, turn them inside out, and leave them in the dishrack to dry for a bit. They're made of something sort of like nylon (teflon?) that doesn't absorb anything, so it's more of a wiping-off than an actual scrubbing. They're really brilliant.

Emma - Oh, they work alright! Pick some up next time you're home and give them a go. I don't even know what to say about pb&salad cream - I think you're correct to chalk that up to drunkenness...