Life in England: The 4th July in England or Hot dogs and Fancy Dress

If you are in the US at the moment (as most of my readers are,) you are probably engaging in/getting ready to engage in/have already engaged in some typically American 4th of July behavior, which probably includes sunscreen, drinking beer, eating food cooked outdoors and accompanied by some sort of red-white-and-blue dessert that contrives to look vaguely like Old Glory and probably features Cool Whip and/or strawberries.  If you are lucky, a pool, a lake, or a beach is involved. If there are little kids around, there may be sparklers, and if you are really lucky, you will be somewhere that you can see the professional fireworks easily when it gets dark without having to sit in traffic forever on the way there or back.  Or, if you are in Texas somewhere large and rural, with benign fireworks regulations, you will shoot some off yourself.  There will be mosquito bites and sunburns, and someone will have a child that is so worn out after a day of sun and fun that he will fall asleep on his Daddy's shoulder and stay there for the rest of the evening, sleeping peacefully, a little sweaty and smelling of sunscreen, while Daddy deftly drinks beer with the other hand and continues his conversation.

However, we are not in the US, which means that MrL had to get up and go to work this morning just like everyone else in the UK, because (of course) it is not a holiday here.  And while it may be sunny and warm somewhere in England at the moment, here in the South West, where we live, it is overcast and 66 deg Fahrenheit and threatening rain.

In other words, it is just a regular day.

Last year on the 4th (a Sunday) MrL and I 'celebrated' by doing The Bath Skyline walk. While it wasn't a traditional picnic/party/cookout, it did include sunshine, beer, and being outdoors, which ticks the important boxes in our books.  As it happens, the Walk goes through woods and meadows and past a sham castle and gives you breathtaking views of Bath in addition to steering you right past the The American Museum in Britain, which we did not know in advance, but which we found suitable to the occasion.  It was gloriously hot and sunny, and we ended up walking about 9 miles all told (the Walk itself is about 6) with a lovely refreshment stop at a pub along the canal on our way home.


This year,  we ended up celebrating not once, but twice, which - if the truth is told - is more celebrating than we usually did when we lived in the US.  The truth is, the 4th always came as a bit of a shock to me, usually right about the time when I would get an invitation to someone else's  4th of July cookout/pool party/lake house and realize that it was once again upon us. (Honesty compels me to admit that is the way I approach most holidays, but I digress.)  So we always did something, but it wasn't usually a very big deal. (I could write a whole series of posts on why this is the fault of my expat upbringing or my Canadian mother, but the truth is that I am just poorly organized in the summer.)

This year we were invited to a gathering of some of the American expatriates in MrL's company; we'd done the same sort of thing in Korea, and even been able to watch fireworks at the American army post in Seoul. So there was no question that we'd be observing the holiday in at least a small way. But that wasn't our only 4th of July option.

As it turns out, the neighborhood we live in now is adjacent to a small local park which puts on a 'Picnic in the Park' every July, with live music, food, a bar, games, contests, and even a children's Fancy Dress Parade (that's 'Costume Parade' to the Yanks in the group.) 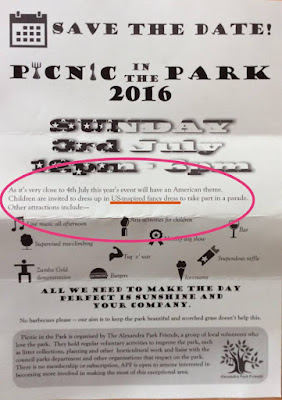 Notice the stars-n-stripes theme they have going in the font? Yep.  And (in case you can't expand the photo) the wording was very specific:  "As it's very close to 4th July this year's event will have an American theme. Children are invited to dress up in US-inspired fancy dress to take part in a parade."  Before I saw this flyer, I would have estimated that roughly the same number of my English neighbors were aware of the 4th of July as most Americans are of November 5th in England (Guy Fawkes/Bonfire Night).

Clearly, I was mistaken, because it was obvious that every single British person reading that flyer was expected to know all about the 4th of July without even a little asterisk to clarify things.  (I'm assuming all of my US readers know about Guy Fawkes, but I don't know that I'd feel safe applying that assumption to the entire US population in general.)

Needless to say, MrL and I were intrigued and had decided to stop in at this event before heading to our next social engagement (my, aren't we in demand?) if for no other reason than to see what the children were wearing for costumes.  After all, we Americans don't have any traditional costumes like so many other countries in the world. My mind ran through the various costumes that I, as an American, would think of as 'US-inspired:'  Pilgrims.  Cowboys. Southern Belles, maybe? Army guys?  NFL football players? Baseball players? Baseball's American, right? Like apple pie and Chevrolet? Wait, they play it everywhere now and it's really bigger in Japan than it is in the USA now, anyway.  Wait, maybe American football? Nah, they have a European League now. Hell, what do they wear?

I had a bad moment there, envisioning the angelic British children of my neighbors parading themselves round the Park dressed as Honey Boo Boo, the Kardashians, and Donald Trump, but logic prevailed, and I went back to my original guess of Cowboys and Pilgrims augmented with, possibly, a few Native Americans.

We wandered up to the park, listened to the band, bought some raffle tickets, enthusiastically supported the bar, and talked to our neighbors, keeping one eye out for Cowboys and Pilgrims in the crowd, since we had to leave for our next engagement before the Parade, but were intensely curious as to what this 'US-inspired' theme would produce.

So - what were they all dressed as?

Mostly Spiderman and a few Batmen.  We also saw a couple of nonspecific princesses and something that looked like Tron.  But mostly - superheroes.

We were a bit surprised.  Honestly, I'd not made the connection at all, but after some thought, I realized they do all have American accents in all of their movies, so the connection was reasonable - even if MrL and I wouldn't have made it ourselves.

For the rest of the day, I asked every Brit I ran across about this;  what did they think of if you said 'Fancy dress' and 'American.'? All of them responded with, "Superheroes."  None of the Americans I talked to came up with anything similar, though.

I'll never tire of new perspective and new ways of looking at my own culture.

And I'm glad none of them came dressed as Honey Boo Boo.

Nance said…
Recently returned home from a Canada vacation, Rick and I discussed this post. We agreed that we aren't upset in the least by the US being symbolized by superheroes. We rather like it. After all, in lots of movies, the villains have cool, detached British accents. The superheroes come in and rescue people, save the day, maybe with a lot of Michael Bay bombast and explosions, but we are Good and Strong and Prevail Over Evil. We stand for Truth and Justice.

Oh sure, superheroes are Over The Top, but their powers are Used For The Good Of Others.

MsCaroline said…
Nance - I'm not upset at all, either. Just a bit surprised. As I said, cowboys, pilgrims, baseball players came to mind, certainly not superheroes. But it's was a very nice surprise, especially when one runs across so much anti-American sentiment in most other circumstances. It's not always pleasant to see yourself as others see you, but in this case, it was a pleasant surprise.
July 6, 2016 at 10:43 PM

Trish said…
Did you not dress up as Honey Boo Boo, MsCaroline? How disappointing!
I must admit, I don't think I would have instantly thought of superheroes. I'd have gone for a cowboy ensemble, I think, or maybe a saloon girl.
July 12, 2016 at 2:44 PM

BavarianSojourn said…
That's hilarious, although I am rather sad nobody turned up as Donald, so many good fancy dress opportunities there! Yes, it's one of those holidays that we know very well in the UK, probably through films and media. I happened to visit on the 4th July once and I am very glad I did - first introduction to S'mores! :D
July 14, 2016 at 10:23 AM

MsCaroline said…
Trish - I suppose it was an opportunity missed. I can assure you my neighbours would have appreciated it. Maybe we'll have a Halloween party.... As far as costumes go, I will need to break this to you gently, but -apparently - it's a generational thing. I would have thought cowboys, too, and a couple of my (ahem) older neighbours said the same thing. All the younger people with small children immediately said, "superheroes.' Clearly there is some pop culture going on that we've missed!

Emma - a Fancy Dress Parade with mini Donalds would have been entertaining-yet-terrifying - much like the reality! It is funny how many people here were aware it was the 4th, though - some people at MrL's work asked if he planned on taking the day off! It had not occurred to him that a national holiday back home dedicated primarily to getting sunburnt and drunk could be parlayed into a legitimate excuse for taking a day off in England. ; )