Life in England: Takeaway in the UK

(Note;  For those of you who are curious about the photo above, Deliveroo is a delivery service in the UK (and, I believe, other parts of Europe and Asia) which provides delivery service from a number of different restaurants, some of which normally don't even provide delivery service. Here in Bath, the delivery people are usually seen on bicycles, which is impressive, given that the hills around here are pretty brutal. Apparently they use motorized vehicles in other cities in the UK, but around here the sight of one of these ultra-fit young people toiling up a hill with a Deliveroo box strapped to their back (or the bike) is quite common.  MsC does not know for sure, but can only assume that there is something like this in North America as well.  Or not.)


Along with all of you, MsCaroline has been observing with abject horror great concern the political madness going on at home and abroad.

Here in Great Britain, people are still getting over the post-Brexit shock (whether you were for or against leaving, no one can deny it's rarely a good thing when all the people who led a campaign for something jump ship once they realise it's actually going to happen. But -I digress.) Over there in the USA, the ever-present spectre of gun violence, now mixed in with the whirling vortex of presidential nominations and the party conventions are providing escalating speculation as to the End Of Times and countless FaceBook feuds.  And of course, the situation in Europe is not exactly encouraging.

MsCaroline, who is an anxious worrier by nature, has done all she can to affect the outcome of world events within her small sphere of influence by volunteering, donating, voting, and sharing (within reason) her opinions and any information that seems unbiased and useful with anyone who seems inclined to listen with an open mind.  But ultimately, the final outcomes of these things are beyond her control, and this -if one thinks about them too much - can make a person insane with fear.

So this is why MsCaroline has decided that it is time for her to discuss a topic we can all get behind, feel good about, and appreciate - namely, food.  In this case, specifically, takeaway food (what we call 'carry out' in the US.  Unless that's changed and I don't know it.)

Let me start off by saying that we are not huge fast food/delivery/takeout fans. When we lived in the US, we would order the occasional pizza or Chinese food, but it was certainly not a regular thing.  Maybe once a month, or less frequently, say, if the boys had friends over or a bunch of us started drinking early on Friday afternoon and suddenly discovered it was 7pm and there was no dinner I was busy and needed a break from cooking.

When we moved to Korea, we initially didn't order much at all - mostly because we didn't speak any Korean, but also because we had dozens of restaurants within a very short walk of our apartment. Eventually, we learned how to order things online (or  we had a Korean friend with us to do the talking.)  Again - it was far from a regular occurrence.

Then, we moved to the UK, and MsCaroline found herself back in a land where she could (theoretically) speak the language (at least enough to order takeaway,) and it was glorious.  One could get anything from Ethiopian to Thai to the more mundane pizza or chicken.  In fact, your typical takeaway/delivery place in the UK offers a huge variety of foods, from pizza to burgers to fried chicken to fish and chips to kebabs. Really.

While MsCaroline can take or leave the pizza, the burgers, and the fish and chips, it was soon evident that  she had met her downfall when she saw the kebab menu.  Why? Because the Doner Kebab is one of her all-time favourite foods. 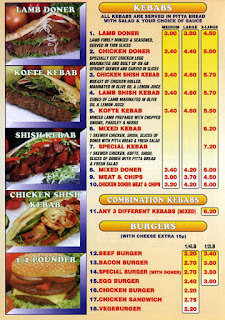 The Doner Kebab (or just, "Doner" for aficionados) is of Turkish origin - it's sort of like a Greek gyro, although it tends to look and taste differently depending on where you find it.  Back when MsC lived in Germany, the Doner was a bit spicier and could feature shaved meat or more traditional kebab-type chunks.  But the basic recipe remained the same:  some sort of flatbread stuffed with delicious spicy meat (lamb is traditional, but chicken and beef are options), salad (usually lettuce, cucumbers, onions, tomatoes, red cabbage and banana peppers) and a tzaztiki-type yoghurt sauce. It is spicy, crunchy, creamy, and delicious all at once. It is (mostly) healthy:  meat and veg and a yoghurt sauce (yoghurt's healthy, right?) And if you are worried about carbs, you can even ditch the bread and feel moderately virtuous.


It is, in short, a Beautiful Thing, but not a Thing that MsCaroline ran across very frequently when living in the US.  In Korea, there was a "Mr Kebab" not far from her home, but there was always a huge queue in the shop, and on top of that, they didn't deliver (in retrospect, probably a good thing.)

Imagine then, if you will, MsC's delight upon moving to the UK and discovering that practically every takeaway restaurant in the UK has, as a matter of course, Doner kebabs on their menu, along with Pizza, chips (that's fries to you and me) garlic bread, burgers, and pretty much anything else you can think of - and they'll even deliver if you can't be bothered to get yourself there to pick it up.

Of course, MsCaroline is no fool.  While she would love to eat Doner kebabs every single day, she knows better.  So she and MrL limit themselves to the occasional Doner.  Say, once every couple of weeks - not really that often, right?

Well, those calls add up, and, after 18 months in the UK, MsC has begun to realise she might have a bit of a problem.  Not just because her jeans were tight (although that's certainly an indicator.)

Maybe it was when she entered her favourite takeaway's number into her mobile's 'contacts' list, instead of looking it up every time.

Maybe it was when she no longer bothered to even look at the menu.

Maybe it was when she knew the total of her order without having to be told.

More likely, it was the last time she called, when the conversation went like this:


MsCaroline is not saying she has a problem.  But she understands that admitting it is, after all, the first step.

(Note:  MsCaroline would like to point out that 'my love' in British English is roughly the equivalent of 'hon'  or 'darlin'' in the (southern) USA and in no way indicates anything but a strictly professional relationship between her and the Takeaway Guy.)

Nance said…
Oh, it's okay. Here at the Dept. we've Been There, Done That with our local Chinese restaurant years ago. At first, it would happen when we gave our phone number; later, it was after we gave our order; finally, it would be the moment Rick or I would say, "Hi, we'd like to order some carryout?" The thickly accented voice on the other end of the line would burst out happily, "Oh, oh! I know you! How you doing, okay? Everybody family okay? Good, good!" And once I had his daughters in class, their father (the owner of the restaurant) used to add, "Lin doing good? Do all her work?" And it didn't matter which of the girls it was, either. They both were named Lin (although one went by a nickname).

Peter (pretty positive that's not his given name...) sold out to a relative and retired, so we miss that personal touch now when we order food. It's not nearly as Joyful an experience.

I would love the Kebab Cuisine to take hold in the US. The closest thing we have here in NEO is, of course, the Gyro, but most of them around here are not wonderful.
July 29, 2016 at 3:04 PM

MsCaroline said…
Nance - I'm glad to hear we're not alone - the personal touch is pretty gratifying, isn't it? I have to say, I would have been OK with a gyro if we'd ever had any available in TX, but the only time one could decent, freshly made gyros was during the annual Greek Festival at St. Sophia's. We went through a brief period where we bought the ready-to-prepare gyro kits, but they were invariably just disappointing. A well-made gyro is nearly as good as a doner in my book.

Wilma - can you imagine the shape your cod and chips would be in by the time they got there if they *did* deliver to Tucson? You're probably better off just driving to San Diego. ; )
July 30, 2016 at 8:05 AM