Distance Parenting or: The Curse of Modern Technology 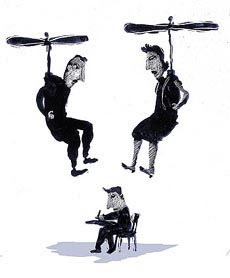 Deepest thanks to all of my readers who sent me such kind words of encouragement after my last pitiful little 'I'm -so-sorry-for-myself-because-my-son-is-at-University-in-the-US-and-I-had-to-come-back-to-Korea' blog post.  It's been just over a week since I got on the plane and left him behind to the tender in loco parentis mercies of the impersonal University system, and - up until yesterday - things seemed to be going swimmingly.

Thanks to the wonders of Skype and FaceBook instant messenger, MrLogical and I have been able to chat with him at odd times during the week and ascertain that he had been tested and enrolled into appropriate courses, had a suitable meal plan, had enough money to pay for his books, and found his new roommates (when they returned from Christmas break) to be congenial.  He'd driven up to Dallas to see a concert and visit some high school friends, test-driven the new mountain bike (purchased for him by his bicycle-loving father supposedly as a means of getting around campus but really as well as a means of kicking a** on the mountain biking trails in TX), and was, in general settling in.  As I said, swimmingly.

Yesterday morning (here in Korea) MrLogical and I - enjoying a day off, thanks to Lunar New Year celebrations - caught him in passing on Instant Messenger over our morning coffee.  After a brief chat about generalities, the IM was taken over by MrLogical, who wanted to discuss Son#1's mountain bike  As the conversation devolved into MrL holding forth on the technicalities of bicycle maintenance schedules, I leaned back with my coffee, only half paying attention to the words popping up between the on the computer screen.  Just as I'd almost decided to go do something more interesting else, Son#1 typed - in passing, mind you - that he had a 'scratch or cut or something' on his face that he thought might be infected - sustained during his ride on Friday  and was thinking that he would visit the University clinic the next day.  As you may imagine, I was instantly on alert and once again fully involved in the conversation (no doubt much to Son#1s utter chagrin.)

And, of course, when MrLogical and I (insisting on a video session on Skype after this statement) saw his face - looking very much like he'd had several teeth extracted, or was suffering from a terrible one-sided case of the mumps - we insisted suggested that, instead of waiting until the next morning, he get himself to Urgent Treatment.  Immediately.

(Note:  Having been through a harrowing ordeal a number of years ago involving a drug-resistant infection that had taken up residence in  MrLogical (quote from the surgeon:  "I think we can save the leg"),  I am  probably more cautious than the average bear when it comes to infection, but my personal motto - as paranoid as it sounds - is "Never Fool Around With Infections That Are Close To Your Brain" and I stand by it.)

Accordingly, Son#1 made his way off to the nearest Urgent Treatment Center, where they ascertained that, yes, he did have an infection and, yes, he did need antibiotics. Strong ones. The kind they use for 'serious infections'. (See? I'm not as paranoid as you thought.)

But there was more.  Once diagnosed and armed with the prescription,  Son#1 was able to experience the joys of driving around the city on a Sunday night in the dark and cold with a painfully swollen face - and hay fever to boot -, trying to find a 24-hour pharmacy, doubtless wishing he had never mentioned the damn cut to us in the first place, and knowing full well that, although there was nothing more that he would like than to  simply go back home, get in bed, and get the prescription filled in the morning, it was patently impossible, because we,  his parents, would nag him electronically, long-distance, by all possible means until the prescription was filled and we were satisfied that he had, indeed, begun treatment.

Enough to make any university student wish for the bygone days of the  70s, 80s and 90s when the only way parents could nag long-distance was via the telephone.


(Note:  As of this writing, Son#1 is responding well to treatment, no longer looks quite so much like the Elephant Man, and has just returned from having two rocks medically extracted from his thumb as a result of a (completely different) mountain biking escapade, causing MrLogical to burst with pride.  It's going to be a long semester.)
Email Post
Labels: leaving for University medical care parenting

Frances said…
Pleased to hear that your No 1 is on the mend...you must have been very worried. We took our No 1 son to Balliol ( Oxford) around 16 years ago, and he had neither a mobile phone or internet access in his room...it was 2 weeks before he finally phoned us!! So I know how you must have been feeling. I never thought I would be too bothered, never mind the total "bereftness" that I felt. ( and he was only an hour and a half away from home) It was not so bad with the other 2 boys, but I think No 2 had a mobile by the time he went to Uni some 3 years after his brother ( to Leeds)
January 24, 2012 at 9:04 AM

Trish said…
Seems to me this is all MrLogical's fault, buying him the bike in the first place!

I was getting all stressed for you, reading this. I think I'm going to be a nightmare when Rory eventually leaves home.
January 25, 2012 at 2:23 PM

MsCaroline said…
Frances - 'bereftness' is the perfect word to describe it, although Skype and mobile phones have helped immensely.

Iota- 'simple and stylish' sounds so much better than 'unable to crop and upload a photo!'

Trish - yes, it does seem that way, doesn't it? Why he can't play golf like other husbands, I have yet to understand. Let's hope that Rory stays in country - my problem is that I won't even get the occasional weekend visit!
January 25, 2012 at 9:53 PM

Karen said…
Oh, boy...what a start to his college adventure! I so totally agree with your policy about infections that are close to the brain, knowing first hand what infections can do to the brain! So glad that son #1 is doing better and so glad that Mom was so quickly "on the alert" to casual statements. Mr. L (who I always thought I kinda liked...even though I have never met him, he looks nice) is on shaky ground with me after buying that clearly dangerous toy for his son. What is it with these guys!!! How is the new job? Fallen asleep during any meetings lately?
January 26, 2012 at 2:31 AM

MsCaroline said…
Karen - it is precisely because MrL is so nice that he can get away with encouraging these dangerous sports (did I mention he is also a rock and ice climber?)...I'm torn because I guess there could be a lot worse things than having a kid who likes to be physically active in the outdoors and to stay fit...working on the whole 'letting go' thing. And I was very comforted by the fact that Son#1 had already made plans to go to the clinic - would have been much more worried if he'd not planned to go at all! I think he has been acting prudently - it's just very hard not to be there. And of course you can identify with the 'infection/brain' thing - was reading your PANDAS comments on the KF board...a bit alarming! Hope all will soon be sorted out at your house in that regard but maybe the attention from this NY case will help shed some light on the whole thing.
January 26, 2012 at 6:12 AM

Elizabeth Musgrave said…
Frances's comment strikes a chord! We took our eldest daughter to Oxford about the same time and she had not mobile or internet access. She too rang, after a week or so. She was fine and had a ball. I was astonished that, despite my high powered job which I had thought might protect me from the dreaded "empty nest", I too was utterly bereft for a while.
January 29, 2012 at 4:08 PM

MsCaroline said…
Elizabeth- have to say that starting my new job so soon after getting back from the US was probably the best thing that happened - it has definitely helped me keep busy and keep my mind off of things. Can't imagine how my own parents felt leaving me at Uni in the US and flying back to Germany - letters and very rare long-distance calls were the only contact they had with me!
January 30, 2012 at 12:28 PM