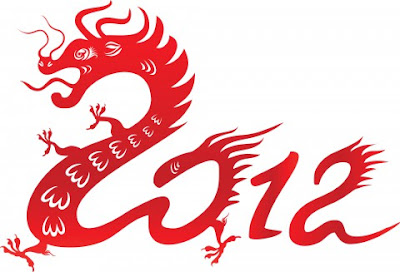 For those of you who may not celebrate the Lunar New Year (OK, so, most of you), this New Year's Post may seem shamefully outdated.  However, if you do celebrate - or are even aware of - Lunar, or Chinese New Year (as it tends to be called in the US, although obviously the Chinese don't have a monopoly on it), then you realize that I'm not really that late - only 7 days, actually.  This year is a Year of The Dragon (Korean and Chinese zodiac signs go by year, with each sign occurring only once every 12 years) and is supposedly a quite lucky one.  (Since MsCaroline is, herself, a Dragon, she has enjoyed hearing all of the complimentary and attractive Dragon qualities attributed to her in the last few weeks, but is positive that such qualities as "a loud voice" "bossy" and "irritating" must surely be mistranslations.)  Since it's our first Lunar New Year in Korea, I felt that, as a responsible blogger, the least I could do would be to share a little of what I have learned about the celebration of Lunar New Year in Korea, and pass it on to you, my readers.
On January 23rd, Koreans (along with the Chinese, Japanese, Vietnamese, and Mongolians) celebrated the Lunar New Year, which, according to Wikipedia, "generally falls on the day of the second new moon after winter solstice, unless there is a very rare intercalary eleventh or twelfth month in the lead-up to the New Year. In such a case, the New Year falls on the day of the third new moon after the solstice (next occurrence will be 2033)."  What this meant to me and my family as expatriates in Korea (besides the fact that I don't know what the word 'intercalary' means) was an excellent 4-day weekend, during which Seoul more or less emptied out, which was delightful.  Except that pretty much everything was closed on Monday, which I had completely forgotten to plan for when doing the shopping the previous week.  But I digress.
Lunar New Year, or 'Seollal' in Korean, is typically spent with family, and, according to what we had been told, our Korean friends and co-workers would be traveling to visit parents or grandparents, where they would participate in preparing an abundant feast which would first be offered to their ancestors at a family shrine as part of a ritual ceremony before being eaten.
After the meal, all would pay their respects to parents and other older relatives by performing an elaborate ritual bow while wishing them health, happiness, and luck in the coming year. What is particularly exciting for the children is that, after they perform their bows, they receive cash.  In fact, Son#2 informed me that his Korean friends at school were extremely excited ("More than Christmas!"-which, by the way, many of them do celebrate) about this holiday, because apparently - depending on the number of elderly relations one has - it can be extremely lucrative, and, what with the cost of MacBooks these days, every penny (or in this case, Won) counts.  In case you're interested in what the ritual bows look like, I've included a few YouTube videos:  One, with a demonstration showing how to do the male and female bows (warning:  you'll have to sit through a Korean RedBull advert first)
This one includes the children of the family performing the bow and being duly rewarded by relatives:
And this touching one that I am pretty sure was made by a family far away from home and sent to parents and grandparents:

In any case, since we weren't celebrating Seollal with our families, MrLogical and I took the opportunity to visit the Korean Folk Museum, which was hosting a number of New Year's cultural activities, including traditional games and a Year of the Dragon dramatic presentation.  Actually, we weren't really clear at all on the Dragon presentation, which - reasonably - was in Korean and therefore difficult for us to follow.  We assumed that the large animal (which, to my mind, looked remarkably like Mr. Snuffleupagus) was, indeed, a dragon, but we have no proof, and, since it did not look like the dragons of my childhood years in Taipei, I could only make a guess.  In any case, the drama (or presentation, or fable, or whatever it was) involved a number of traditionally-dressed characters and this dragon*, who, only moments into the presentation, began to collapse, quite dramatically on the pavement, apparently suffering from an unknown illness: 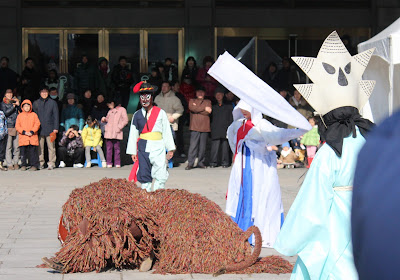 The rest of the play subsequently involved a number of traditionally-dressed persons (Shaman, acupuncturist, noble gentleman) attempting  the dragon*s revival, a certain amount of unintelligible (to us) Korean dialogue, and some lovely ritual bowing: 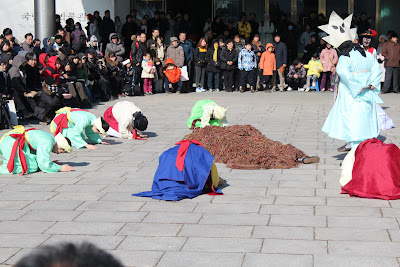 Apparently, whatever was done to revive the dragon* was successful, because, after everyone had been put through their paces - and a lot of gong-banging and drumming - we were rewarded with the eventual resurrection of the dragon*, complete with a joyous procession throughout the courtyard, accompanied by enthusiastic applause, rousing song, and general satisfaction by all concerned. 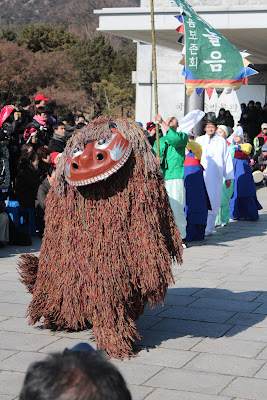 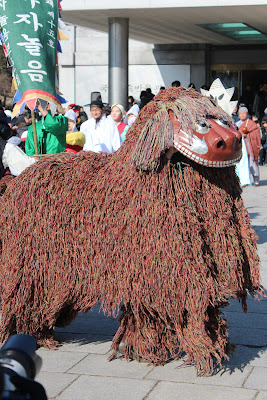 We also had the opportunity to have our New Year's fortunes told by a Korean shaman (fortuneteller).  (You will all be happy to know that, according to ancient wisdom, if I happen to have a baby this year (unlikely without divine intervention), it will most certainly be a boy.)  Finally, before leaving, we visited the 12 statues of the Korean Zodiac (identical to the Chinese Zodiac) and had our photographs taken standing next to 'our' statues.  Me, next to the Dragon: 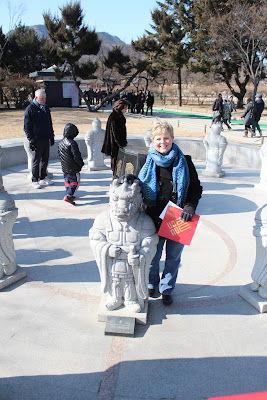 MrLogical - somewhat less enthusiastically - next to The Rabbit: 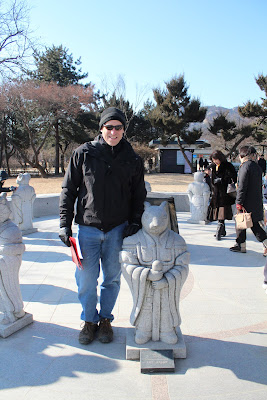 새해 복 많이 받으세요 !!!! (Receive many New Year Blessings/Have a blessed New Year!)
*While I am not 100% certain he is, indeed, a dragon, I've made a reasonable guess based on the information available to me at the time.
Email Post
Labels: celebrations Korean culture new year