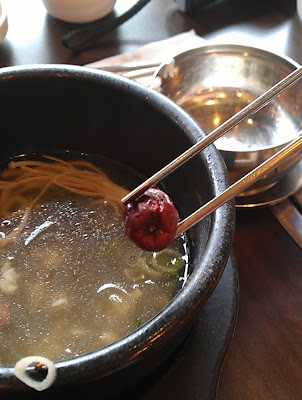 For those of you who have wondered 'What is it really like to live in a foreign country?' Let me give you one tiny example of a typical incident in our daily lives.

MrL, Son#2 and I decided to get some lunch yesterday, and Son#2 and I ordered galbitang, a Korean short-rib soup which contains (besides the short ribs) daikon radish, mushrooms, green onions, and glass noodles.  In this case, it also featured the lone red, wizened item pictured above.

Now, in the US, had an unidentifiable object made an appearance in my soup, I would have either:  1) summoned the server and asked what it was:  2) removed it and ignored it, or 3) eaten it anyway.  Naturally, in Korea, things are a little different. Even if I had been able to say, "What is this?" to the wait staff (and I still can't *hangs head in shame*), they would have been unable to convey the information to me in a language I could understand anyway.

I asked MrL (who eats out with Korean co-workers on a daily basis.)  He had no idea.  Son#2's helpful guess was:  "It's a cranberry," (A cranberry? Really?) which I promptly dismissed.

With no other useful information coming in, I was faced with a common expat dilemma:  Do it eat it, or not?

Because MsCaroline is an adventurous spirit who embraces all that life has to give (and also because it was clearly a plant-based item and therefore unlikely to turn out to be brains or intestines or some sort of squid.) she went with option #3.

Reader, I ate it.

It was mildly sweet (I had feared it might be something in the chili-pepper family and had my water  at the ready), and - as soon as I bit into it - the flavor was instantly recognizable.

A Google search once I got back home confirmed my identification, although it took some serious sleuthing to find it. I was also surprised to find that very few traditional galbitang recipes include this particular ingredient.

I know that I have at least one serious foodie reader, so I shall throw down the gauntlet   :What do you think it is? Correct guessers will receive my eternal admiration and the glory of public recognition when I reveal the answer tomorrow.

Stacy said…
Looks like a rehydrated salt prune or plum.

I had to laugh at your story and it reminded me of a meal in Jakarta many years ago. We ordered fried chicken. The plate came full of crispy bits that had obviously been hacked apart by a machete (called a parang there) wielding maniac. I picked up the only recognizable piece - the leg - and crunched on the end. It was the head, still connected to the neck. Ommph.
August 11, 2012 at 10:11 AM

Stacy said…
I change my vote to a ginko berry. I figure it got stained red by the soup. I couldn't find any fruit of any kind in a recipe for that soup so I am guessing it was put in for medicinal reasons.
August 11, 2012 at 1:48 PM

linda@adventuresinexpatland.com said…
I'm going with crabapple. Loved this post because I totally followed your analysis. Once you know it isn't guts/brains/organ, etc., you can breathe a little easier (and bolder)!
August 11, 2012 at 9:30 PM

MsCaroline said…
Barbara: Multiple guesses are allowed and even encouraged! But sorry...not quite.

Karen: Nope, but in the right neighborhood!

MrC: Hilarious and mellifluous, but - fortunately for me - incorrect.

Marion: Oooh...you're right, it's something dried!

Stacy: You and Marion are moving in the right direction!...oh, and 'gingko berry' is also reasonable, although the smell of them on the pavement when they drop turns my stomach! As far as the chicken goes - did you follow through and eat it?

Circles: Ha! No, nothing nearly that easily identifiable!

dkuriowa: You're in the right direction - it was dried.

Linda: it was crabapple sized, but (personally) I prefer the flavor of a date. And you're right: it's much easier to be adventurous when you know you're not about to eat something that will traumatize you!
August 12, 2012 at 1:19 AM

BavarianSojourn said…
A plum? That soup sounds delicious though whatever that is :)
August 14, 2012 at 6:37 AM

Trish said…
I quickly scooted over the post with the answer in it so I could have a guess. I'm thinking some kind of chilli pepper.