In Which Mother Nature Has The Last Laugh 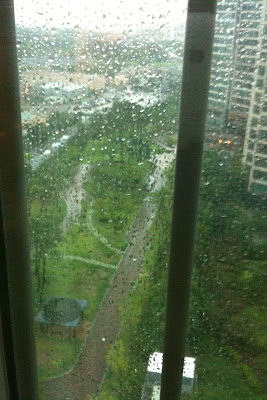 Those readers who have been following AsiaVu since its inception will likely remember that, not long after she moved to Seoul last summer, MsCaroline began her expatriate blogging career with a month-long whinge about the weather.  (In all fairness, the July after she arrived did turn out to be a record-breaking one, complete with rivers overrunning their banks, flooding highways, and historic levels of rainfall.) This is very unusual, long-time Seoulites pointed out:  Yes, it usually rains a lot during the summer monsoon season, but this year it's extremely bad.  It's not normally like this.  Readers who stuck with me were eventually rewarded in August with clear skies and more whining - this time, about the humidity.

Over the course of the following year, MsCaroline learned that the weather in Seoul is fairly consistent and tends to change in a very predictable manner, almost to the calendar date.  As such, things cooled down and became glorious right around mid-September and remained that way well into November, followed by a bitterly cold and snowy winter which gave way (in April, right on cue) to a glorious Spring.

Naturally MsCaroline took all this into account when making her reservations for Home Leave and very cleverly planned to get the hell out of Dodge leave at the first of July (when the monsoon period typically begins) and return at the first of August (when things typically calm down and get back to being Hot and Humid but Mostly Dry.)  Off she flew, laughing up her sleeve at having cleverly avoided the worst of Monsoon Season in Seoul and reveling in the beautiful sunshine of a Summer on the East Coast.

Those of you who are familiar with the concept of dramatic irony will, of course, have no trouble guessing what was awaiting her upon her return.

MsCaroline arrived in Seoul (still very pleased with her clever planning) to sun and humidity as expected, followed by - unexpectedly - torrential downpours.  That's right:  after a surprisingly mild July monsoon season (MrL:  "It really wasn't bad at all this year") Seoul is now experiencing what I can only assume is an equally surprising August, featuring rain, rain, and (you guessed it) more rain.  Oh, we've had a few dry days here and there, but for the most part, this is what we've been looking at for the past week or two: 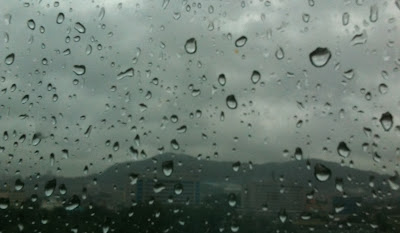 Everyone else is walking around, shaking their head and murmuring How unusual this weather is for August - it really doesn't usually rain like this at this time of year.  Very strange.  According to the weather people, this is all somehow related to an unprecedented number of typhoons and tropical depressions and El Nino and God knows what else.

But MsCaroline isn't buying any of this climactic mumbo-jumbo.  She knows exactly who's to blame for these crazy weather patterns, the driving rain, this unusual August monsoon.

Trish said…
That often happens when we go on holiday, we get the 'oh it's not normally as bad as this'. We got this in Portugal last year regarding the wind. Thankfully Sweden behaved itself!
August 21, 2012 at 8:08 AM

MsCaroline said…
Wilma - thanks. I expect it to dry up and become gorgeous as soon as I go back to work....

Trish - Maybe your influence is stronger the further south you travel - as long as you limit your traveling to Scandinavia, you may be safe...
August 21, 2012 at 8:48 AM

Stacy said…
As the quote goes, "The best laid schemes of mice and men..."

Best of luck for the new school year! I am sure you are right. It will clear up as soon as you are stuck inside.

BavarianSojourn said…
Sods Law I do believe! When we first moved to Copenhagen we arrived to the worst winter in 48 years. Apparently that was my fault! :D
August 21, 2012 at 10:24 PM

Unknown said…
I dunno Caroline, I'd keep that information to yourself! Imagine if the scientists discovered your ability to control the weather out there!

BTW, if I remember right, didn't we leave Panera's to go out to a RECORD BREAKING STORM in Virginia? Yes we did.

Some awesome powers there girlie!