Chuseok in Taean: A (Proper) Review

In my last post, I shared a few life lessons learned during our recent trip to Taean during the Chuseok holiday, promising to follow up soon with a proper review about the area and our stay there (as opposed to musing about crowded train stations and why an otherwise rational middle-aged woman would eat raw cuttlefish.)  So, without further ado - our trip to Taean.

As I said, the AsiaVu family had decided to take advantage of an invitation from friends to join them for the holiday at a western beach - Taean - in a province called Chungcheongdo, about a 3 hours' drive southwest of Seoul.  The 8 of us left very early on Saturday morning from varying points of departure and made the drive with varying degrees of trauma.  The drive down to Taean was scenic and rural - a pleasure for those of us who are used to the endless skyscrapers and crowded streets of Seoul.


Our ultimate goal was the beach in Taean, but we initially ended up overshooting our destination slightly because someone didn't program the GPS correctly and landed on the beach at a scenic overview in the nearby Taeanhean National Park, which consists mostly of high pine ridges overlooking a gloriously wild and rocky coastline:


A little reprogramming of the GPS took us 30 minutes south and we arrived at our destination no worse for the wear.  Our gracious friend M, who speaks Korean, had planned the weekend and arranged lodging for us in a pension.  (As in Europe, these are usually a sort of inexpensive guesthouse or boarding house, more homey than a hotel.) Having not ever stayed in a Korean pension, we weren't quite sure what to expect, but ended up being very pleasantly surprised.  In our case, the pension in question -Pension Blue Lagoon (note: this site loads best in Explorer - doesn't seem to like my Google Chrome) was a series of detached houses on a ridge overlooking the the Yellow Sea.


Most of the houses were divided into one or more apartments, each of which contained a small kitchen with cooking equipment (as in most traditional Korean establishments, this means a stovetop and a rice cooker but no oven for baking), refrigerator, sink, and basic dishes and cutlery.  Our unit contained a large washer/dryer and also a fireplace, although we did not use it. Most of the units we could see had, like ours, sliding doors with a view of the ocean, a large outside deck with picnic tables, and a grill.
Our unit included a bedroom with a western-style bed, but also included a closetfull of yos- traditional Korean sleeping mats - as well as blankets and pillows.


In addition to the basic accommodations, this pension also boasted a 3-story building on the property that we initially thought was just a cafe', but which turned out to be more of a clubhouse, containing decks overlooking the beach, a cafe (only operational in the summer months, but open for guests to sit in and enjoy at all times), a rooftop swimming pool (we didn't use this, as it was too cold, but it looked gorgeous) and two noraebang; private karaoke rooms which could be rented out by the hour.

Once we had all arrived and gotten more or less unpacked, it was time to start thinking about what we were going to do, and there were plenty of options:  hiking, cycling, beachcombing and fishing (although we didn't fish) were probably the most popular options.  T, a member of our party, brought his sea kayak as well.


The pension is located right near several hiking trails of varying lengths and difficulty: 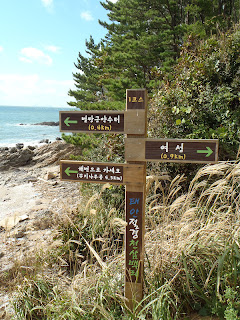 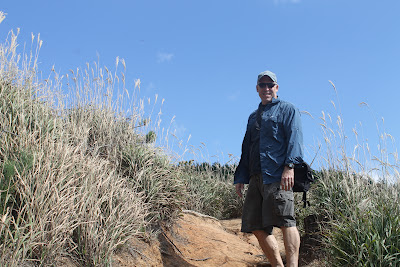 Which led up onto steep forested ridges overlooking the ocean: 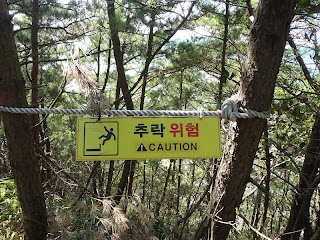 You could see down through the trees to the beaches below: 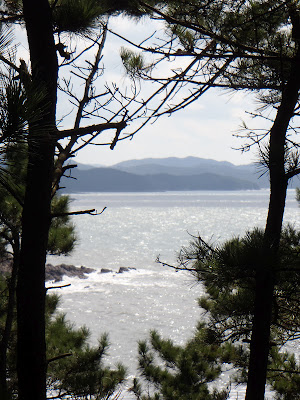 The beaches in this part of Korea are more like those you would find the far northeast of the US or - I imagine - the Northwest:  flanked by evergreen-covered mountains and much rockier than the flat sandy dunes of your typical beach in the southeastern US: 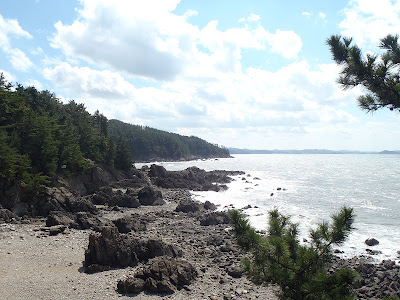 Which didn't stop anyone from enjoying them: 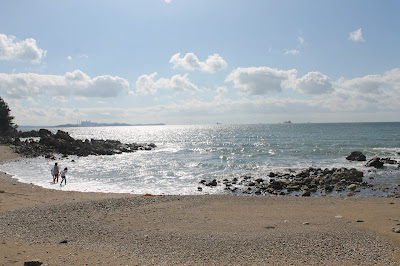 We all hiked the trails and walked the beaches. 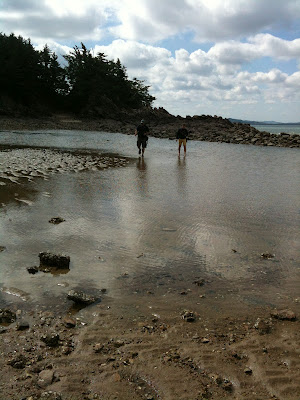 One of the members of our party had brought a kayak, and thoroughly enjoyed using it, although the rest of us were not quite intrepid enough to brave the brisk fall winds. 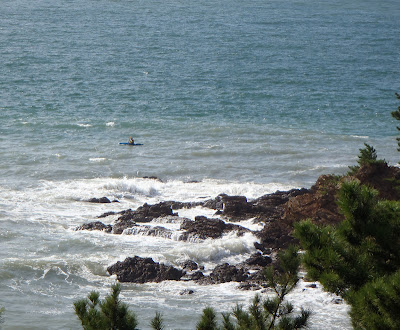 Beachcombing was a popular activity: 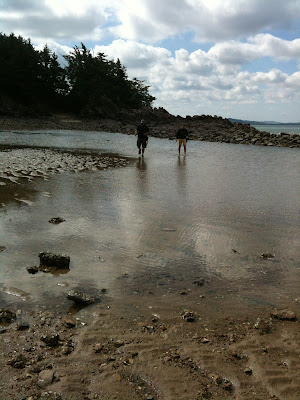 Korea's coastline is dotted with numerous small, rocky islands, only a few of which are inhabited.  There was one right near the pension.  If it hadn't been quite so chilly, I would have loved to try and swim out to explore it: 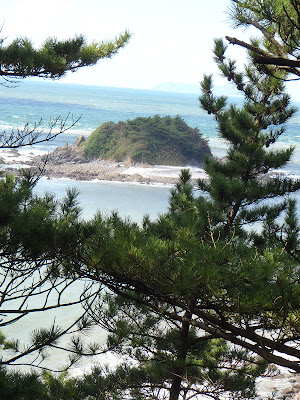 Because we were there during Chuseok, the place was fairly quiet, but there was a small grocery store down the road, and M (who had been there before) said that there were several good restaurants nearby - specializing in seafood, of course.  We had brought our own food, planning group meals in advance and showing up with enough to feed an army. The meals we prepared were quite international in nature, including not only traditional Korean bbq, (compliments of M) -grilled on our deck overlooking the sea, but also Louisiana gumbo, lovingly prepared at home and carefully transported all the way to Taean in a cooler.  I suspect that this was the first and only time that gumbo had been served at Pension Blue Lagoon - but what can I say? My mother-in-law's gumbo has been served pretty much all over the world:  why not at a beach house in Korea? Breakfast included made-to-order omelettes prepared by chef K and her sous chef, B, and yes - we were spoiled.  All of this simply goes to show what can be accomplished in a kitchen with 1 sink, 4 burners, and not much counter space.

The evenings were gorgeous, with delicious sunsets that could be enjoyed from our deck: 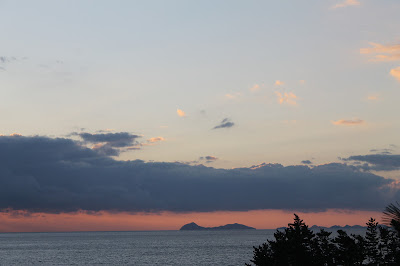 Not to mention the delights that awaited us in the noraebang (private Korean karaoke room), which I mentioned in my last post.  The beauty of the noraebang, as I see it, is that, because it's private, only your friends hear you singing, as opposed to an entire bar full of people as is the case in a karaoke bar.  Miraculously, none of the people who heard me sing have unfriended me on FaceBook, which says a lot either for 1) their level of compassion or 2) the amount of alcohol that was consumed.

As a final note, I absolutely cannot miss giving enormous kudos to Son#2, who was the only person there under the age of 40, yet took the weekend in stride, was a pleasant travel companion, and cheerfully put up with antics of seven adults above and beyond the call of duty.  He also served as our ad hoc photographer, and is responsible for many of the photographs in this post and the last.  If you have ever had a teenager, you will understand why I am even bothering to mention it. 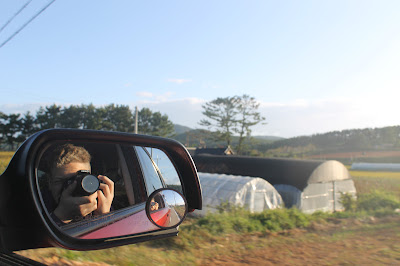 We loved Pension Blue Lagoon and would highly recommend it.  It is about a 3 hour-drive southwest of Seoul in Taean, Chungcheongdo Province.  The website is in Korean, but the telephone number is listed on the site and the property manager speaks English.  You can find the street address on TripAdvisor by searching for 'Pension Bluelagoon (Taean).

Stacy said…
What a fabulous holiday! Those are some of the best, when friends can get together and get away. My favorite part is the communal cooking (of course) and eating as a group.

Kudos indeed to your son. He is a good sport! And an excellent photographer. Those are some seriously beautiful photos.
October 13, 2012 at 8:22 AM

MsCaroline said…
Stacy - It really was wonderful, and even Son#2 liked it enough to suggest that he might like to come back some time. And, yes, we like the cooking and eating, too! My m-i-l spent more than 25 years moving around the world as a military/diplomatic spouse, and is a fabulous cook (something about Louisiana, I guess- you all seem to have it.) As we were packing up to go, I went through the mental list of all the places she'd lived, and figured that that gumbo had probably been eaten in at least 5 countries (if not more) not to mention any number of US states. I'm guessing a lot of your recipes are the same!
October 13, 2012 at 8:49 AM

Stacy said…
Oh, yeah! I have made and served gumbo on six of the seven continents! If only we could get to Antartica, I think gumbo would be very popular in that very cold place!

I'm with you on congratulating that son of yours. My poor lad often has to 'take one for the team' accompanying us to things he'd rather not. This weekend he sat in the audience with his dad and grandma in a church, with lots of old folk, watching me and my singing group sing songs from the shows. He deserves a medal.
October 15, 2012 at 8:09 AM

MsCaroline said…
Trish - I am 100% sure that Rory was extremely proud of you and enjoyed himself tremendously. And, if by some bizarre chance, he did not, I'm sure he would never have let you know. Was this the performance where you did the number from 'Sister Act'? I hope it did end up going well!
October 15, 2012 at 10:47 AM

Holly said…
After reading this post, I am filled with indignation! Of course nobody would object to your singing!!! I know for a fact that you have a beautiful singing voice (having had the pleasure of hearing it and/or singing with you many many times), AND that you were a member of both your high school and college choirs! AND, you were the music director at VBS!

MsCaroline said…
Holly: awww...you are too kind! However, I should point out that pop music has never been my forte' (and that was pretty much all we sang.) I should also point out that I am a LOOOOOW alto and all of the songs were pitched too high for me - bad combination. I will say, though - it was a LOT of fun. If they'd had noraebangs in our young days when I was living in VA, you and I and Cheryl would have probably spent all of our time in one - especially since I probably would have figured out quite quickly that you can actually change keys on the songs (something I learned belatedly.)
Thanks for having my back, my friend! xxoo