This is Halloween. Sorta.


Halloween is once again, upon us, and MsCaroline admits to being something of a slacker this year.  Those who have been following this blog since its inception will notice immediately that the above photo is from last year's Halloween festivities:   MsCaroline admits that, yes, this is last year's Halloween photo.  However, MsCaroline is nothing if not a fan of recycling, and, if the truth be told, she doubts that she and MrL will ever come up with such good costumes again.  Ever.

So enjoy last year's photo.  MsCaroline may just make it an annual thing from now on.  Every year, she'll drag out the Halloween 2011 photo and relive her first Halloween in Seoul, -from the awkward subway ride right down to the eating of roasted silkworm larvae -and shake her head fondly over all her past shenanigans, while her readers go somewhere else.

Since this blog is - in theory at least - about expat life in Seoul, MsCaroline hastens to point out that Koreans do not really celebrate Halloween, although one sees signs of it here and there in the city, especially in the parts of the city where foreigners - especially Americans - are concentrated. One sees decorations, displays, and advertisements with a Halloween theme here and there, especially at US-based establishments like Baskin-Robbins and Dunkin' Donuts (yes, they have them in Seoul, really).  A number of bars and restaurants popular with foreigners decorate for Halloween, and Itaewon - the 'foreigner' neighborhood of Seoul - turns into one big Halloween party on the weekend closest to the actual date.  All the bars and dance clubs turn into one big Halloweeny extravaganza, it would seem, although MsCaroline - being a bit past the dance club part, at least - cannot give you any further details.

This year, Halloween somehow sneaked up on us without notice.  MsC and MrL were at a makgeoli bar restaurant with friends eating a convivial meal (there is no other kind of meal to eat when you have been drinking makgeoli (Korean rice wine) - trust me) when they noticed a larger-than-usual number of zombies and sexy kittens strolling by and realized, belatedly, that, it was indeed, Halloween.

As an aside -MsCaroline is not being judgmental or anything, but she feels that wearing your normal street clothes - in this instance, a minidress and very high heels - and slapping on a headband with some kitten ears on it at the last minute, is a very poor excuse for a costume and shows an astonishing lack of creativity.  But - as she said, she is not being judgmental.

The point is, MsCaroline has nothing much to say about Halloween this year, although she did discuss the finer points of an American Halloween with her students, who expressed skepticism when she explained that many Americans decorate their houses and yards for Halloween.  This forced MsCaroline to collect photos from her generous friends in the US to create a Power Point presentation to share with her students to prove to them she was telling the truth.  She is happy to report that they enjoyed it.  They also enjoyed the fact that she distributed (under the auspices of cultural authenticity) candy that looked like eyeballs and severed fingers, because they are disgusting, and when you are in elementary school, disgusting is a hot commodity.


In the meantime, MsCaroline is trying desperately to enjoy the waning days of Fall as she looks down the barrel of another Seoul winter and into the coming months of bitter cold, snow, wind, rain, and soggy public transport.

No, much too scary a note to close on.

Since MsCaroline is shamelessly recycling anyway, she will go ahead and leave you another recycled image from last year: 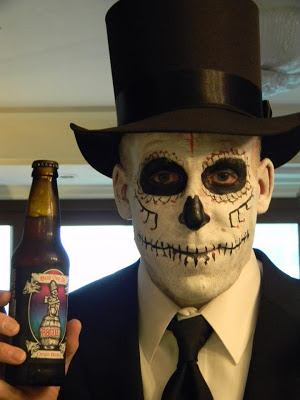 Michelloui | The American Resident said…
Well last year or not, that's some amazing facepaint!! I don't think I have ever dressed up for HAlloween for all the 20+ years I have lived in the UK but they do love a good 'fancy dress party' (even though most people say they don't) so there's other opportunities. My favourite was a James Bond themed party and I went as Blofeld's white cat--I bought white 'fur' fabric and stitched together a mini skirt with tail and bikini top, converted some rabbit ears to cat ears, bought fishnet tights and some white platform boots... ahhh, those were the days when I could get away with that sort of thing! And it was in a private house not on the subway!
October 31, 2012 at 8:29 AM

MsCaroline said…
Michelloui -Thank you - we both agreed we didn't think we could ever top it! Loved the cat idea, though- what a great idea for a costume! I just absolutely love a good costume that's had some thought put into it - hence my scorn for the last minute kitty headband ears. I will say I would never have ridden on the subway in that getup if I had given it some serious thought - we really should have taken a taxi. As it turned out, I think we ended up in about half of Seoul FaceBook posts that night - so many people took our pictures! On the downside, we actually scared some little ones who just weren't used to seeing that sort of thing - I felt awful about that!
October 31, 2012 at 8:46 AM

BavarianSojourn said…
And a very happy Halloween to you MsCaroline... Those costumes are absolutely fantastic. I will admit to a cat being my costume of choice as a teenager though, please don't hate me! Enjoy the rest of the fall in Seoul, and console yourself with the fact that Spring will be here before we know it! :D
October 31, 2012 at 8:52 AM

Trish said…
I didn't see this post last year - I think we were away - so I'm very grateful to you for recycling the photographs. Absolutely brilliant.
November 4, 2012 at 3:54 PM

MsCaroline said…
@Emma- I'm positive that your teenage cat costumes were creative and interesting and I would have loved them!

Barbara said…
We just went through all of our Day of the Dead festivities here in Tucson, my first time! And I know you lived in Arizona at some point, so I am seeing a big Tucson/Mexico influence in the skeleton face paint there. You looked great!

MsCaroline said…
Hi, Barbara, I left a message on your Tucson blog post, but thanks for the props! We both agreed that last year's costumes were winners - but now we're not sure we'll ever come up with anything that good again...although I've been toying with the idea of a Frida Kahlo costume for a while now...just have to find something for MrL to wear!
November 12, 2012 at 1:17 PM