Chuseok 2013 in Cambodia: On to Bayon


Note:  This is the fourth in a series of posts about the Asia Vu family trip to Cambodia.  For previous posts, you can click here,here, or here.

After lunch, there was only one major temple left on the day's roster, and, to be honest, everyone was pretty happy about it.  Make no mistake:  MsCaroline was well aware of her good fortune in being able to experience such an awesome display of bygone architecture, but 5 hours of schlepping through crumbling temples with 95% of humanity in the mud and rain had left her bitter and defeated slightly tired.

So everyone was pretty happy when they pulled up on the road in front of the imposing gates of Angkor Thom.  (As mentioned earlier, Angkor Thom was established as a 'new' capitol city under King Jayavarman VII, and contains several temples of its own.)

Bayon is one of the most well-recognized temples because of the giant heads that one finds all over it, and they are extremely impressive.  The gateway leading into the Angkor Thom complex is, in fact,  your introduction to what will be a series of giant heads. 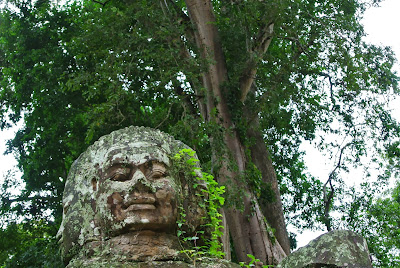 According to the guide, the visages all over Bayon - which were theoretically supposed to be representations of Buddha - bear a striking resemblance to King Jayavarman VII (the ruler who commissioned the temples..see where this is going?) which reminded MsCaroline that kings the world over - be they European or Asian - have quite a bit in common when it comes to getting themselves immortalized through art.


The guide also remarked upon the fact that, while Bayon was originally built as a Buddhist temple, it came under the later rule of both Hindu and other types of Buddhist rulers, who  - instead of tearing the temple down - simply changed the deities' names.  Thus it was that all the statues that had been referred to as 'Buddha' would then, subsequently, be understood to be representing Vishnu and then, later, Buddha again.  The guide pointed out that, in many temples, statues would be destroyed or defaced by later worshipers.  However, it appears that Bayon - due to its sheer massiveness, one supposes - was left more or less alone and the general idea was that everyone had better know to which deity they were praying.


Since Bayon (along with the two previously-visited temples) is one of the most popular sights in Angkor, the Asia Vus were, by now, not surprised in the least to find a sea of umbrellas bobbing ahead of them as they walked into the temple complex. 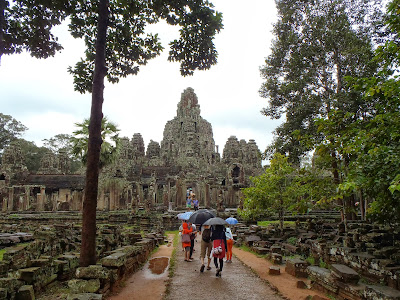 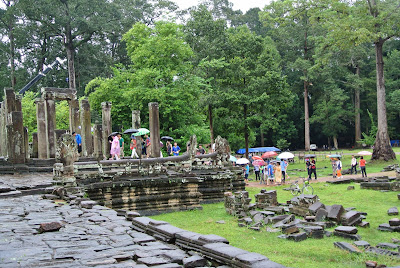 The sheer number of tourists - and their umbrellas - made it a bit challenging to get some of the more iconic shots that it is obligatory for every tourist to take when at Bayon, and there were several times when the Asia Vus had to queue for a bit to get their opportunity.  This was, of course, complicated by the numerous passers-through who had already gotten their pictures and were moving on to the next spot by going through your spot, and so on, as well as the throngs of Chinese tourists who did not really understand the whole queuing concept and had an unnerving tendency to jump in whenever they found a space.

However, MsCaroline and co. are nothing if not intrepid, and they persevered, following their guide doggedly through the ruins and ignoring the crowds and the rain:


Eventually, after a certain amount of persistence, the Asia Vus were able to take what they believed to be very clever shots suggested by their guide and which actually turned out to be suggested by all the guides and taken by most of the tourists:


Eventually, though, the crowds returned to their buses, and the Asia Vus were able to snap a few shots in relative peace before the next busload arrived: 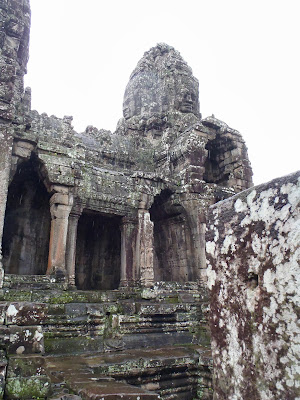 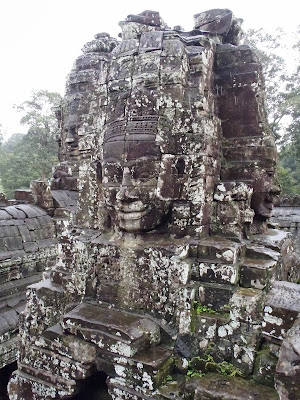 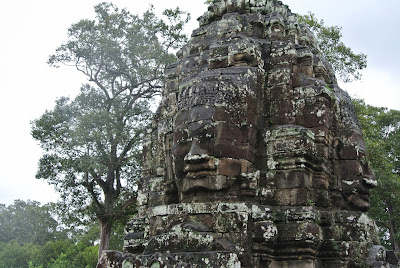 When one is wandering around Bayon, one doesn't think much about what the ruins look like on the outside, but passing the moat on the way out, the hulking ruins looked gloomy and sad, despite the benign countenances of the many faces.  The effect was certainly heightened by the grey weather and the drizzle: 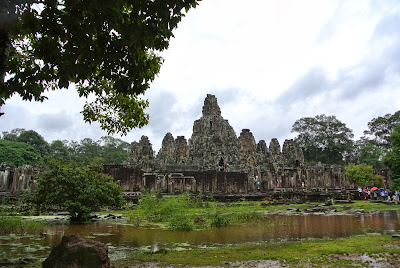 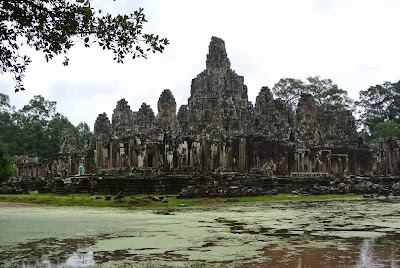 For some reason,although it was far from being either the oldest temple or the one in worst condition, Bayon struck MsCaroline as being the saddest and most forlorn - looking - giant smiling heads notwithstanding.
Email Post

Trish said…
I'm being educated and amused in equal measure by this series of posts. Love the nose rubbing photo and, for some reason, am giggling to myself reading the caption under the photo of the Guide.
October 11, 2013 at 8:18 PM

BavarianSojourn said…
I certainly wouldn't want to be wandering about there by myself at night, but there's something so lovely about those smiling faces! :)
October 11, 2013 at 8:21 PM

Stacy said…
You are making me want to go back and flip through my own photos. Pretty sure we saw all of that but just want to double check. I have at least one photo of one of the temples with a reflective pool that is fabulous. Thanks for bringing back the good memories!
October 12, 2013 at 6:44 PM

Stacy said…
You are making me want to go back and flip through my own photos. Pretty sure we saw all of that but just want to double check. I have at least one photo of one of the temples with a reflective pool that is fabulous. Thanks for bringing back the good memories!
October 12, 2013 at 6:44 PM