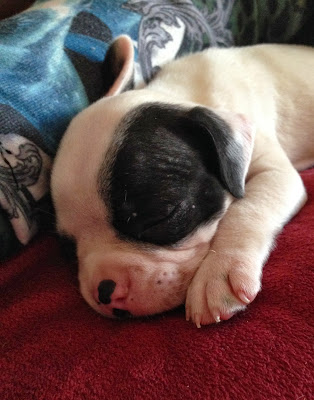 For those of you who might have been concerned that my unusually-long silence was a direct result of revelations about my father's occupation in my most recent post, let me set your mind at rest.  I have not been spirited away to an unknown location by suspicious-looking characters in dark suits due to compromising national security or revealing state secrets - yet (although, one presumes that, if this were going to happen, it would have happened by now.)

Anyway, the point is, all is well at chez Asia Vu.

It is just that, 10 days ago, we added this to our household: 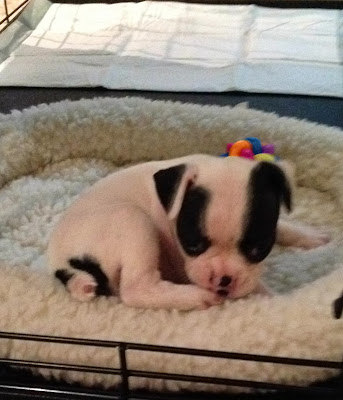 And, as those of you who have ever raised a puppy will understand, I've been a bit busy.

Long-time readers already know that we are a very doggy family, and that we already have one canine family member - the third in a series - the Yellow Dog, who has been living a life of coddled luxury far nicer than he ever enjoyed with us with my cousin in Canada while we are overseas.  The reason for this is that the Yellow Dog is quite large, and we knew it would be nearly impossible for us to find an apartment with enough space (not to mention a garden) for him to live comfortably with us in Seoul, where grass is at a premium and many (most?) apartments do not allow larger pets.

When we moved here almost 2.5 years ago, we planned to be moving back to the US in June 2013, which - obviously - did not happen.  After 2 miserably dogless years, we moved in June to a new apartment that - hallelujah! - allowed small pets, and began searching for an addition to the family.  Requirements were:  something small that would fit within the guidelines and be happy living in an apartment with minimal access to an outdoors.

We decided that, although we are most decidedly dog people, we desperately needed a furry companion, and that the most sensible thing to do would be to get a cat, which would provide the animal companionship we so desperately missed but would be more suited to our present urban lifestyle.

MrL and I went to the animal shelter and interviewed several likely feline prospects, but neither of us felt the love, so to speak.

We decided to go back on the weekend with #2 in tow and look again.

Which is, of course, why we came home with a dog.

Having only ever had large dogs (38 kg/85 lbs and larger) we are still learning how to deal with a dog roughly the size of a guinea pig ( and unlikely to get much bigger than a hedgehog,) which has presented certain challenges.

We are also remembering what it is like to raise a puppy, which also presents certain challenges, mostly for me, the primary caregiver person who is with her the majority of the time.  Broken sleep,rushing back from outings to let the dog out, lots of chewing and (in this case) trying to keep her from getting stuck under the furniture have been the order of the day for at least 10 days now.

Just like with an infant, I look forward to her naps.

On the plus side, my floors have never been so clean, due to frequent post-accident cleanup (she seems to be getting the idea, but very slowly.)

The man we got her from indicated she was a French bulldog, but we are fairly certain she is a mix of several things (mostly tiny things, since Seoulites, with their space limitations, love small dogs,) including Boston Terrier.

Whatever she is, she sports a wrinkly muzzle, flat nose, slightly protruding eyes, and ears that will stand erect on her head sometime in the next month or so. 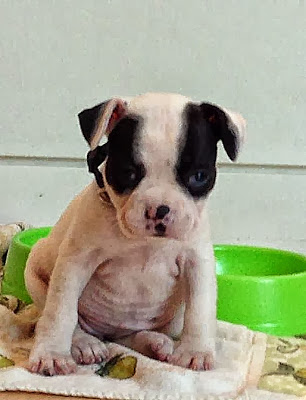 In a nod to the supposed French connection, we stuck with the theme we started with the Yellow Dog, who is named after one of our favorite beers, when we named her:

We're working on broken sleep, spending a lot of time puppy-proofing and moving deadly things out of the way, and generally focusing on the task of helping her to grow up into a good canine citizen. There are chew toys, treats, 'puppy pads,' a carrier, a crate, a miniscule harness and leash, and various other accoutrements of the urban canine scattered all over our house, and things are more than a bit chaotic.

There's a dog in the house again, and all's right with the world.

Trish said…
You don't appreciate how tiny she is until the final photo. I'm not a doggie person I have to admit, but I can see why this little bundle has stolen your heart.
October 21, 2013 at 7:26 AM

MsCaroline said…
Trish - yes, she is quite tiny! We are still a bit baffled, never having experienced a dog of her size...but we're learning!

Emma - You probably would not be quite so jealous if you were the one on cleanup and babysitting duty - she's quite energetic!

Heather Rose-Chase said…
Squeeeeeeeaaaaaal! She is adorable and sweet and we know oh so well the "joy" of potty training! I was raised only with big dogs, Rottweilers and such, and absolutely love them. But we have all come around and fallen head over heels for our tiny girl who is very Asian-apartment sized as well. Having a fluffy friend makes all the difference in the expat world. Congrats and may Merlot quickly come around to knowing the appropriate place to do her business!
October 22, 2013 at 7:03 AM

MsCaroline said…
Heather - Yep, switching from 'big dog' to 'little dog' has been a real eye-opener! I still can't get over the food - I have never served a tablespoon of food to a dog in my life, and I still feel that it's somehow wrong. I'm steeling myself for the long run with Merlot and her potty issues - so far, she gets it right about 50% of the time, and none of the sites are very encouraging about the amount of time it takes to potty train small dogs. Fortunately for her, she's adorable. In case you don't read this comment, I'll post this on your page as well, but thought of you this morning while listening to a 'Stuff You Missed in History Class' podcast - topic: Disney's Haunted Mansion.
October 22, 2013 at 10:12 AM

nappy valley girl said…
A little bonsai dog! Seems quite appropriate for Korean living. I hope she brings much happiness.
October 22, 2013 at 4:41 PM

Stacy said…
I am so thrilled for you! We, as you might have suspected from the occasional appearances of my furry helper, are also dog people. We have had rare months in our 27-year marriage without a dog and it's been tough. Now what you have acquired is what we call a "yip" but I am sure Merlot will prove to be a worthy addition to the family. We raise a glass of the appropriate red to her and to your good health!
October 22, 2013 at 6:53 PM

Nance said…
Who could resist that face? Good heavens. With her coloring, it looks like she spent a lot less time on the skins than merlot does, however. Probably she's more of a chablis. LOL. Have fun with your dear, sweet pet. She's just "crushably" cute.
October 24, 2013 at 1:43 PM

MsCaroline said…
NVG- Yes, she's just about the right size for an apartment. Cleaning up after her is far less traumatic than it was with the 3 retrievers.

Stacy - yes, 2.3 dogless years were enough. We have never been fans of little yipe-yipes (our version of 'yip' I guess) but we figure a teensy dog is far better than no dog! My German colleagues refer to the very small ones as 'Fußhupe' -literally, 'foot horn' - eg, they make noise when you step on them!

Nance - yes, indeed, she could have been a Pinot Grigio if we're going purely on coloring. Our large main dog (to quote Dave Barry) is named Shiner (a favorite Texas beer of MrL) so we felt it was necessary to name her something that we also drank regularly. We have had a few puppies over the years, but, yes, I think she is without a doubt the cutest, smooshable one we've had yet.

Stacy said…
What a perfect name: Foot horn! I may have to change from yip to that. We also call them "kicking dogs" since they are always underfoot so foot horn is the next logical step. :) Love it.