Chuseok 2013 in Cambodia: The Temples of Angkor

So, dear readers, at long last we come to the reason for MsCaroline's journey to Cambodia:  Angkor Wat.  Or, more correctly, the temples of Angkor.  If you have slogged patiently through all of MsCaroline's nattering about shopping, eating, sleeping, crocodiles, and MrL's delusions of grandeur harmless maharaja game all because you just want to see the photos, then the time is at hand and your patience shall be rewarded - at last.


But first, a few notes about Angkor Wat (Ha! Killing you, isn't it?)

Angkor vs. Angkor Wat:  While most of us can agree that Angkor Wat is pretty amazing, few of us (count MsC among them until last week) know much else about it, which seems sort of odd when so many people (like MsCaroline) have it on their bucket list.  What MsCaroline knew - that you probably do, too - is that Angkor Wat (the structure pictured above) is a really cool old enormous temple finished sometime in the 12th century in Cambodia, and (maybe) that it's a UNESCO World Heritage Site.  Given that there are UNESCO World Heritage Sites all over the world, many of them older than Angkor Wat, and that MsC's knowledge about most of them is minimal, MsCaroline is not sure why she was initially so keen to visit Angkor Wat as opposed to, say, the Monastery of Geghard (which, is, as we all know,a UNESCO site in Armenia) - because her level of knowledge about both of them was roughly the same:  nonexistent.  In any case, once she got to Angkor, she realized that - no matter how fabulous that Armenian monastery might be, it would probably be impossible to come up with something more awe-inspiring than Angkor Wat - even in the rain.


The point is, what MsC knew about Angkor Wat was, at best, minimal.  However, now that she has been dragged through more temples than she can remember educated, she is ready and willing to pass on her newly-gained information to you, loyal readers.  She will do you the favor, though, of providing you with the Cliff's Notes highly-condensed version in a few succinct bullet points (MsC loves bullet points.)


Angkor Wat:  The biggest and the best.  Less charming (one imagines) in the rain, but verdantly green and (according to our guide) not really very crowded.  The temple itself is an enormous, sprawling complex surrounded by a moat and outer walls, sort of like a medieval city. Within the walls are countless towers, turrets, hallways, niches, nooks, and crannies.  Many parts of the temple are under active restoration.

Ta Prohm:  Having seen Angkor Wat, the next stop was Ta Prohm, known to most of the world as the 'Tomb Raider Temple' made famous by the Angelina Jolie movie.  Unlike Angkor, Ta Prohm is overgrown with trees, vines, and foliage.  Huge blocks of stone have been pushed and tumbled over the years; giant tree roots run for meters along walls.  One sees sky and trees through gaping holes where walls have crumbled, and everything is covered with a patina of moss and lichen.  It is extremely Indiana Jones-ish and undoubtedly the 2nd most famous temple in Angkor.  It is actually located in part of the Angkor park known as Angkor Thom, which was an alternate capitol built by King Jaravarman IV when he came to power.

The Asia Vu's guide took them in, instead of the more commonly used front entrance, via the back way, down a jungle path:


Since they had come in through the back of the temple complex with their guide, the Asia Vus had a few peaceful moments exploring in blissful solitude until the next swarm of tourists appeared. 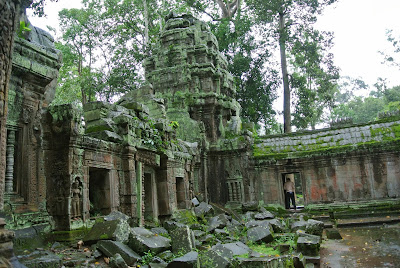 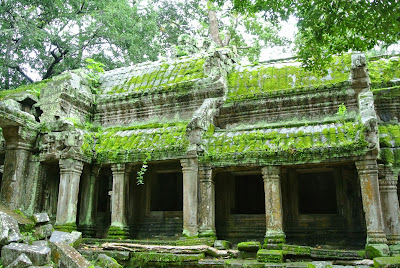 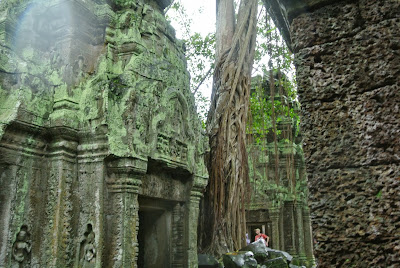 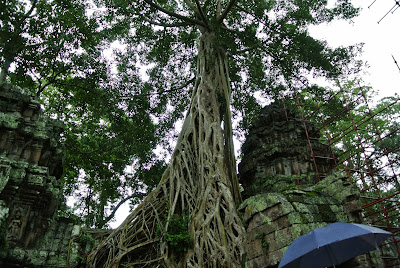 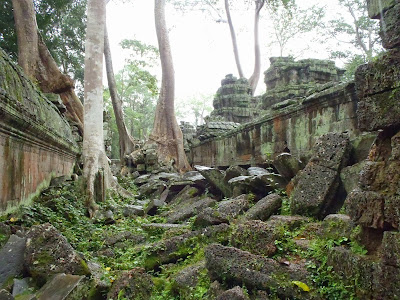 While it is true that the temple was not particularly crowded in the rain, it was also true that one needed more space than usual in order to maneuver around everyone else's umbrellas. 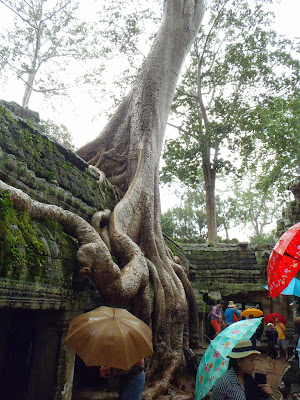 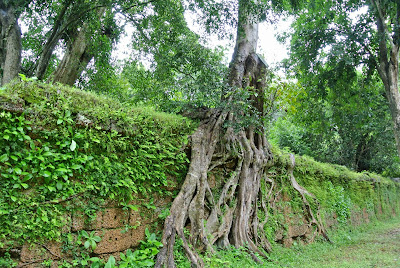 After slogging through the mud back to the car, MsCaroline and co. agreed that a midday break was in order.  Their guide took them to a nearby restaurant which served excellent amok, as well as several more exotic dishes.

Once refreshed, they were ready to face enjoy the last temple of the day:  Bayon.

Trish said…
I think I've just deleted my comment so will start again!

Thanks for telling me all about Angkor Wat, my knowledge was minimal too.
I'm amazed at the tree roots - never seen anything like that before.
How come your son appears to be flying across the rubble? Impressive!
You've also brought back bad memories of trying to get past the levels in the very old Playstation Tomb Raider game. That was my first and last foray into console games and I still shudder when I think about the time I wasted all those years ago..
October 2, 2013 at 9:52 AM

MsCaroline said…
Trish - Isn't it strange that we all know we want to go there, but don't know anything about it? It is an incredibly imposing structure (especially when you think it was all done in a jungle without any heavy machinery) regardless, but you'd think there would be more general knowledge floating around. If you click into the photo, you can see that #2 is just perched on some rubble - not flying, although it would have been a useful skill in that temple! Lucky me, I never played 'Tomb Raider' so I had no bad memories to remove. I also managed to doze through 2 showings of the DVD in our hotel room. I think I was just destined to see Ta Prohm without any preconceived notions... ; )
October 2, 2013 at 10:20 AM

broken biro said…
I missed your earlier 'natterings' but enjoyed revisiting the temples... I was there a few years ago and gob-smacked how many of them the are... I especially loved the smaller ones being consumed by the trees!
October 3, 2013 at 9:43 PM