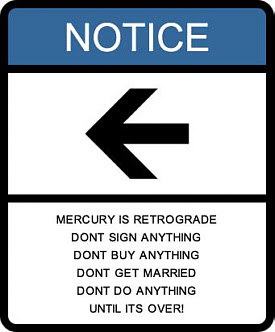 No, I'm not talking about the Season of shopping Goodwill to Men;  I am, of course, referring to Mercury Retrograde, which took us a bit by surprise this time.  I suppose, having managed to survive the last round, we were so relieved to have it all over and done with that we didn't bother to look ahead, which meant that, when things started going agley here, it took us a few days to realize what was going on.
Ironically -or cruelly, your choice - Mercury jumped its course on our Thanksgiving Day this year, which means that it hit at a time when most Americans are preoccupied with food and entertaining as opposed to maintaining constant vigilance - really the only possible hope for defense.  When not one, but two (or maybe we were already up to three) long-distance burocratic snafus had taken place within the course of just a day or so, MrLogical jokingly asked me if Mercury was retrograde.  Much to our surprise (but with a certain bitter sense of vindication) we discovered that Mercury was, indeed, on its way into another one of its charming retrograde periods, although, at the time, we were still only in the 'shadow' of Mercury retrograde, which the internet astrologers assured us was not nearly as serious as Mercury being retrograde itself,  giving us something to look forward to with the same level of grim anguish with which one anticipates, say, a barium enema or death by lethal injection.
As of this writing, Mercury has been technically doing its thing for only 3 full days, but the mayhem began in earnest about a week ago, resulting in a lot of bitter laughter, black humor, and carbohydrate consumption by yours truly.  To those of you who are saying, "Pshaw! This is the 21st century, not the Middle Ages! This is an era ruled by technology and logic!" I say, you are probably right, but having Mercury to blame things on seems somehow preferable to admitting that I'm an idiot I have been a bit disorganized and distracted lately.  On the list of Things To Blame on Mercury Retrograde So Far: 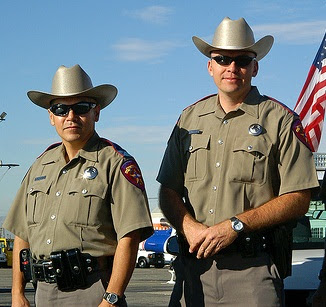 If it sounds like I'm complaining, you're damn right I'm complaining  I sincerely apologize.  As is always the case with Mercury Retrograde, none of the incidents I've been whining about are life-threatening, disastrous, or dangerous.  They are, as is usually the case with Mercury, simply annoying and inconvenient.
Besides my mood has been significantly lighter since Son#2 informed me the other night that, when he reaches 18, he is planning to change his name to " Shadowfax Steele."
Has a nice ring, doesn't it?
Email Post
Labels: expat life mercury retrograde Thanksgiving

Karen said…
I had a good chuckle to end my Thanksgiving weekend, Carolyne. I'm just about off to bed after an unusually brutal bout of cramps that drove me to my ibuprofen bottle and even got me to ask hubby to fetch me the heating pad. Down to just normal, mild cramps now, so think I will go to bed.
Please...I feel in control right now...schoolwork is done, some online Christmas shopping is done, Christmas tree is purchased and standing in the living room awaiting decoration and all is well. Don't let the retrograde strike here! Had a good laugh at your "brief but thorough meltdown" wish I could have seen that, as a fly on the wall of course. Your poor menfolk...tiptoeing around in what sounds like mortal terror!
Off to bed for me, feeling much more human and a bit grateful for such a wonderful Thanksgiving holiday. Looking forward to that week off at Christmas already!
Love,
Karen
November 28, 2011 at 3:31 AM

MsCaroline said…
Karen - sorry you had to turn to Ibuprofen (surely, at this age, it should be a walk in the park, and yet, for so many of us, it seems to be getting worse!) but glad it worked. I have my tree up and many (but not all) gifts purchased, although they still need to be wrapped and mailed (groan). I have a feeling you would have been a lot more sympathetic about my meltdown - which, much to my everlasting embarrassment, actually bordered on tears - than the menfolk were. I suspect it was a combination of things with tiny stove/big dish/hideous potato mess being the final straw. Looking forward to our vacation myself, although I suspect I'll be wildly busy between now and then. Trying to keep my head down and sense of humor intact!
November 28, 2011 at 3:42 AM

Barbara said…
My sympathy on the lost Kindle! I dropped mine on a tile floor and broke the screen while in Tanzania. I cried! Amazon replaced it free because they said it was covered under warranty. But by the time I paid for the phone call, the import tax, and shipping to send in the broken one, I'd paid about half the price of the new "free" one. But I was lost without it! And then, back in the U.S I left it in a restaurant and drove on to the next town and didn't miss it for several hours. But when I called the restaurant, the manager had set it aside for me and was waiting for a call, so I got it back. I try to be so careful with it now because I was so traumatized when forced to do without! If you like to read and you like to travel, you gotta have a Kindle!
November 28, 2011 at 5:22 AM

Wilma said…
Carolyne, what on earth were you taking sweet potato casserole for? You should have been taking pate and the turkey pate knives! LOL (Sorry couldn't resist.) Seriously, sorry to hear about all the craziness that has been going on in your world. Hopefully it will calm down soon.
November 28, 2011 at 5:23 AM

MsCaroline said…
Barbara - I'm so happy that I'm not the only adult who cried at the loss of a Kindle! Thanks for restoring some of my dignity. I have another one heading this way, although - sadly -not for free. The warranty does not seem to cover 'stupid' or 'forgetful'...unfortunate.

Barbara said…
OK, I just have to say that you are in sad shape if you have to rely on me to maintain your dignity! I provide a very low threshold of dignity!
November 28, 2011 at 11:46 PM

Trish said…
Like Karen, that perfect phrase "brief but thorough meltdown" made me laugh a lot. Sums it all up brilliantly.
I'd be tempted to just hide under the duvet for a while until this Mercury thingy takes a hike.
November 29, 2011 at 9:00 AM