Do You Want to Hear What I Hear? 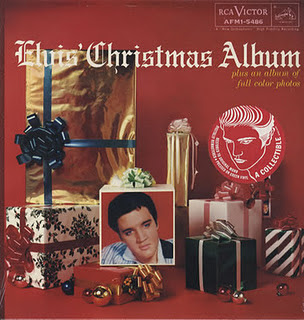 As this is our first Christmas in Seoul, I've been thinking a lot about family traditions, especially since ours have - by necessity - changed a bit this year.  Having two teenage boys in the house means that most of the traditions that are still being observed these days rotate around food:  there is a certain amount of satisfaction in watching two otherwise-sophisticated young men scramble in the felt pockets of their childhood Advent calendar for a piece of chocolate, even if neither of them still believes in Santa.  They have both anxiously inquired if I'm planning on making our traditional make-ahead-pull-apart sticky buns on Christmas morning(yes), and have also expressed relief that we will be eating a traditional Christmas dinner (they were both a bit taken aback because I didn't cook a Thanksgiving dinner this year.)  The tree, of course, is up and decorated, and a few bits and pieces from home add a little Christmas touch, although the majority of our Christmas swag is languishing in a storage unit somewhere back home.  However, more important than all of those things has got to be the music of the season, which - safely ensconced in MrL's old iPod touch - has provided the soundtrack for yet another Asia Vu Christmas season, and I hope, when Sons#1 and #2 look back on their childhood, they will think of these songs with a bit of nostalgia, although I have no doubt that there are some that make them want to gouge their own eyes out they will never want to hear again.

Both of my parents loved Christmas music; each year, after Thanksgiving, my parents would start playing  Christmas music around the house as they decorated, cooked, and prepared for the coming holiday.  Regardless of where we were living, those same records (yes, actual vinyl records, children:  they're like big black CDs - if you remember CDs) provided the background music for the whole holiday season.  They were one of the few constants running through my very transient childhood.

The standards back then, of course, were Bing Crosby, Andy Williams, Perry Como, and, of course, Elvis, along with a number of now-forgotten choirs and orchestras featuring the great classics. Even today, it takes only a few measures of Bing Crosby's 'Adeste Fidelis' or Elvis' 'Blue Christmas' to put me immediately into the Christmas mood.  Needless to say, when MrL and I got married, it went without saying that we would establish a collection of Christmas music of our own, and that it would - undoubtedly - include a few more artists than Bing and Elvis.

Our first step in this direction was on our first married Christmas, in the somewhat impulsive purchase of Ottmar Liebert's flamenco-style Christmas album, Poets and Angels:  Music 4 the Holidays, which we'd read a review of in some magazine or other.  The fact that neither of us particularly cared for flamenco music under ordinary conditions did not dissuade us from adding it to our fledgling newlywed Christmas music collection, and we confidently popped it into the CD player, sat down in front of the fireplace with a glass of wine, and prepared to prove ourselves open-minded.  Unfortunately, while Ottmar is a talented musician, the album did nothing for us.  Actually, if the truth must be told, we loathed it.  Only the fact that we had spent $24 of our hard-earned money (keep in mind that back then, $24 would have filled my gas tank) on a non-returnable item stiffened our spines with the resolve to get our money's worth out of it, and -against our best instincts - the sultry stylings of flamenco guitar provided the background for that first married Christmas.  Human nature being what it is, by the time December rolled around again and I pulled the Christmas things out of their storage boxes, Ottmar' seemed like an old friend. A weird, eccentric, flamenco guitar-playing old friend, but still - a friend.  After that, we made it a point to add something new, different, or fun to the collection each year, and - 20 years later - we have a wonderfully weird eclectic selection, ranging from classical renditions of The Messiah to A Very Brady Christmas (which is every bit as good as you would expect.)

A word of warning:  if you are not a Christmas-music person, or (even more likely) if you are reading this in a hurry, this won't be much of a post for you.  I put it together with enormous pleasure over the past few evenings with a few glasses of wine, collaborating frequently with MrLogical as to the best selections to include.  Ideally, you should have a mug of something hot and a few uninterrupted moments in order to obtain the maximum amount of pleasure from this post. If you are in the dentist's waiting room and reading this on your phone, I recommend earbuds.  If you are a holiday music aficionado, you may already recognize all of these artists and songs, in which case, sit back and enjoy.  But, if - like us - you are always searching for a new and interesting rendition of an old favorite, or a new song to add to the seasonal repertoire, I hope you'll enjoy this very select sampling of some of our favorite sounds of the season, and - just maybe - find your own Ottmar Liebert.
(Note:  I am in no way a professional music critic, so don't expect any insightful descriptions.  I was hard-pressed to come up with anything more than 'This is a really good song." You have been warned.)


Let's start with a relatively-well-known indie group, the Barenaked Ladies, from their album, 'Barenaked for the Holidays', and their rendition of  O, Hannukah, which is wonderfully fun and upbeat, and perfect for the season of good cheer:


Right before we moved to Arizona, we bought this cowboy-style CD by Riders in the Sky, "Christmas the Cowboy Way" which - as it turned out - has nothing to do with life in the modern Southwest, but which is alternately hilarious and tender and always good.  Their version of Let it Snow is musical proof positive of their theory that all Christmas songs are based on 'Let it Snow.'


From the early days when our boys were small and 'kid music' featured predominantly, a favorite that has stayed around has been Veggie Tales, which are a series of videos, songs, and movies about animated talking vegetables..you know, if you haven't seen them, they're really hard to explain.  I will say they are some of the only Christian-themed videos I have ever seen that are actually interesting and entertaining for adults as well as children.  This version of 'While by my Sheep' sung by Jr. Asparagus(yes, he's an asparagus spear) (and his sheep) is a family favorite  from the movie, 'The Toy That Saved Christmas.'  It starts at 4.54.


In the mood for some Christmas folksy banjo playing? Leon Redbone to the rescue with Christmas Island:


If you've been lacking a certain element of retro-style 1940s swing music in your holiday collection, you must try some Squirrel Nut Zippers from the album, 'Christmas Caravan"

There's nothing to get you into the Christmas party mood like some good celtic music.  The pealing bells at the beginning of this piece just shout 'Christmas' at me:  The Chieftains, The Bells of Dublin/Christmas Eve from the album "The Bells of Dublin."

And whose holiday could be complete- especially we children of the 60s,70s and 80s - without the clear, rich tenor of James Taylor? (Have Yourself a Merry Little Christmas, from 'James Taylor at Christmas.')

Although I really don't listen to anything else by the Trans-Siberian Orchestra, I fell in love with this arrangement of Pachelbel's Canon in D with lyrics sung by a children's choir entitled  A Christmas Canon:


And this last selection, which is one of my favorites by a group of three sisters called 'The Roches'.  Their music is quirky, provocative, funny, and thoughtful.  What appeals to me is the incredibly rich way their voices blend in their close harmonies.  This is Star of Wonder from their album, 'We Three Kings.'


If you've persevered all the way to the end, my hat's off to you.  I hope you've enjoyed this little musical interlude, and if you have any recommendations to share, by all means, leave them in the comments section! Oh, and before I forget:  here's Ottmar.  Enjoy!

Karen said…
I haven't listened to the tunes yet...watching sacred Steelers football (and the lights popping on and off at Candlestick Park) with hubby so don't dare disturb the "ambience." I will admit, though, that I am kind of cranky about my Christmas music, preferring the old standbys and mostly the religious, hymn-y ones at that. Little Drummer Boy, Do You Hear What I Hear, Hark the Herald Angels Sing, Silent Night, God Rest ye Merry Gentlemen, O Little Town of Bethlehem, Away in a Manger...well, you get the idea. Usually prefer the traditional versions, too. I will listen to yours, though...probably not until after Christmas, though. Tired now...off to bed!
December 20, 2011 at 3:21 AM

MsCaroline said…
Karen - God forbid you disturb the Steelers' ambiance! ; ) I'm with you on the old traditional hymns - I would say 85% of our music is comprised of the standards. I just enjoy hearing them sung or arranged differently...I probably have 30 different versions of 'In the Bleak Midwinter' ' Silent Night' 'Good King Wenceslas' and 'Ave Maria' and countless other classics, too. Part of the fun is that I always know the words!
December 20, 2011 at 4:33 AM

Marion said…
Hello to all y'all! (still chuckle at Spanish teacher's [in Texas] use of this as the third person plural). Wishing you a very merry and very happy Christmas and New Year. Bare Naked Ladies do Chanukah music! I listened to a few seconds of both that and the flamenco installment (I felt the need to at least sample!). I'm kind of musicked out after going to all of child 2's Nutcracker on Ice rehearsals. The rink is at the mall so we were pummeled with both Nutcracker and mall christmas music simultaneously. I think she still has a headache. Happy and Healthy 2012 and beyond.
December 20, 2011 at 4:45 PM

MsCaroline said…
Marion - learn something new every day, right? I bet you are just about Muzak-ed out by now...one of the bonuses of being in Seoul is it's not quite so in your face everywhere you go, although I've heard Christmas music a few times - especially in US franchises like Dunkin Donuts and Starbucks. You probably heard Ottmar many times at our house between Nov- and Jan but never realized it. I always feel I should have a pair of castanets when his music comes on...are you all (eg 'ya'll) skiing this year, or staying put? Wonderful holidays and happy 2012 to you. Can't wait to hear about culinary school!
December 20, 2011 at 11:15 PM