As I said in an earlier post, I may be in Thailand at the moment, enjoying the sunny days, tropical temperatures, and sipping cocktails on the balcony with MrLogical.  It is equally possible that I might also be shivering in our apartment in Seoul, suffering even more keenly from the snow, ice, and sub-arctic wind gusts after almost two weeks in the steaming tropics.  In either case, I'm not ready to give you a blow-by-blow of my trip, but I will say that the Asia Vu family did enjoy at least a few days in Bangkok, where MrL and I had the opportunity to re-visit some old haunts,  drag the children to  share some cultural experiences with the boys,  and do some generic touristy stuff, some of which has changed very little since I lived there in the late 60s and early 70s.  Since the whole idea of this blog sprang from the idea that MrL and I were returning to Asia to re-live at least some of our childhood experiences, I thought it might be nice to share a few of those 're-lived' moments with you especially since posting photos takes so much less energy than writing an actual post.  Enjoy! 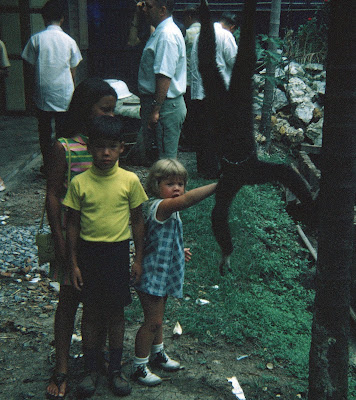 MsCaroline and baby monkey, Kanchanaburi (outside of Bangkok) 2011: 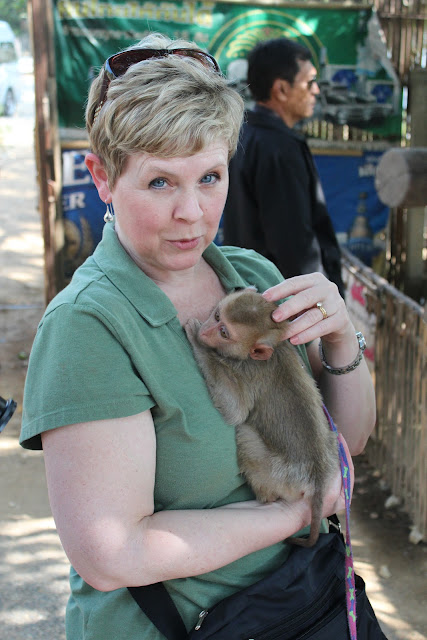 Visiting the Grand Palace in Bangkok:

MsCaroline, posing nicely at the foot of one of the guardian demons at the Grand Palace, ca 1970: 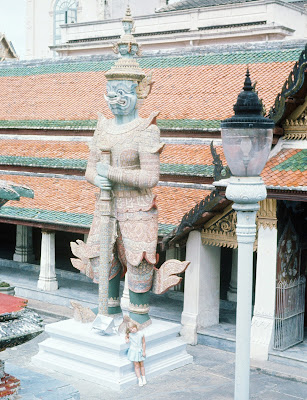 MsCaroline, fed up with the Palace, Demons, posing, and sightseeing in general, ca 1970: 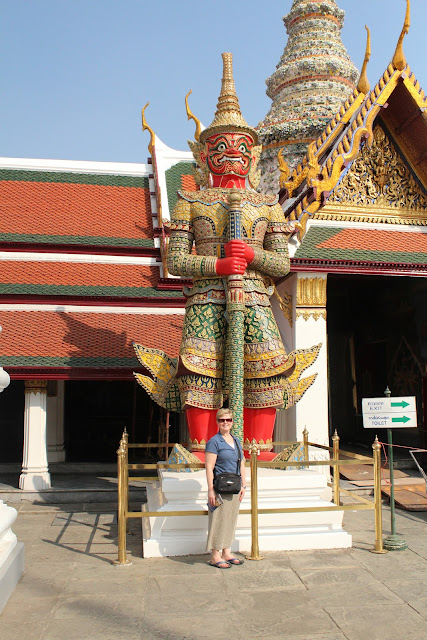 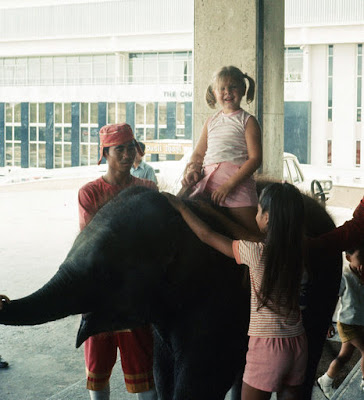 Elephant trek, Kanchanaburi, MsCaroline & MrLogical, 2011 ((note:  I had a certain amount of reluctance about doing the elephant trek, having read so much about the abuse of elephants in Thailand, and I have to say, I would rather watch them than ride them;  I deluded comforted myself with the thought that the elephants at this small and fairly remote kraal seemed well-cared for, didn't appear to be overworked, and were treated humanely by the mahouts.  That being said, I probably wouldn't do it again.) 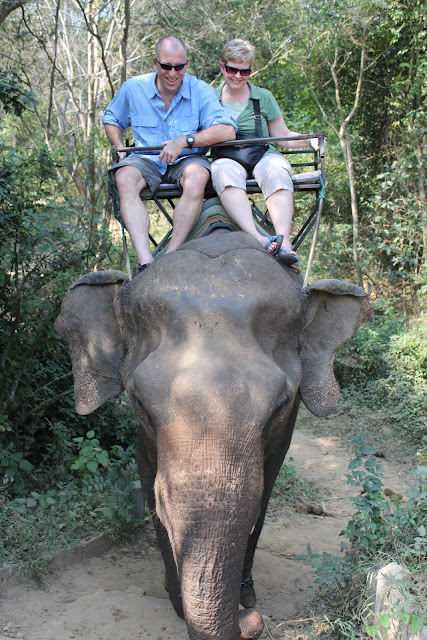 Wilma said…
I like the irritated young MsCaroline picture. So cute! :) It must be kind of like visiting old friends to see these sights again. You are so blessed! Happy New Year to you and yours!
December 31, 2011 at 9:11 PM

Circles in the Sand said…
Wonderful photos! Thank you for sharing .... I've got similar pics of DH in Thailand when he was little, and also when we were both there in 1990 on holiday - you've inspired me to book a trip to Thailand so I can get the 'now' pics too! Hope you're having/had a fantastic time! Happy new year!
January 1, 2012 at 6:27 PM

MsCaroline said…
Emma- thanks, and same to you!
Wilma- it has definitely been a walk down memory lane! Happy New Year to you and yours as welll!
Circles- I highly recommend- we've had a lovely time-pm coming, met someone who thinks she knows you...small world, eh?
January 2, 2012 at 12:40 AM

Karen said…
Just shared your blog with Neil...he loves that kind of thing. He loved it...we both enjoyed cranky little Ms. Caroline. Neil did something similar in NYC this October, recreating pictures taken of his Mom many years ago, using me as a model and also some of the kids. One of these days I will send the photos to you...maybe even later on tonight if I get motivated. For now, we are off to coordinate date books for the new year....Back to reality soon! Happy New Year to the Ogden clan...soon you will be off on your bittersweet US errand. Hope all goes well!
January 2, 2012 at 2:17 AM

Trish said…
Just loved looking at these photos. I didn't even spot your little face in the first pic. Very clever idea Ms C which I think a few of us may have to borrow...! X
January 2, 2012 at 8:35 PM

Elizabeth Musgrave said…
I love the faintly mutinous look on the face of little Miss C. I am not sure at all about elephant riding. Presumably it is better than other things one might do with elephants? How does it compare with horse riding? Is it all to do with the relationship between carer and animal and the quality of care? We have a journalist here called Liz Jones who drives me mad in many ways. She keeps horses but does not ride them because she sees it as "oppression". I sort of understand where she is coming from. I sort of think she's nuts.
January 4, 2012 at 10:53 PM

MsCaroline said…
Karen - looking forward to the photos and glad Neil liked it. Glad I did not have to contend with a cranky kid myself!

Trish - I think most of us can relate to cranky MsC...I hope to see lots of 'then and now' posts...so enjoyed doing my own!

Elizabeth - I don't think it bothered the elephant at all - in fact, I think she enjoyed being loose from her chain; what I've read is that many of the establishments are abusive to the elephants or don't care for them properly (overwork, not enough food, no shade, no medical care, etc.)and the idea is not to support any enterprises that treat their animals badly. I found the elephant ride to be uncomfortable in a jolting, jarring way. I don't know if Hannibal actually rode on the things while crossing the Alps, but I wouldn't have lasted for one day myself. It was a life experience, but not one I would care to repeat!
January 5, 2012 at 1:14 AM

nappy valley girl said…
Love the then and now pics - what a great idea. And your little 1970s clothes are SO like what I remember wearing as a child. You don't look too sure about that baby monkey though....
January 5, 2012 at 7:02 PM

MsCaroline said…
BB: Monkeys seem to stay naturally-young looking; must be all that hair on their faces....; )

NVG: The clothes are so much fun to look at! Will have to do a whole post about my mom's clothes sometime - they're all terribly chic! As far as the monkey goes - I was deeply in love and would have gladly spent the whole day holding that little baby monkey...he cried and climbed up on my head to get away from his handlers when I had to leave! That facial expression in the photo was my 'aw, come on, MrL, can't we take the baby monkey home?' face...sigh.
January 6, 2012 at 1:48 AM