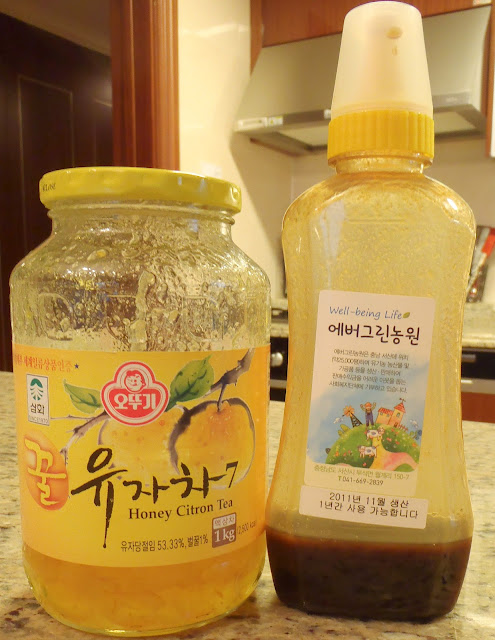 My regular blog readers will be aware (how could you have missed it, with all the whining?) that we at AsiaVu have had a challenging Winter as far as cold and flu season goes. In a clear case of One-Upmanship, no sooner had I been diagnosed with my case of Extreme Laryngitis, then MrLogical succumbed to his own batch of germs, and has spent the last week or so alienating my affections stubbornly battling his own personal respiratory demons - mostly in the form of coughing all.night.long.  Even Son#2 - who had thus far made it through the entire school year without missing a single day and ordinarily bursting with the rude health of the Young - finally went down with what we have generically termed 'The Funk.'
As you would expect, along with our antibiotics we also pulled out all our tried-and-true home remedies:  hot tea, hot baths, Vicks Vaporub, humidifiers, chicken soup, and the like.
What's different now that we're in Korea is that we have access to Korean home remedies, and lately we've added two more items to the arsenal in the hope that they'll prove more effective against Korean germs than our ineffective waygook* comfort measures.
I was introduced to the first when I was sick back in December.  Son#3 (honorary title for Son#1's Korean friend) brought it over and explained that, while many Koreans drank it just because it tasted wonderful, it was also very good for colds and flu.  It was a Honey Citrus Tea concentrate, which you can buy at any Korean supermarket. 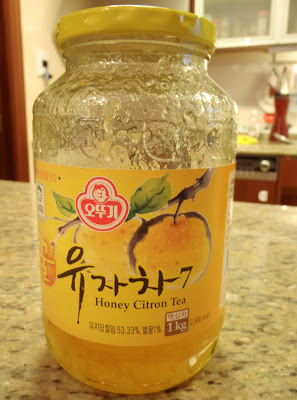 This seemed perfectly reasonable, since tea with honey and lemon was a familiar remedy to me from my childhood.  I had just never seen the ingredients in this form before: 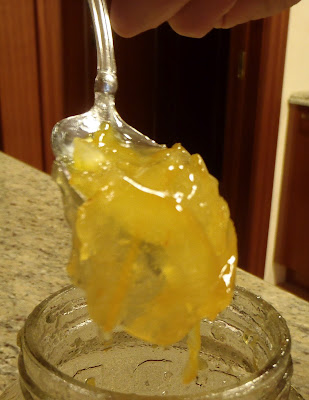 It's sort of like a lemon curd jam, with slices of lemon peel in it.  Dissolve a spoonful or two in a cup of nearly-boiling water and stir.  Soothes sore throats like a charm.  Also smells really good.
The second remedy was actually given to MrLogical by a concerned Korean co-worker who heard him coughing like he was trying to expel a lung and insisted that he drink a cup of this tea: 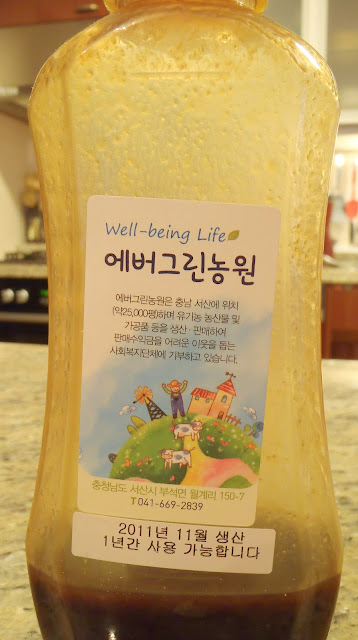 Whether the co-worker provided the tea out of concern for MrL's welfare or out of alarm at the frightening intensity of his coughing remains unknown:  in either case, the tea is a sweet and spicy ginger tea. In case you don't speak Korean, you can tell by smell and taste (or by this helpful photo of a ginger root on the back label:) 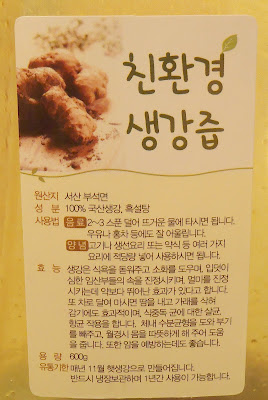 At the risk of jinxing ourselves, it seems like we're all finally on the road to recovery.  How much of it was due to the Korean remedies, we'll probably never know.  But we're happy we found them, and next year?  We'll be prepared.
*Korean word for 'foreigner'
Email Post
Labels: expat life illness Korean home remedies

broken biro said…
Mmmm. I LOVE lemon curd AND ginger. It's funny - I was told ages ago that lemon and ginger tea is the best thing for a bad throat, but this stuff looks like the dog's bollocks (in a good way - not meaning to imply Korean remedies may actually contain... oh never mind)
March 8, 2012 at 7:44 PM

Unknown said…
The honey-citrus looks yummy! I bet that would be good on shortbread cookies!
March 8, 2012 at 9:08 PM

Karen said…
It looks good...and I really want some to soothe me. Working on an almost cold that maybe is going to blossom and also need something to soothe my savage breast, since it is progress report day here.
I think the Koreans know how to treat a cold...and stress!
Glad you are all better, hope springtime continues to make progress. 63 degrees here, today!
March 8, 2012 at 10:22 PM

MsCaroline said…
BB- Ha! Since I don't know much Korean, I can't read the ingredient list, so we'll never know...

Joy - It probably would - reminded me a lot of marmelade!

Karen - As far as I can tell, Koreans practically NEVER take a sick day, so I guess they need to have a lot of these comforting remedies to keep them going at work. Hope you can fight off the cold with a restful weekend - we're still in the 40s here, but I am NOT complaining!
March 8, 2012 at 10:51 PM

Hails said…
Reading this post reminded me that I had a jar of honey citrus ginger lurking on a shelf somewhere... I hunted it out and brought it to work with me today. Currently on my third cup, and I swear I haven't coughed even half as much as I did yesterday! The ginger really does seem to work - you can actually feel it burning through all the ick. I'm sure that's the correct medical term.
March 9, 2012 at 3:52 AM

MsCaroline said…
Hails - So glad the post reminded you of something useful! And your description was very accurate - I just bet that the back of the bottle says, "Ginger Tea: Burns Through The Ick!" : )
March 9, 2012 at 11:44 AM

Trish said…
I do hope you're all on the mend with your extra remedies. Touch wood, we've been ok here this winter but my mum has been suffering from a poorly chest for the last few weeks. It's the constant coughing she says is so wearing. Will suggest extra honey and lemon for her too.
March 11, 2012 at 8:55 PM

nappy valley girl said…
The honey citrus sounds good. (Like you, I always turn to hot honey and lemon in times of colds.) My German friend swears by a spoonful of honey with neat cinammon powder every day - it's very strong and not all that nice, but she is convinced it works.
March 12, 2012 at 9:40 PM

BavarianSojourn said…
I actually like the sound of those home remedies! How are you feeling now? Emma :)
March 19, 2012 at 7:52 PM

MsCaroline said…
Emma - yes, I have to say that I didn't mind taking them at all! I think it's safe to say that I'm finally back to normal - although at the moment there's a nasty stomach virus making its rounds through the kindergarten - cross your fingers for me!
March 19, 2012 at 9:58 PM