(Note: I realize that this is technically supposed to be a blog about living in Asia, which makes a post about Texas in the Spring somewhat incongruous.  However, I would imagine that most expats experience some longing for Springtime (or Summertime, or whenever) Back Home, which means that this post is actually more germane than it seems.)


(Additional Note:  As it turns out, "Lone Star State of Mind" is the name of a 2002 film which I have never seen, and may be a song, too.  I have never seen/heard either of them, but obviously the phrase stuck somewhere in my subconscious when I was thinking of titles for this post.  In my case, the title refers to the fact that I 'm thinking about Texas in the springtime.  That is all.)


Spring is coming to Seoul.  The days are starting to get warmer, with temperatures as high as the low 50sF/12-14C each day.  The cafes are putting their chairs and umbrellas out on their patios again, and not nearly as many people are walking around wearing hats and gloves.  It's been (to quote Pooh Bear) very blustery, and we've had a few grey and rainy days, but I am not complaining, because rain means it's too warm for snow (how's that for some advanced logic?)

It goes without saying that I am really looking forward to Spring this year, especially after making it through (what turned out to be a record-breaking) winter in Korea.  It will be my first Spring in Seoul, and I've been told that it is lovely, complete with cherry blossoms just like neighboring Japan.  At the moment, however, everything is still grey (or, more accurately, brown) and dreary -nothing green quite yet.

But, back in Texas, it is getting to be Spring.  Ecstatic FaceBook posts from friends and family tell me that temperatures in South Texas are in the low 70s/about 23C, and the sun is shining again. Son#1 (at University in TX) is talking about Spring Break plans for camping and outdoor concerts.  People are cleaning up their yards and mowing their lawns.  I know there must be new green leaves showing up on the Live Oaks; the Texas Mountain Laurels are getting ready to bloom (their distinctive grape Kool-aid aroma should really be the topic for an entire post of their own) and the Redbuds are probably on their way.  But right now, what I am thinking about most are the Bluebonnets.

I might have heard of Bluebonnets once or twice before moving to Texas - that is, I think I may have known that they were some sort of blueish flower - but I had certainly never seen one, and certainly never seen a field of them.  When we moved to Texas in February of 2005, I was coming from Arizona, where our Springs for the last 6 years had been brief glorious explosions of bright wildflowers and cactus blossoms in a rocky desert landscape - a breathtaking sight as the desert threw all its energy into a brief burst of glory before the long, hot summer arrived.


South Texas was not much different, temperaturewise, but its landscapes were a huge change.  We left behind us craggy mountains, rocky foothills and mostly-barren mesas studded with towering Saguaro cacti, and arrived in the gentle, rolling landscape of the Texas Hill Country.  Oh, there were still cacti, but these were mostly low and shrubby, blending in among the twisted Live Oak trees and tough meadow grasses that somehow managed to survive in the dry, rocky soil.  Those differences notwithstanding, I was not expecting Spring in Texas to be too much different from Spring in Arizona:  patches of ebullient, riotous blooms in an otherwise rocky and forbidding setting, rushing to do their work before the arrival of the long, arid, summer.

But then, it was Bluebonnet time.

It was probably March or April when I first noticed them in people's front yards as I walked by in the morning on the way to the bus stop with Son#2.  There they would be, a few green stalks topped with blueish-purple blossoms.  I thought they were a sort of grape hyacinth. 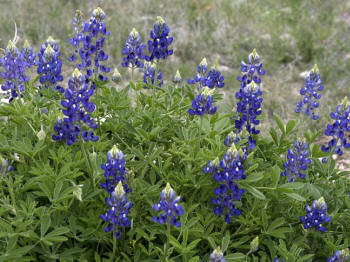 A few days later, I noticed a cluster of them on the grassy median along the freeway.  (Texas maintains a 'no-mow' zone along many of its roadways in the spring, and it's an absolute joy in orderly suburbia to see a tangled riot of wildflowers waving in the breeze between the grim lanes of traffic.)  An interesting note about bluebonnets is that, while they are pretty in a small group in someone's front yard, they are breathtaking in large groups, especially in a climate as scrubby and rocky as the Texas Hill Country's. 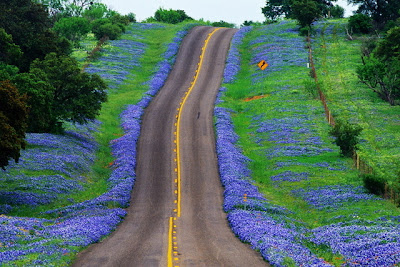 After that, I started noticing them everywhere.  In addition to the tiny, delightful blooms popping up in my neighbors' lawns, I saw them popping up in fields, in vacant lots, on highway medians, and in parks.  Driving out into the Hill Country, you would see huge swaths of them in fields, along rural roadsides, and spangling the grass beneath horse fences.  And it wasn't just the plants I saw:  there were Bluebonnets on the tea towels and coffee mugs that tourists bought while checking out at the supermarket.  I saw packets of Bluebonnet seeds at the gas station.  Friends at school or church would show me photos they'd taken of their children sitting in field of Bluebonnets (I don't know if it is an actual law, but it is practically a requirement for Texans to have family or pet photographs taken sitting in a field of bluebonnets.  This is something we never did while we lived there and I still regret it.)  There are Bluebonnet festivals, Bluebonnet garden shows, trips to the beloved LBJ Wildflower Center, and of course, there is the Legend of the Bluebonnet, which I'm pretty sure every Texas child hears or reads at some time.  The point is, Texans love their bluebonnets, and they really are everywhere:

Of course, I enjoyed all of the Spring flowers, but the Bluebonnet, for me, was such a lovely surprise that first Spring, that I always got a thrill of excitement each year when they started to bloom.  For me, nothing says 'Spring in Texas' like Bluebonnets, and I'm just now coming to the realization that I'll be missing them this year.

Don't get me wrong:   I'm looking forward to experiencing Seoul in the Spring:   warm days, cherry blossoms, and more of those long walks along the Han River.  I'm curious to see how Spring comes in this sprawling high-tech, international Asian metropolis.  In the big picture of my nomadic life, Texas is just one of many places that I've called home:  I have seen Spring come in many places and in several countries, and each one was beautiful in its own way.

But right now, a field of Bluebonnets would be a sight for sore eyes. 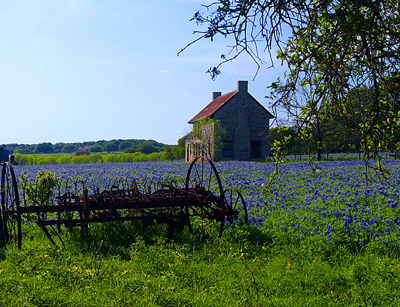 BavarianSojourn said…
Hard sometimes isn't it when you know you are missing out on warmer weather, and flowers that remind you of home?!
March 4, 2012 at 2:51 PM

MsCaroline said…
Emma - so true, and you're so perceptive! I accidentally published that post before I had written more than the introduction - funny you were able to pick up on that from only a paragraph!
March 6, 2012 at 2:57 AM

MsCaroline said…
JCJ - I agree - the Longhorn photo was my favorite, too! Thanks for stopping by; I've left a comment on your latest post - really enjoyed reading through all your previous postings!
March 6, 2012 at 10:57 PM

About Last Weekend said…
Early spring time here in the Bay Area with my proteas blooming already. I've not been down to Texas but this view looks gorgeous...
March 7, 2012 at 4:37 PM

MsCaroline said…
ALW: Had to go to Wikipedia to find out what Proteas were; so that's what they're called! I remember seeing them in CA but not knowing what they were called. At this point, I would be happy with a dandelion - just anything that blooms!
March 7, 2012 at 9:24 PM

Scattered Singles said…
You don't have to go as far as Asia to miss bluebonnets! Missouri is too far away for me!

Scattered Singles said…
You don't have to go as far as Asia to miss bluebonnets! Missouri is too far away for me!