As I've said before, being part of the expat community means becoming close to people in a short amount of time, and saying goodbye much more often than you do back in the 'real' world.  People in the expat world come and go with astonishing frequency;  Son#2 has already said goodbye to several friends he just met in August, and we already know a number of families that will be leaving this summer.  Today we had to say 'goodbye' to two people who have been an important part of our little expat 'family' since our paths first crossed barely a year ago.  MrL and MrA were working in the same office, both living in temporary accomodations in Seoul while we - their respective wives - packed up house and tied up loose ends back in the US.  I still remember MrL suggesting to me that I 'friend' MrA's wife, 'B,' on FaceBook, so we could forge a cyber-acquaintance before meeting in person in Seoul.  We commiserated long-distance over the headaches involved in trying to move house internationally, the excitement of seeing a new country, the heartache involved in leaving friends and family behind.
By the time B and I actually met in person in late June, I felt like I already knew her.  She was the first friend I made in Seoul, and I soon discovered that she was a person who grabbed life with both hands. 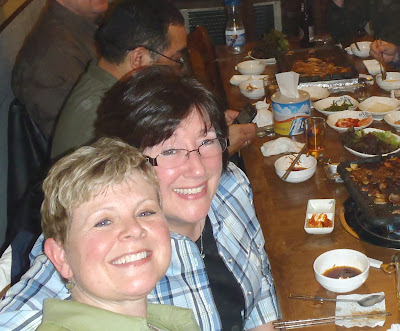 Whatever hair-brained scheme I came up with (Chicken museum? Foot-nibbling fish?) she was game to try it.  Within weeks of arriving, she'd used her incredible internal gyro to learn her way around Seoul like a native, mentally mapping the markets at Namdemun and Dongdemun with unerring accuracy, like some sort of superhuman GPS.  Need to find something in Seoul? B could tell you where to find it - and exactly how to get there.  Unlike so many expats (such as myself) who slowly and timidly worked their way in to life in a new country, she plunged in, and embraced it all, enjoying the people, the culture, and the experiences - fearlessly, enthusiastically, and with relish.  After her kids went back to the US at the end of the summer, I remember thinking that B had probably seen and done more in three months than most people do in an entire stay.  She was always ready to try something new, meet a new friend, visit a new place.  Didn't turn out so great? No problem.  It was still an adventure.  She always had time to meet me for one of our infamous 3-hour 'lunches,' laugh with me over everything and nothing, listen when I needed an ear, share teen parenting advice when I needed it, and encourage when I needed encouragement.
But the friendship wasn't ours alone.  Since MrL and A worked together, we were all often together at company functions, as well as the other get-togethers in our little expat community.  We had dinners together on weekends, explored Seoul, shared a Thanksgiving.  A & B got to know our children ( Son#2 dubbed them, "my other parents") and - when they came to visit that summer - we got to know theirs. Back home, in the 'real' world, a couple you'd only known for 6 months would be considered new acquaintances.  In the expat community, friendships grow exponentially, watered and fertilized with a rich combination of mutual dependence, a dash of homesickness, the sense of shared adventure, and the understanding that you are a little bit like castaways - sharing a small familiar island isolated in an enormous ocean of the foreign culture.

So, as you can imagine, when we heard that they would be leaving at the end of March, we were stunned.  Saddened.  Disappointed.
Oh, we were happy (ish) for them - they'd be returning to friends and family, a great position for MrA, a location near their kids - but at the same time, we couldn't help but feel sorry for our own loss.  It seemed so cruel for us all to get to know each other, and -in just under a year - have them leave.
But this is it:  friendship, expat-style.  You have to make friends quickly and fearlessly.  If you think too hard about where you all might be six months or a year from now, the inevitable partings to come, the uncertainty of the whole arrangement - well, you'd never make any friends at all.  So you plunge in.  You open yourself up, put yourself out there, extend your hand, and take your chances.   And yes, there are partings, and tears, and different continents and time zones, but at the end of the day, you know what?
It's worth it.
Safe journey, friends.
Email Post
Labels: expat life friendships saying goodbye

Emma said…
It's so incredibly worth it isn't it? There's nothing like common ground to forge friendships, even in our transient lives! But you are right, saying goodbye is the hardest part of the deal :(
March 28, 2012 at 8:09 PM

nappy valley girl said…
It's very tough, isn't it. I will be saying goodbye to my closest friends here in the summer when she returns to Europe. As a fellow expat, she really helped me settle in here and our children have become almost like brothers. We've shared Thanksgiving, lots of lunches and playdates, even drinks on Christmas day. Even though we'll be leaving ourselves next year, the coming year will be really different without her.
March 28, 2012 at 10:43 PM

MsCaroline said…
NVG- It's amazing how the shared expat experience really does accelerate and intensify friendships. One thing that's helped me this time has been knowing that I'll see them again when we're on home leave this summer, so we've been able to say, "see you in July" instead of just "see you sometime." Hope you'll be able to see your friend when you get back home too!
March 28, 2012 at 11:30 PM

Elizabeth Musgrave said…
You are a fabulous writer Caroline. I feel as if I know your friend myself. I love people who jump in like that. I try to embrace whatever comes my way with interest and enthusiasm but I don't think I am a natural leaper inner. The speed with which expat friendships develop is a fascinating contrast to the way they happen in a rather old fashioned rural environment like mine where it has taken about five years to make local friends who actually cross your threshold rather than chat in the street!
March 30, 2012 at 9:29 PM

Circles in the Sand said…
We've been so lucky that families from my husband's company tend to stay here a while. When the crash happened in Dubai a couple of years ago, families where the DH worked in, for example, construction went through the toughest time, with some having to leave with barely any notice. I was reading a blog recently about different styles of leaving - the author had a friend who 'left by stealth'! She couldn't face the goodbyes so didn't tell anyone they were leaving! Another example (while I'm on a roll!)- my friend in Azerbaijan says it's so transient there that when kids are off school with coughs, colds, etc, the other kids all think they've left! Your friend sounds truly amazing - I'm so sorry you're losing her.
March 30, 2012 at 9:59 PM

MsCaroline said…
Trish - Come now, where's that stiff upper lip? ; ) I really wanted it to be more of a positive thing, but I got choked up writing it myself, I hate to admit. I think I should probably stick to whining about the cold...less painful!
March 31, 2012 at 1:26 AM

MsCaroline said…
Elizabeth - thank you so much! I have to say that I am definitely not a natural leaper-inner either. I was absolutely agog at the way B navigated her way around! As far as the rate at which friendships develop, I suppose it's because most of us have no friends or family here and are very much 'in need' so to speak. When I first got here and had to fill out Son#2's school forms, it was humbling - and a bit frightening- to realize that - besides MrL and myself, there was no other person that I could think of for the school to call in case of emergency...and everyone is in the same boat! There's just no time to wait for friendships to grow slowly - most of us would be gone in 5 years!
March 31, 2012 at 1:35 AM

MsCaroline said…
Circles- you *are* lucky, although I think that it very much depends on your husband's line of work. In our case, most people come initially for 2 years with options to extend, but that can change without notice. At the school where I work, 2 children have moved just since the beginning of February - 1 to the US, 1 to Germany - and we have 3 new ones coming in the next 3 weeks. I can actually sympathize with your friend leaving 'by stealth.' The goodbyes are the worst part, and I hate them myself! I will definitely miss my friend, but it's been wonderful knowing I'll see her in July!
March 31, 2012 at 1:40 AM

Anonymous said…
Hello! Quick question that's entirely off topic. Do you know how to make your site mobile friendly? My site looks weird when browsing from my iphone. I'm trying to find a template or plugin that might be able to correct this issue.
If you have any recommendations, please share.
With thanks!