All is well here in Seoul.  We're here in the hotel in an efficiency apartment that has everything we could ever desire, including a very nicely-stocked kitchen and a lovely view of Seoul.  I really wouldn't change a single thing.

Except for maybe the laundry situation.  I am referring, of course, to the washing machine.

Now, before you take me to task for complaining about the washing machine, let me assure you that I am well aware that many expat wives in other countries have no access to any laundry facilities at all (at least while in temporary lodgings) and those women -who are washing everyone's knickers in the bathroom sink and draping them over the furniture to dry- would give their right arms to have access to a washing machine of any sort.  And of course, having grown up overseas,  I knew there'd be adjustments, and that would include the laundry situation.  So, no, I wasn't expecting two American-style heavy-duty super-capacity machines.  However, I was expecting that the provided appliance would actually wash and dry the clothes.

But there you are.  Changing your expectations is part of the whole expat experience, right?

In theory, this little machine is actually a clever, space-saving idea in a city of 12 million people, most of whom live in small apartments, functioning first as a washer and then as a dryer.  And believe me, I wasn't expecting to have a washer or a dryer in our temporary lodgings anyway, so I was thrilled to find this little guy tucked into the corner of our kitchenette. 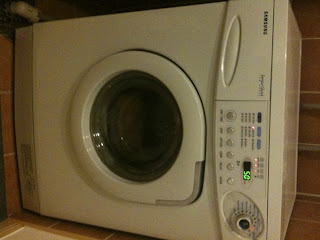 Of course, this isn't my first time around the block with appliances, so I know that, as a rule, the more things a machine claims to do, the less effectively it does them. So a machine that claimed to both wash and  dry clothing efficiently would have to be taken with a grain of salt.  And yet.... I was seduced by this machine and its expansive claims.    It told me it could wash and then dry anything:  bedspreads, curtains, towels, you name it.  I mean, it even gave you the option of boiling things.  My full-sized machine at home could never have done all that. 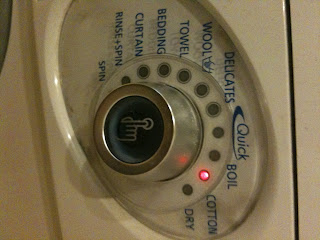 So, needless to say, I was thrilled.   Instead of having to move into the new apartment with a garbage bag of everyone's dirty laundry in tow (and 10 loads of laundry to do on our first weekend in the new place), I'd be able to keep up with the laundry right here in the hotel.

Taken in by its seductive promises,  I optimistically tossed in my first load of approximately 3 items (all that would fit.) The little machine churned and spun and sudsed and shook and hummed and (presumably) washed away for approximately ninety minutes, at which time it started spinning the clothes.  Since this spinning (logically) has to remove as much water as possible before starting the drying cycle,the process has to be pretty energetic.  It sounds very much like a plane right before takeoff, and  I was very encouraged by this auditory demonstration of efficiency.

Once all the water had been centrifuged out of the garments, I had to re-start the machine, this time on 'dry.'  And off hummed my new friend, tumbling the clothes merrily away and giving every indication that drying was taking place.

A mere 90 minutes later (for those of you who are counting,yes, that's 180 minutes for 3 shirts) I trotted confidently to the appliance, opened the door, and -  pulled out three damp shirts.  Not ' mostly dry with a few damp collars 'or 'dry except for a moist hem';  I'm saying nothing was dry.  Everything was warm and damp.  It was as though the last 90 minutes had never happened.  Nonplussed, I marched into the sitting area to demand that Mr. Logical - who has been living in this hotel since April - come take a look at the machine and figure out what's wrong with it.

Suddenly, Mr. Logical got up and walked to the machine.  For a brief moment, my heart leaped.   I was sure that he would press a button or turn a knob and  - poof! - solve my problem.

Nope.  He just got up to get me the other laundry accessory thoughtfully provided by the hotel. 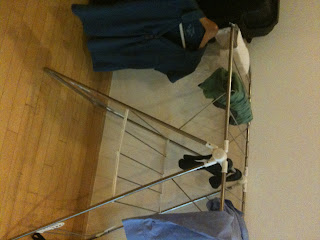 Daria Valdez said…
HA! BOIL!!!!! Wouldn't that have been something! Wow, after 180 minutes I would have expected amazingly clean and dry shirts! And only 3 fit no less. I love the pics too Caroline. And the cool thing is the machine is labeled in conveniently in English! Missing you! Daria
June 23, 2011 at 12:25 AM

Muffin said…
I love the "boil" setting. As in,
"Mr. Logical, let me "boil" your cycling gear after your long ride."

C...I commiserate with you. I've been living with the same drying situation for 8 years up until 2 weeks ago. The drying station was lovingly placed in our bedroom. NOT the best thing to wake up to in the morning.
June 23, 2011 at 2:44 AM

Hails said…
I think I've become so used to this that it didn't even occur to me that it was unusual until I saw it from your perspective! :) At least your washing machine is in English. I had to get my boss in to show me how to use mine!
June 23, 2011 at 7:27 AM

MsCaroline said…
@Daria: miss you too! I think the English was just there to fool me into thinking it would do what it said...
@Muffin: you know, maybe this little machine DOES have some positive attributes after all! We always drip dry the cycling kit, but I never once considered how helpful boiling might be...
June 23, 2011 at 7:27 AM

MsCaroline said…
@Hails: This one is in the temporary apartment that caters to foreigners, hence the English. However, it looks like the one in our real apartment will be in Hangul. Maybe I'll have to have you show me how to use it!
June 23, 2011 at 8:12 AM

Wilma said…
I'll take it!! Even if it doesn't dry and only holds 3 garments it still beats the heck out of carting it down the stairs and feeding quarters into machines that may or may not work on any given day. :)
June 23, 2011 at 8:34 AM

nappy valley girl said…
Haha - you've been living in America too long. I'm used to having a huge great tumble dryer now but in London, we dried everything on a rack. Our washing machine did in theory have a drying function (like yours) but the one time we used it, it went wrong.
June 24, 2011 at 7:22 PM

MsCaroline said…
Nappy, you're absolutely right. I was just taken in by the machine's grandiose claims. I should have known this was coming. I am panicking, however, as we'll be adding Son #1 to the household tomorrow; he has been in the US visiting friends for the last 2 weeks and has doubtless not done a lick of laundry the entire time. Better clear off the 'dryer'.....
June 24, 2011 at 10:54 PM