Skip to main content
Labels
Posted by MisterLogical May 08, 2011

From the Land of the Morning Calm: Back on the Bike

After three weeks in Seoul, the stars aligned and I finally had the opportunity to get out on a bike. I had pretty much resigned myself to the not being able to ride until after heading home for Son #1's graduation, having left the bikes and related gear back in San Antonio.

As luck would have it, husband-of-a-sister-of-a-coworker networking came through, and I was able to meet TC, a like-minded pedal masher and all-around adrenaline sport enthusiast. He was kind enough to offer the use of a set of wheels and miscellaneous gear, and with some good weather cooperation, we were set to ride this morning.

After navigating my way to TC's neighborhood via subway, we met up and enjoyed a hearty breakfast and coffee with MC (TC's wife). TC had outfitted two mountain bikes with semi-slick tires, offering up the plan to head over to Ganghwa Island, west of Seoul. Since I am "FOB" ("Fresh off the boat", per TC), I told him I was pretty much up for anything that involved pedaling and the opportunity to see some areas outside Seoul.

We drove west of town, crossing by bridge over onto Ganghwado, and eventually found a place to park the car and gear up. The island was gorgeous, with tall mountains,extensive agriculture, and thankfully, much less traffic than Seoul. 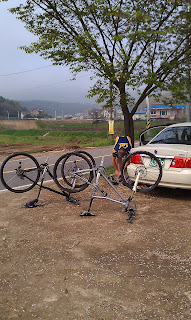 Straight out of the car we had a long climb up over a mountain pass, so that kickstarted my body, and after huffing and puffing over the hill, I settled into a more comfortable rhythm.

We pedaled towards the coast, riding the butter-smooth new paved roads towards the west. The views were amazing, and the weather was gorgeous. TC let me know that he tended to "generally" know where he was going, but enjoyed following whatever road or path or trail looked appealing. Back at the car I had confirmed that I still had full strength cell and GPS signal (which would have NEVER been the case back home), so I was game for anything.

We eventually made it over to the coast, and to the Ferry Boat, where we paid the $5 roundtrip fare and headed over to Seongmodo Island.

After pedaling through more and more obscure trails,to pathways to muddy jeep trails to rice-paddy dikes, we ended up dead-ended at the woods leading up to a ridgeline. TC noted that Koreans really don't have the "get off my land" mindset, and he was pretty sure we'd find trails on the other side of the ridge. Sure enough, bushwhacking through the brush eventually intersected a jeep trail that dumped us out on an isolated beach.

We hiked along the shoreline, portaging over the rocky areas and eventually ended up at a small park on the shore. From there, we were able to make our way back to the road, and back to the ferry landing for the trip back.

After getting back on Gwanghwado, we stopped at one of the traditional seafood restaurants and had an amazing lunch of sushi, seafood, and fish stew. It all went down well with Makali, a milky Korean rice-wine served in a small bowl. After enjoying a great meal, we mounted back up and began the climb back over the mountain pass to the car.

We had lingered long enough enjoying lunch where we had to fight the 2-hr "Sunday afternoon return to Seoul" traffic jam, but TC was great company and the time went quickly.

I'm definitely looking forward to getting my bikes and other outdoor gear here, and it looks like there will be plenty of opportunities to use it all..

I hope I didn't offend too many people on the subway with my "post-ride funk"...