(Yes, I know it’s a horrible title, but Mr. Logical is clearly sitting down on the job; I know for a fact that he possesses  photographs of Costco in Korea, but has not yet posted them.  I’m doing my best to fill the gap, but I realize that there is no way I can compete with shrink-wrapped squid.  I think we all know who’s to blame.)
A second week has gone by with Mr. Logical in Seoul.  We have fallen into a routine of sorts, Skype-ing each other on our alternate mornings/evenings.  It’s still disconcerting for me to think that, while I’m just getting up, he’s already finished his day and is heading to bed – kind of like time travel or something.   I’m getting used to it, though, and am remembering when to say ‘Good Night’ and when to say, “Have a Good Day.”  We’re all missing him very much, but we’re busy enough that the days are going by very quickly.  Son #2 keeps a running total on the calendar: 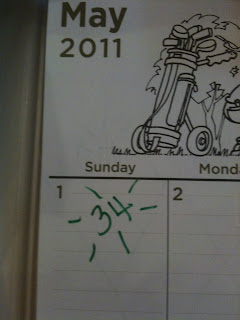 While I’m handling things like bills and car repairs and school functions just fine on my own so far, I am having less success with lawn and garden care.  While I enjoy gardening, lawn care has never been my passion, and I have always been perfectly happy to leave that aspect of household maintenance up to Mr. Logical, or landscapers, or (more recently) my sons.  Both boys understood that, as part of their ‘Help your Mama’ covenant, they were expected to mow the lawns, weed-eat, edge – you know, basic suburban American lawn care.  However, what I had failed to reckon with was that our lawn care equipment is – at best – cantankerous, and – at worst – downright undependable.  Mr. Logical, with his ‘machine whisperer’ skills, can make anything with a motor obey his commands, so the fact that the lawnmower only starts if you hold your mouth just so was not a problem for him, and, of course, this was not at the forefront of our minds when we were getting him ready to leave for Seoul.
The fact that some of our equipment dated back to the Clinton Administration meant that, any time the boys needed to perform a lawncare task, Mr. Logical would have to essentially brutalize the necessary piece of machinery into working before handing over the already-running machine to whichever boy was on duty at the moment.  Naturally, now that he’s gone, the boys are struggling to get anything to run or – in some cases - even start.  After ignoring the situation until the lawn began to look more like a pasture, I finally girded my loins and announced to the boys that we’d be tackling the beast this weekend.
Needless to say, this led to some pathetic moments.  Yesterday I had to call on Neighbor M. to come and start up the lawnmower,  and not long after that, Neighbor R (no doubt concerned about his  plummeting property values)  appeared out of the blue with an edger and proceeded to edge the entire front lawn for me.  If they had ridden up on white chargers in glittering armor, I could not have been more grateful and impressed.
While we're on the topic of lawn care, I might as well just point out that – as I predicted – the inground sprinkler system did, indeed, prove to be my Waterloo.   Here in Texas, we are in the grip of a drought – not unusual for this part of the country, but definitely unusual in the fact that it is only May and we are already in water restrictions.  It has not rained any significant amount here since February, and the outlook for rain is bleak.  As a result, watering of any kind is severely restricted.  Since our watering system was set to run two or three times per week, naturally, as a law-abiding citizen, I needed to re-set the thing.  Naturally, I had no idea how to do that, which resulted, initially, in some rather Keystone-cops like random sprinkling at odd moments, and culminated in another frustrating Skype call with Mr. Logical trying to walk me through the procedure from memory.  This, of course, was unsuccessful.  Conversation became heated and tempers were short.  Eventually, I solved the problem this way: 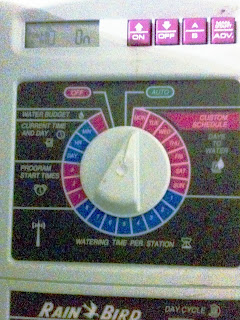 That's right, Dear Reader.  I took photos of the display and e-mailed them to Mr. Logical, who was then able to walk me through the procedure.  Peace was restored, and all was harmony.
However, after this weekend, I've decided that, as a Modern Woman,  I am going to be proactive about the lawn and garden care.  I'm not sitting passively by, waiting for my neighbors to bail me out.  I'm not waiting until things get out of hand anymore.  No more struggling with antique equipment; no more trying to decode complex programs.  No more wondering which one of the two gas cannisters holds the right fuel for the lawnmower.  That's right.  I'm calling a Landscaping service.
Email Post

Wilma said…
You're too funny, Carolyne! I have to admit that is one of the things I like about living in an apartment--the landscapers appear like clockwork every week and it's not my responsibility or my dime. I'm neither a landscaper nor a gardener. LOL
May 3, 2011 at 12:20 AM

Karen said…
Smart woman!! I would have done that before last weekend, so I guess that makes me smarter.
What nice neighbors you have! I'm sure you will miss them once you are actually in Seoul. Although I did all my yard work prior to meeting Neil, and in fact did most of it for the first year we were living together, once I became pregnant he took over and I have left it with him ever since. I still plant a few flowers, rake, mulch, and shovel, however, HE mows, plants a garden and helps with the aforementioned raking, etc. When he went away for extended times in the summer....I hired out, no matter the cost. So what if the kids didn't eat, Mommy didn't have to do yard work! As for the technical arguments over the phone, I can so relate. Wonder if it has to do with the fact that my man can't really be bothered to actually communicate in such situations...I should just know what is in his mind, after all!! Hang in there, 34 days doesn't seem too bad!
Karen
May 3, 2011 at 12:27 AM

MsCaroline said…
@Wilma: oh, how I look forward to the clockwork appearance of landscapers every week....

@Karen: Yes, you are smarter, or at least less lazy. And yes, my neighbors are gems, although these particular ones are both our friends AND our neighbors, so I can't just chalk it up to average neighborliness. Note: I used to do all my own gardening, too, but that was back when the lawncare equipment was new and functioning....I just don't have enough time in my day (not to mention enough muscle) to coax, say, the gas-powered weedeater into life and also control its unpredictable behavior. This will, fortunately, not be a problem when we are living in our apartment in Seoul, although I guess I will miss my garden at times...but not that much. ; )
May 3, 2011 at 12:36 AM

MsCaroline said…
@DD: You can see why I had to include the photo then, right? I didn't want to be accused of exaggerating...I too, once had a watering can, but that was before we moved to the Southwest..
May 6, 2011 at 12:43 PM