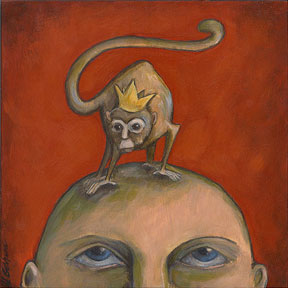 Let no one say that the Buddhists don't have a firm understanding of the human condition.

I would like to say that I've been tremendously efficient, keeping detailed lists and running the household like a well-oiled machine, but the truth is,  I'm flying by the seat of my pants most of the time.  I do have a list - of sorts - but it's on the back of a flyer about the Honors Orchestra Houston Field Trip and covered with random jottings and anonymous phone numbers, mixed in with notes to self, like, "Shot recrds?" ; "Dog flight resvs." "Grade German I chptr tests"and "Don't frgt to pack Tony's"( a staple in any home with a Louisianan husband which will, presumably, be unavailable in Korea.  Niche market, you see.)

Oh, I don't begrudge Mr. Logical his little outings and the glamorous expat lifestyle.  But there have been a few* times that I have thought longingly about just how nice it would be if I were the one living alone in an efficiency apartment in Korea and he were the one trying to get the boys to just pick up their jeans off the floor, for God's sake, so the housekeepers can vacuum.

I am scheduled to meet with the Realtors this week to put the house on the rental market, which also means that I have hired landscapers and housekeepers to maintain the property so that someone will actually want to live in it. In between this, I am working, writing final exams, and scheduling things like the dog's flight to Canada and dental cleanings. To add to the circuslike atmosphere,  Son #1 has been in the throes of AP testing (last week and this week), which means he is vacillating wildly between smug confidence that he will knock the test out of the ball park (AP Stats) and glum resignation to certain failure (AP Physics).  These little mood swings are punctuated with late nights of study and actual consumption of espresso beverages (Son #1 is not a coffee drinker, so you see how extreme the situation is.)  Fortunately for me, Son #2, with a few years to go before he starts any AP testing, is still his peaceful, cheery self, although he's purchased himself a ukulele and can so far only play 3 songs, which - while they are wonderful, just wonderful - can get a tiny bit wearing.

So, I'm continuing to press on, meeting with Mr. Logical via Skype every morning to discuss the latest developments and add to the ever-expanding 'to do' list, which is increasing exponentially by the minute.

Of course, what do I do after that?  Write a blog post.


*well, no more than a couple hundred
Email Post