From the Land of the Morning Calm: Betcha won't eat this...

It's been a busy week, so I am a bit late getting this posted. 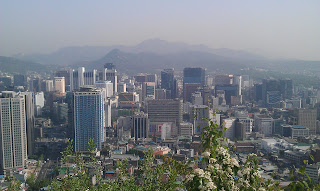 Last weekend was gorgeous weather here in Seoul, and I made the most of it both days. In the interest of being brief and avoiding the "TL:DR" smackdown from my son, I'll skip the invigorating hike up Namsan Mountain, tour of the Dongdamun Market, trip over to Yongsan, and Indian food in Itaewon (about 12 miles worth of walking, all told), and focus just on Sunday's festivities.

Sunday I went to the Noryangin Fish Market with MT and KT to look around and have some FRESH seafood for lunch. 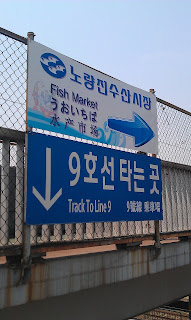 As we climbed stairs up out of the subway, I could just start to catch a whiff of what was waiting across the bridge. 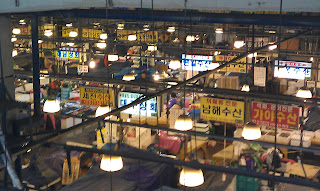 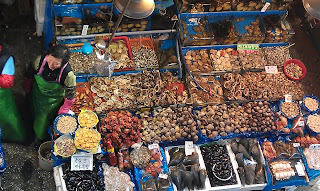 Once inside the warehouse-sized building the smells got a bit more intense, but we were quickly distracted by the myriad of fish, shrimp, squid, octopus, clams, whelks, crabs, skates, and just about anything else that one could find in the surrounding waters. 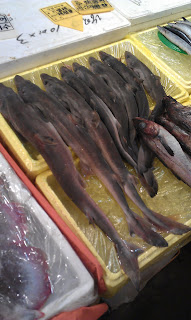 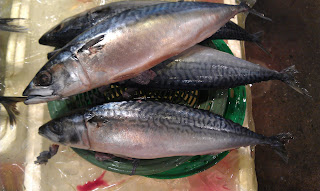 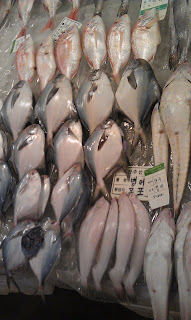 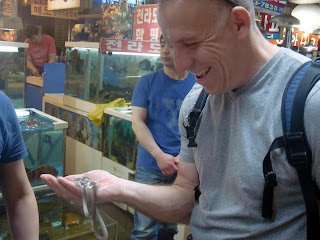 We walked around for a while, taking in the sites, before finding the vendor that MT and KT had bought from before. He spoke good English, and sold us a large flounder. He also helped facilitate the bargaining with the proprieter of the stall next to his, where we bought a large live King Crab. Finally, he steered us to one of the small restaurants around the edge of the market that specialize in cooking the live fare just selected from the market. 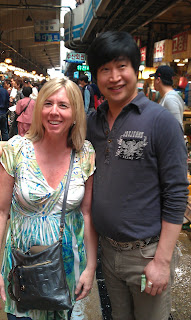 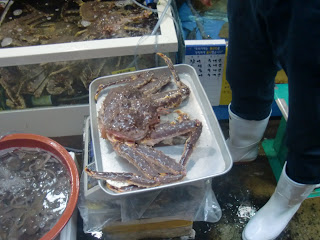 We took our seats in the small restaurant, and drank a few beers while we waited for our seafood to cook. As we sat and looked around, we quickly realized that we had WAY overbought, having picked a large Flounder and a large Crab. Either by themselves would have been plenty, as would two smaller versions of each.. 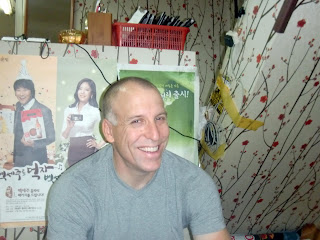 The grilled flounder was first out. It was expertly grilled, and served with lettuce for wrapping and several sauces. 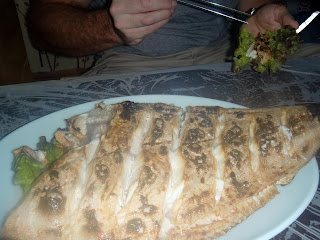 Luckily, we had enough beer to compensate for the embarrassment when the steamed crab appeared at our table. I manned the kitchen shears and got down to business disassembling an distributing the crab around the table. Luckily the king crab comes apart pretty much the same as all the blue crabs that I've peeled and eaten over the years, albeit on a somewhat larger scale. 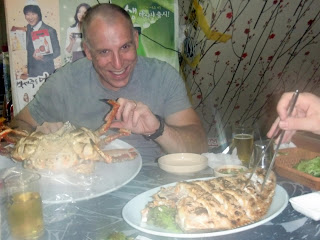 We didn't quite finish everything, but felt like we ate enough to hold our heads high as we waddled out of the restaurant and back out into the fish market. 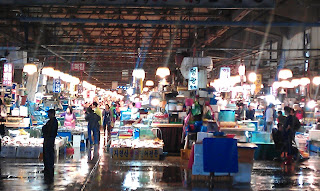 A good adventure and fun time with MT and KT...

Back to the title of this post.... Meet the "Fat Innkeeper Worm", aka the "Korean Penis Fish". 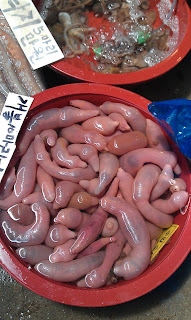 Randy Simes said…
Nice stuff. That fish market is right by where I'm staying here in Seoul. I am planning on going this weekend, or next, since I didn't make time to go last year while I was in Seoul.
May 23, 2011 at 12:07 PM