From the Land of the Morning Calm: Soju-head

After a good-natured poke from MsCarolyne, I figured I better get cracking and post an update regarding this past weekend's shenannigans. 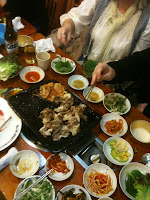 This past Friday, one of the guys at work (PK)invited me out for some dinner and the opportunity to check out the area that he lives in. PK is a native Korean, but spent a number of years in Plano, and as such, extended a hearty welcome from one semi-Texan to another.. Since MT and KT live in the next high-rise over, they joined us for some BBQ and a foot-tour around the dining district right across the highway. There were dozens of restaurants of all varieties, including a Vietnamese Pho place and a Sushi bar. Many of the restaurants here are very small, and range from very cheap to wildly expensive. Korean BBQ is cooked right at your table, and the food is all family style, with everybody grazing right out of the bowls with chopsticks. 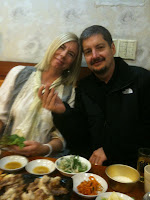 After a wonderful dinner, great company, and a bit of beer/soju/wine, I headed down to the subway to navigate myself home. It was my first solo ride on the subway, but once you figure out the basics it is not too difficult to get yourself to the proper exit station. The difficulty, however, comes into play when you realize the stations are massive and sprawling, with multiple exits. Jong-no station, where I got off, has about 12 and after wandering around a bit, I headed topside to see if I could figure it our from the street. That was successful, thanks to several well-marked skyscrapers, which allowed me to triangulate and head in the right direction.

Saturday morning was pretty uneventful, taking care of chores and spending some time getting a VPN service set up so I could get to Hulu and Netflix. I headed up to another co-worker's apartment around 6:30pm for a poker party. After losing my "buy-in" money way-too-fast, I sat out and acted as dealer for a while. I eventually bought back in, won enough to regain my dignity, and ended the night around 2AM with a bit of a buzz and most of my money recovered.

The alarm clock rang well before I was ready to get up, and I had nasty soju and beer hangover. I was marginally functional, but at least was able to make it down to the shuttle in time for a trip to Costco. 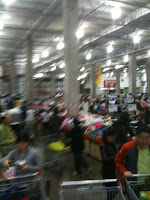 Like last week's trip to EMart, Costco was pretty amusing. It was everybit as packed as the Costco back home on a weekend, and the general layout was somewhat familiar. The Costco here, however, is multi-story, with shopping in the basement and ground floors, and parking on the upper 3 levels.

The familiar Kirkland brand was everywhere, and they even had many of the exact same items I had bought back in Texas. Some items, however, were not quite the same. I wonder if there will ever be a market for fresh octopus at our old Costco.. (They pack 'em vent-up, so you can tell they are fresh....) 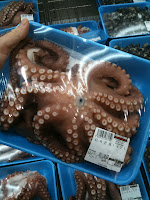 I was happy to find my favorite breakfast "Kashi-go-Lean", although I was tempted to buy Super-Amazing-Sugar-Bomb-Delight-Crunch. 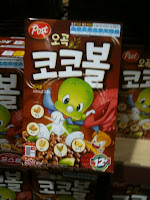 On the way out, the trip was completed in the standard Costco way, having the Hot Dog Combo and a Churro.. Some things are the same wherever you are.. 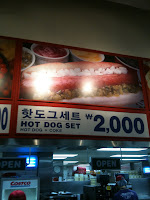 After getting back home, I relegated myself to napping and sleeping off the last of the hangover. Looking forward to a short week, with local holidays on this Thursday and next Tuesday.
Email Post

Randy Simes said…
Last year I took the bus all the time to get around, so today was actually the first day I took the Seoul subway. I could not believe how easy and intuitive it was to navigate...and this is coming from a big-time transit guy who has been living car-free in Atlanta for four months, and car-light for years.

What is most stunning about the subway, though, was how clean, fast, bright and functional it is. Even deep down in the tunnels you can get cell phone service, and many people are even streaming videos from the Internet as they coast through the city well below the surface. Korea's technology is truly impressive.
May 23, 2011 at 12:18 PM