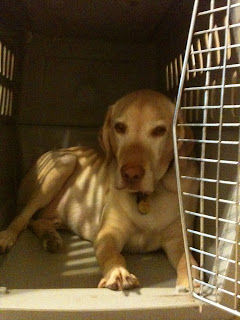 (Note:  Mr. Logical has been eating Indian food and hiking and shopping and photographing sea slugs at the fish market.  I think we can agree that these topics are much more interesting than microwave repair and Live Animal Transport, but it's all I've got.  Work with me.)


This past week, the gathering forces behind our move to Seoul have begun to come together with volcanic intensity.  The house (on the rental market), the car (needs repair, but who has time to get it to the shop?), the microwave (broken by the housekeepers and awaiting one rare and expensive part), and of course, there's my pesky job that requires me to be there every day, doing actual work.

What I have observed in this maelstrom (when I'm not thinking longingly about wine) is that nothing - nothing - is straightforward anymore.  Take, for example, the matter of Transporting The Yellow Dog.

Those of you who regularly read the blog know that our dog is being sent by air to Alberta, Canada, where he will live with my Cousin S.while we are overseas (sob.)  This would seem like a fairly simple undertaking:  Make reservations. Put dog in cargo kennel.  Deliver dog to airline.  Pay fees.  Dog flies friendly skies and is duly collected on other end.

Ah, but - as with everything else - nothing is ever as simple as it seems.  Apparently, shipping an animal by air these days is an activity that requires only slightly less regulatory oversight than, say, transporting toxic waste across state lines.  Let me be clear:  I know, it's all for the good of the animal, and I'm certainly in favor of my dog being treated well, but at some point the sanity of the owner really has really got to come into consideration.

When I called to make the dog's reservations, I was connected immediately to a 'Live Pet Transportation Counselor', who began our session by interrogating me about the size, structure, and ventilation of the dog kennel we presently own.  It was swiftly established that our existing kennel Would Not Do, and, in order to use their services, I would need to provide a new one that met airline regulations. Apparently, the kennel we have used for the past 6 years is woefully inadequate for air travel, because it didn't provide ventilation on four sides (ours only provides three) and, according to their calculations, the dog does not have adequate space in which to turn around, stretch out, and (presumably) host a dinner party.  My argument that the dog likes his kennel, frequently does turn around and stretch out in it, and often voluntarily goes there (usually to get away from the boys) held no water for the airlines, who clearly thought I was some sort of animal sadist.  No, the airlines would help me establish the right-sized kennel for my dog's needs.  In order to assure his traveling safety and comfort, I would need to take some simple (ha) measurements and perform some calculations.  Not being a math person, I approached this task with some trepidation, but since Son #1 is still taking calculus, I reasoned I had help close at hand should I need it.

In order to calculate the proper kennel size, I was directed to the website's Kennel Sizing Chart and its accompanying kennel-sizing formulae.  Yes, really.  Should you doubt me,  I herewith provide as evidence the schematic taken from the airline's website: 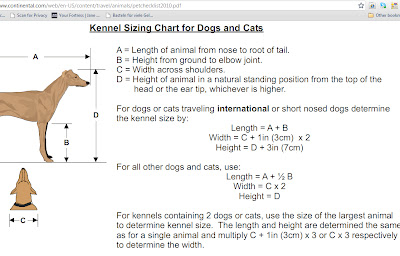 Just like everything else this week,, measuring the dog was not as straightforward as it would seem.  As it turned out, doing the calculations proved to be the easy part of this exercise, right after I recovered from the nasty flashback to high school Geometry.

In the first place, my dog rarely stands perfectly still in his 'natural stance' (for the record, the only time he ever stands in that position is when he is listening alertly for the sound of the garage door going up.)  In the second place, when you try to put the measuring tape by the dog's tail, he - quite rightly - turns around to see what you're doing back there.  Add to that the fact that dogs don't come with clear lines of demarcation (do they mean the top of the elbow, or the calloused part underneath?) Not to mention that I have always thought of that as his shoulder, anyway, not his elbow -  but I digress. In any case, it quickly became clear that measuring the dog was going to be more of a challenge than the schematic artists had led me to believe.

I have to admit that I got a certain bitter satisfaction out of the fact  that, every time I told him to 'stop' he did exactly what I'd trained him to do since puppyhood, and sat down, so at least I felt like I'd succeeded in something.  But this, of course, prevented me from measuring him from the ground to the tip of his head in his 'natural stance,' and led to me trying to heave him up onto all fours because, while I've assiduously taught him to "sit" and "stay" and "lie down," I neglected to teach him to "stand up."


Now, heaving a 90-lb dog to a standing position is no easy task, especially since the dog naturally interprets this sort of action as an invitation to wrestle, which results in me shouting, "Stop!" which, of course, leads to the dog sitting down again.  After a certain amount of unladylike language (on my part) and a certain amount of wagging and sitting and wiggling (on the dog's part) I completed my task, scoured the online pet suppliers, and ascertained that we would be needing the Air Flight Carrier in Size XL, to the tune of $102.97, which has been duly ordered.  From my estimation, I would say that it is less than 1 inch larger in each direction than the present kennel, which doesn't seem like it will make much difference, but at least the airline will be appeased.

I suppose the consolation prize in all of this is that there is no doubt in my mind that the Yellow Dog will travel in great comfort and arrive safe and sound at his new home.  In fact, after all this, I have a sneaking suspicion that the amount of space the Yellow Dog will have while traveling to Canada is significantly higher than the amount of space that will be available to us during the 24-or-so hour flight to Seoul.  I'm willing to bet they don't even have a schematic for measuring people.

MsCaroline said…
No, thank God, or I would definitely lose my mind! He just needs a health certificate (dated no more than 10 days before the flight, mind you) and proof of rabies vaccination. That's just about all I can handle....
May 15, 2011 at 10:16 PM

Karen said…
Absolutely laughing my butt off!!! Sorry, but the mental picture of you measuring the dog, cursing and wrestling him all the while is too much. In a VERY cranky mood today for no good reason so this is a breath of air. Thanks for a good laugh! When I read your title I wasn't sure if I would be laughing or crying by the end. It's good to laugh! Again...hang in there!
May 15, 2011 at 10:23 PM

MsCaroline said…
Karen, so glad I was able to convey that scenario: that was what I was trying to do! At the time, I will admit I was not seeing the humor when it was happening, but later on I realized just how silly the whole thing must have looked. Pleased my little cussing/wrestling match helped the cranky mood!
May 15, 2011 at 11:00 PM

broken biro said…
Nicely written - very visual, very funny. Love the idea of the dog hosting dinner parties in 'Executive Dog Class' while you're scrunched up in your regulation 6 inches of 'Can't-even-Budget class' where you haven't space to bend down and pick up anyone's clothes off the floor, never mind lick your own... erm... never mind.
May 16, 2011 at 7:08 AM

MsCaroline said…
@BB: Thanks very much! You are quite correct: there will be no licking, although I don't think I'd be able to manage that even if I flew first class...not very flexible!
May 16, 2011 at 1:04 PM

Marion said…
Where were sons #1 and #2? Would have had visions of you holding front part, son # 1 or 2 holding back part up and remaining son measuring! Hah - could you imagine having to do this for Max (sigh) with his fear of tape measures?! Love reading your blog - it puts me right next door again. Hi to all both sides of the ocean.
May 16, 2011 at 1:27 PM

MsCaroline said…
They were both out, of course! And actually, I started out with one of the retractable measuring tape things from the workbench, but it was far too floppy and scared the dog to death(total sympathies to poor Maxie.) Had to switch to one of the rolled-up dressmaking types. So wish you were, indeed, back next door...
May 16, 2011 at 1:33 PM

Expat mum said…
Thanks for visiting my blog today.
I'm laughing at the sog measuring stuff. We flew our dog to Colorado for two weeks at Xmas and went through the same things. However, since we flew her on Pet Airways (don't you know) and they only do that route once a week, she then had to spend a night boarding, and since they didn't do the transporting, we also had to book a pet taxi. What a lot of work that was. (In case you think the dog's spoiled rotten - it all came out the same as the big airlines, without the added worry. Would highly recommend them.)
May 19, 2011 at 2:02 AM

MsCaroline said…
EM: I've been lurking around your blog for a while now, just never posted...very much enjoy it! Looked at PetAirways initially, but unfortunately they don't serve either San Antonio or Canada. Now that I've read your comment, I realize that it was truly for the best. If I had had to include arranging for boarding AND a pet taxi in that exercise, I would have been reduced to gibbering idiocy. I'm sure of it. Oh - and I completely got 'dog'. Not to worry!
May 19, 2011 at 4:00 AM

About Last Weekend said…
Hi there, love your blog, found you through Ex-pat Mum. yes after having four kids I had to make the rule, nothing else in the house that poops (Oh I did let in one fish but it died in two days). So afraid no dogs though I love them. Its amazing they have so many rules for dogs yet my seven year old who is the grubbiest creature alive is waved airily through every country.
May 20, 2011 at 5:00 AM

MsCaroline said…
ALW: Thanks very much - I'm still working out the kinks, but love blogging! I agree, the hygiene standard for small children is very low, but the beautiful thing is, they eventually *get* it. My 18-year-old son is now the cleanest human being on the planet, (which I never would have anticipated when he was smaller and consistently used his t-shirts for wiping his fingers while eating.) On the other hand, the dog - who is supposed to be 42 by the 'dog year' calculation - only yesterday rolled in his own poo. I think you've made a wise decision.
May 20, 2011 at 2:50 PM