Cabin Fever: In Which We Visit the National Museum of Korea 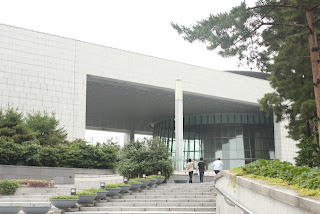 (It has been crudely pointed out mentioned that at least some of my readers may be interested in hearing a bit about Seoul and its sights, instead of just looking at photographs of my appliances and listening to me whine about how I have no furniture.  Therefore, despite that fact that I have never claimed to be a) a travel writer or b) a competent photographer, I am providing this description of a brief family outing the boys and I took a few days ago.  Let it be clear that I am far better at whining than I am at describing museums and points of interest, but in an attempt to keep everyone happy, here goes:)
So, after several days of being stuck inside in the rain, we got a brief dry spell Tuesday afternoon and the boys and I decided to make a quick trip to the National Museum of Korea.  Ordinarily, I would never head out to a museum at 2.30 in the afternoon for a 'quick trip,' but since a)  the museum is literally down the street from us (we walked there in about 10 minutes) and b) admission is free, I figured it couldn't hurt to take a short trip down to look around and come back later to spend more time if we wanted to.  (Not to mention that I felt I was starting to get that wide-eyed, demented facial expression that Jack Nicholson wore for most of The Shining,  and that I was beginning to notice a twitch in my right eyelid.) 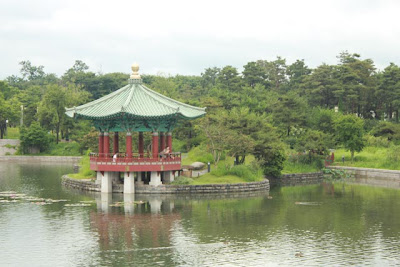 Although the museum is smack in the middle of Seoul and just a few hundred yards away from the street, it's been cleverly set in its landscape at the top of  a hill, and even features this charming pagoda on a man-made lake.  It is just slightly surreal to look at this pastoral scene and then realize that it's set right in the middle of a bunch of high-rises. 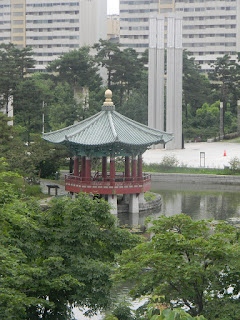 A lengthy  flight of stairs leads you up through the grounds to the museum proper, which is essentially composed of two enormous buildings connected by a large covered  area that includes bleacher-style stairs leading up to a view of Namsan Tower and which seemed to be a popular hangout for students. 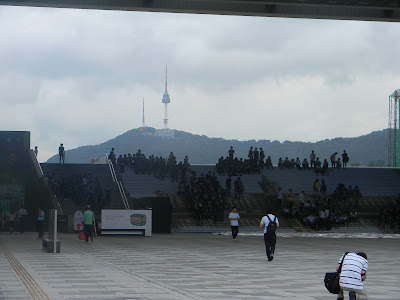 You can't tell because so many students were sitting on it when we arrived, but the bleacher steps (yes, that is a painting on steps) have been cleverly painted to advertise the traveling exhibit from the Victoria and Albert Museum.  I managed to take this on the way out, just as they were shooing everyone off  to do something to the display. ( I know, it's crazy, right? Steps!) 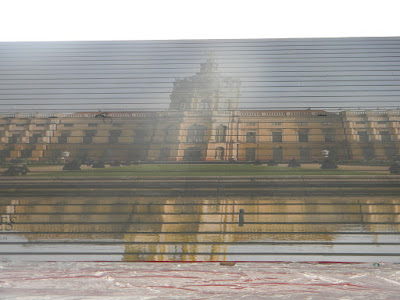 The building to the left (which we did not go into) houses traveling exhibits, a theater, and a children's museum.   The building to the right houses all the permanent exhibits, which display Korean artifacts from paleolithic times through the modern day. The museum itself is an enormous, imposing (one review actually said 'pompous') modern structure:  lots of glass, light, and interesting geometric lines throughout.  Son #1 spent a lot of time photographing the architecture. 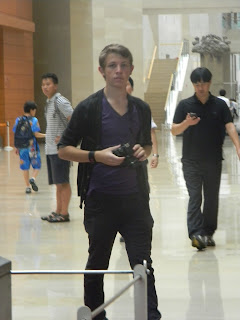 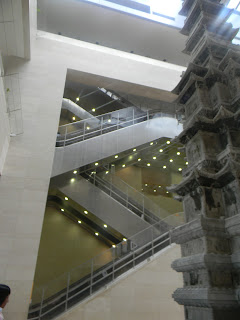 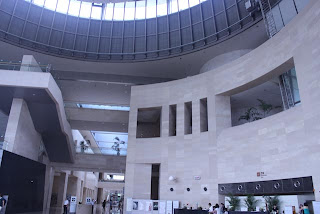 Since it really was just an exploratory trip, we opted out of purchasing an English audio tour headset and decided to wander around to get the lay of the land. Most of the displays had a helpful title in English ("The Beginning of Agriculture") and then a lengthy and informative description in Korean, which meant that we moved pretty quickly past each one.  We popped in and out of some of the displays, starting with Early Man (arrowheads, pottery fragments) and ending up in the Era of Cool Weapons ( daggers and arrowheads and spears), and that was just one side of the first level. At that point, we came out into the main corridor and decided to get some better photos of a 14th-century marble pagoda, which had been a Buddhist Shrine in what is now North Korea. 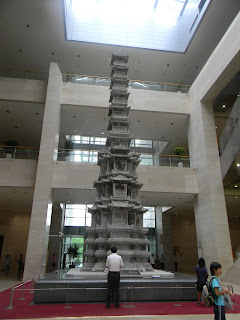 While we were doing this, we were approached by a gentleman who  turned out to be one of a group of  English-speaking docents who are stationed throughout the museum and whose specialty happened to be the section with the Buddhist relics and statues.  He ended up giving the 3 of us a private tour, explaining the various influences on Korean Buddhism over the years and weaving an enormous amount of world history into the whole presentation.  He spoke wonderful English and was very well informed on his subject. 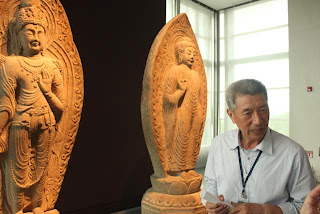 He ended up our tour by showing us the 5 great Buddha statues and explaining what their various hand gestures (mudras) symbolized (ie, healing, enlightenment, wisdom, etc.)  My favorite was the Teaching Buddha, who was displaying the vajra mudra,(mudra of knowledge, aka 'wisdom-fist'.) ( I was tempted to ask if there was a mudra of furniture (aka, the 'sofa-fist') but I was fairly sure there wouldn't be, or - worse yet - I would be directed to the 'patience mudra.'  So I kept quiet.) 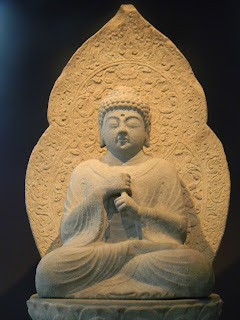 By the time our presentation was over, we had easily spent 2 hours in the museum and really just scratched the surface.  An afternoon well spent, and all three of us agreed that we'd be back, preferably on a day when it's not raining, just finished raining, or (as in this case) getting ready to rain again.

(If you're planning to visit Seoul, the National Museum can be reached by taking Line 4 to Ichon Station, Exit 2.  As you come out of the exit, the museum will be straight ahead on your left.  Admission is free for the permanent exhibits;  the traveling exhibits charge a fee.  Admission to the present exhibit, on loan from the Victoria and Albert Museum, costs 10,000 KRW.)

Trish said…
I've thoroughly enjoyed your appliance posts but have to say this was fab!
Those steps are incredible and interesting how in many of these contemporary museums it's the architecture of the buildings themselves that are just as noteworthy.
Your way of 'doing museums' is much like ours - anything over two hours and it's overload. Come back another day and discover something else.
July 14, 2011 at 2:25 PM

Karen said…
LOL....pompous!! What a great find, within walking distance and also free! You did a great job describing it and I want to bring my son (he of the great interest in Buddha) to see it. Notice I did not say he was interested in Buddhism...just the statues of Buddha! A great lead in to teach him a little about
Buddhism, though. I know very little myself but am very intrigued by the subject. Anyway...off to yet another slice of Americana...the ball game. Local AAA team the Pawtucket Red Sox. Should be fun. Then, this crazy mama agreed to drive the young'uns to the midnight showing of the new Harry Potter. And to drive back as well! Not sure what I was smoking when I agreed to that!

MsCaroline said…
@Trish: well, thank you for the encouragement. And yes, the beauty of the free museum down the street is definitely the option to leave when you get burned out!

@Karen: I didn't get a pompous feeling from it, but apparently - if one can get a 'pompous' vibe from architecture - this one has it; more than one review mentioned it! As far as Buddha goes, both my boys were really intrigued by the statues and the mudras, and I have no doubt yours would have been, too. They were, by far, some of the most interesting things we saw- probably because it's the first and only museum they've been to with such a huge collection of enormous Buddhas.
July 14, 2011 at 11:22 PM