Welcome to the Land of the Gadget 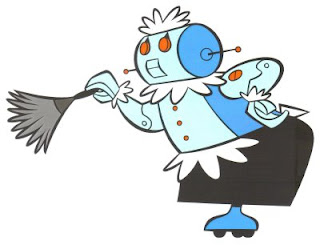 I know America is supposedly a land of creativity and innovation, but, after barely 2 weeks in Korea, all I can say is, it is clear to me that we're falling down on the job.  The level of technology and gadgetry that is infused into daily life here is absolutely amazing (and, by 'amazing,' I mean 'terrifying.')

Now, I consider myself to be a technologically competent person (Mr. Logical and Sons would probably strongly disagree, but it's not their blog now, is it?) By 'competent,' I mean, I can make purchases using a debit card;  I can download photos to FaceBook; and I can save a file to a flash drive from one computer and - voila! - open it on another one.  No, I can't reformat your hard drive or install a wireless router, but as far as interfacing with technology on a daily basis, I am not a complete Luddite.

But let me tell you, the amount of technology that saturates daily life here in Seoul is awe-inspiring.  Now, I will grant you that  that we are living in a relatively new and extremely high-tech high-rise apartment building, but it's not like we're in some sort of experimental lab.  We're surrounded by thousands of other people living exactly the same way, and they seem to take it all in stride.  However, I feel that they have an unfair advantage in that they speak Korean and I do not, so I look even more technologically challenged than I am.

"That MsCaroline exaggerates all the time!" I hear you thinking to yourself.  "One subway card and she's all, 'There's too much technology in this city!' "  Well, yes, swiping the subway card has taken a teeny bit of getting used to (only because I kept putting it safely back into my wallet and then back into my purse, which meant that, when I was being swept along in the tide of fast-moving Seoulites towards the turnstile, I would have to leap out of the human current and huddle behind the shoeshine stand to dig out the card, lest I cause a bottleneck at the exit by not having it instantly available.  I have solved this problem by keeping the card in my pocket, so there.)  But really;  the subway (t-money) card is just the tip of the iceberg.  For example, to enter our apartment building, we have a magnetic access card that we wave at a sensor to get the lobby doors to open. But once you're in the elevator, you can't just press your button and head up.  No, you have to wave your card again in order to press your button to get to your floor.  And once you're there, you key your personal code into the front door handle (which glows blue and looks like something from 2001:  A Space Odyssey.)  Once you're in, the pleasant disembodied voice (which the boys have named 'Sasha' - do not ask me why) welcomes me (at least I am assuming that's what she's doing) and - unnervingly - automatically locks the door behind me just like those doors in the SuperMax prisons.

But wait! There's more! In addition to the previously mentioned arse-blaster 9000 , there are sensor lights in the entryway which turn on automatically;  a 'home management center display' that is used to manage all the electronics in the home( but only if you know Korean, so I just use it as the doorbell;) and a drawer that (I think) is supposed to sanitize my cutting boards and metal chopsticks (my cutting boards are way too big to fit in there and I don't have any silverware OR chopsticks yet, so I just store Tupperware in there, but the important thing is that I have the technology.  Right?)

So, yeah, these are things we did not have in any of our typical American suburban family homes.  I know that there are some Americans who have this kind of technology in their homes, but not in the crowd that we run with.  The people we hang with use lowbrow technology like Blu-Ray players and gas grills and MacBooks and front-loading washing machines, not talking doors and home management center displays and toilets that offer you your choice of 'pulse' or 'massage.'  I mean, I thought I was doing pretty well in Texas because I had a warming drawer that could also function as a slow cooker, so you can see that I'm clearly out of my league.   And no, it's not like I'm going to produce a possum from under my overalls and butcher it right there in the immaculately tended bonsai-style garden in front of the building;  I'm just saying that all this technology
can be a little overwhelming, especially when most of the directions are in Korean.  And even when they do provide helpful little labels in English, it's still not always clear what you're supposed to be doing:


So, you see, I'm surrounded by technology.  Some of it I understand;  most of it, I don't.  We've all done a lot of random 'press-and-see' ing in the last few days, and I imagine will continue to do so in the days to come.  But when I get discouraged by the amount of technology facing me; when alarms go off and I don't know why;  when soapsuds overflow from the washing machine that will only hold 3 pairs of pants and a shirt in one load; when I am reduced to pressing every button on the device in a last desperate attempt to make it do something - anything; it is in that dark hour that I can walk over to the utility closet, open the door (partway), and gaze adoringly upon the one piece of technology in our apartment that I can use with complete confidence.  The machine that I understand- and that understands me.  The item that won Mr. Logical a zillion Husband points when he brilliantly thought to include it in the negotiations with our landlord;  the item that probably caused untold cussing and sweating for the workers who had to shoehorn it into the far-too small-space;  and the one item that has helped me to maintain my sanity thus far:

Karen said…
LMAO, Carolyne. Love the clothes dryer...I guessed before I even go there. I do remember buying my first house and being enraptured by my very own washer and dryer. Such a luxury! Glad you are settling in, and will soon have silverware, even if it is not the greatest. Day 3 of home for vacation here and I'm finally settling in after the camping trip. Might even get the kids over to the pool today! First 2 report cards are in and all is well...even Josh raised his grades and almost made honors. There is hope! Keep the stories coming...they are making my summer!
Karen
July 1, 2011 at 1:15 PM

MsCaroline said…
Karen, so glad you are recovering from camping and all's going well! After that trip, you deserve a bonus (please tell Neil I said so...). But yes, I am unashamedly happy about this dryer...it's the little things in life, isn't it?
July 1, 2011 at 2:20 PM

Trish said…
I'm getting to grips with new German kitchen appliances which beep at me every few minutes if I leave the doors open ( that's the Gestapo fridge beast) or they want to tell me what temperature it is. But thank god I have English instructions - this sounds a nightmare but very funny to read!

Wilma said…
I'm envious of your dryer--and even of your washer that only washes 3 shirts and a pair of pants. LOL Seriously, I love your stories. I'm with Karen--Keep 'em comin'. I can sure use the laughs.
July 2, 2011 at 12:13 AM

MsCaroline said…
Trish, our fridge does that, too(beeps when open too long.) It's one of the few features I appreciate, since it keeps the boys from standing in front of the open door, gloomily peering in and hoping that something interesting will magically appear. You are welcome to my sanitizer: I have nothing that will fit in it!
July 2, 2011 at 12:31 AM

MsCaroline said…
Wilma, if I were still in AZ, I don't think the dryer issue would bother me as much, since things dry so quickly there. However, since the humidity's so high here, everything's damp forever if you try to drip dry. However, trust me, I am appreciating my dryer!
July 2, 2011 at 12:35 AM

Wilma said…
I'm not allowed to hang stuff out on the balcony to dry and it takes forever in the house. When we lived at 6272 one of husband's first home improvements was to get rid of the clothesline. Too much dust here and the clothes get dirty hanging outside. LOL
July 2, 2011 at 9:39 AM

Wilma said…
Carolyne, Sean said to tell Cullen that he should try to translate Sasha's greeting with his iPhone translator app. Worth a try, maybe.
July 3, 2011 at 9:25 AM

MsCaroline said…
Good idea, but the translator only does writing, and she only talks...I'll have him check and see if there's an app that works for talking.
July 3, 2011 at 10:22 AM

Anonymous said…
I am cacking up! Love it...did you know you can make phone calls while riding the subway? I LOVED that, not that I ever did it, I just loved knowing it was possible! You need a Korean friend. My Korean friends saved me so much time... I'm going to leave my email on this entry. If you would like to email me I can hook you up with some friends I still have there. Sounds like you are embrasing life on the pennesuila...enjoy your time there!
July 10, 2011 at 3:36 PM

MsCaroline said…
Trish, I haven't made calls, but on long rides I do check my email or FaceBook or whatever...gotta love a country where you can still get cell phone signals underground! We had places in our neighborhood in TX where we couldn't get a signal!
We actually do have some Korean friends now, but I do hate to keep asking them questions...I don't think I am quite embracing life as much as you did, but I am giving it a good try! You do not know how many good ideas you have given me!
July 11, 2011 at 1:11 AM