Cabin Fever: In Which We Visit Gyeongbokgung Palace. In the Rain. 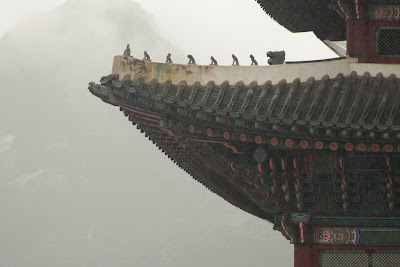 So, flushed with success and accolades (well, my aunt told me she liked it) from my first tentative venture into travel blogging after our visit to the museum on Tuesday,  I was ready to take on another challenge.  Therefore, when B and her visiting daughter, 'J', suggested a visit to Gyeongbokgung Palace here in Seoul, I jumped at the opportunity.  Never mind that the weather report had predicted virtually 100% chance of rain for the entire week;  we'd been in Seoul for a month;  it had been raining for most of that month, and, by God, a little rain was not going to stop us.  Besides, I reasoned, how many people would really want to go visit a palace on a rainy day? Since I loathe crowds, I even eagerly hoped we might have a chance (in perpetually-crowded Seoul) to actually see some of the palace with fewer than 7 or 8 thousand other people.  On top of that, I also reasoned that, rain or no rain, we would be inside the palace for most of the time anyway, so a little rain would be no problem.   Thus it was that, armed with our umbrellas and cameras, we headed out into the morning drizzle to the subway, bound for Gyeongbokgung Palace.

When we emerged from the subway 45 minutes later, we found a crowd of people huddled at the exit who were all grimly observing what had, during the course of our journey, become a torrential downpour, clearly hoping that it would cease - or at least slow down - which, of course, it did not.  Once it became clear that there was no respite in sight, we intrepidly popped open our umbrellas and marched out into the downpour and toward our fate.

Now, I was going to provide my readers with a virtual tour - you know, a  descriptive running commentary accompanied by stunning photography (admittedly, 98% of them taken by Son #1, who is very talented - and, equally importantly - has a much nicer camera than I do.)  My plan was to take my readers from place to place in the palace 'with' me, feeling as though they were on the tour with me.  However, that was not to be, mostly due to this: 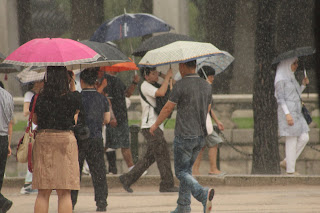 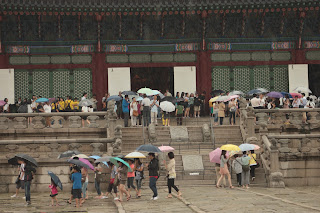 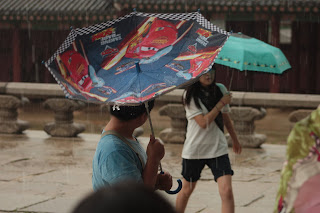 Yes, gentle reader, it rained, poured, stormed, gushed, and cascaded.  It did so ceaselessly, mercilessly, and torrentially, soaking our shoes, our clothes, and even our umbrellas to the extent that, as J pointed out, "It's raining in my umbrella."  Ultimately, it drove us to abandon the tour and agree that, since we live here, we could always return in more clement weather.  Our main concern was that B's visiting daughter J might be disappointed, but fortunately, J has seen more of Korea during her 2-week visit than most people see in their entire stay here, and was in complete agreement with this plan, providing she got the requisite photo taken with one of the historical re-enactors posted at the Grand Entrance Stairway, which was duly accomplished: 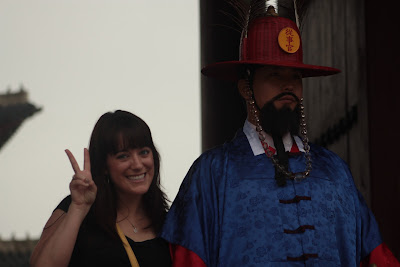 So, when it came right down to it, we saw several parts of the palace, palace grounds, and the Entry Gateway, which were all exactly what you would have expected and/or wanted to see as a tourist in Korea, although by no means did we see the entire complex.  We shared this experience with hundreds - maybe thousands - of other people, sloshing through courtyards, up stairs, through passageways, and around the charmingly tranquil - if somewhat rain-swollen - lake complete with its own pagoda, all while the rain continued to do its thing.  So, while I can't really provide you with a step-by-step virtual tour, what I can do is share with you with what we learned about going to a Korean Palace in the rain. 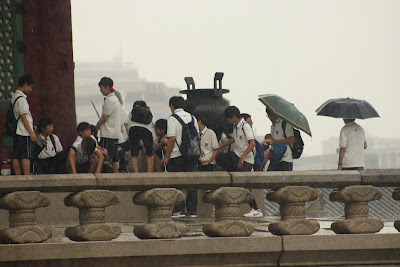 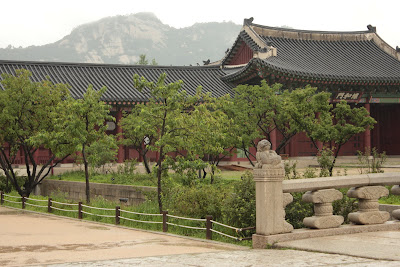 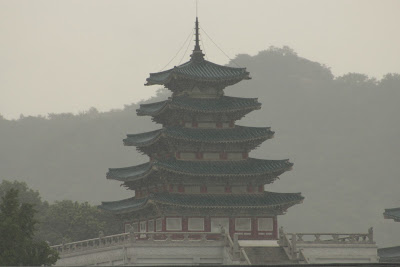 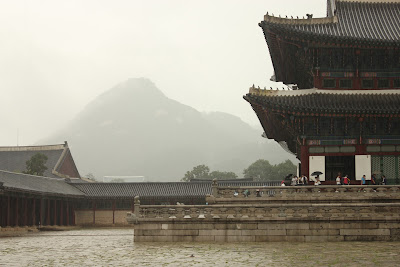 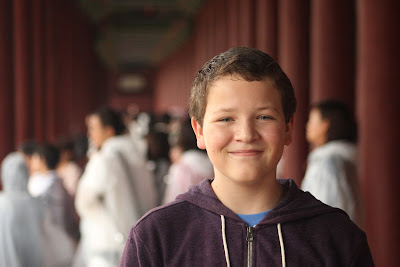 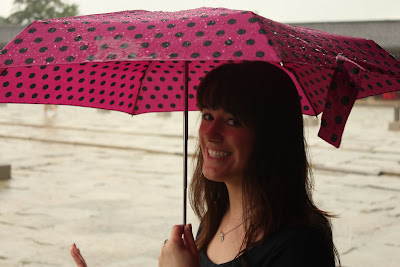 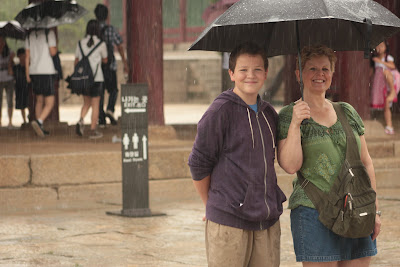 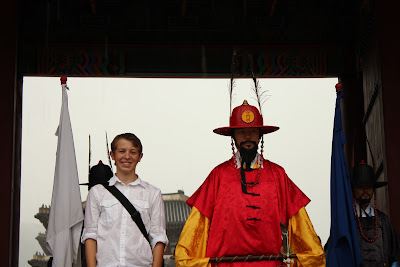 Wilma said…
Sounds like you had an interesting day. I am so fashion-UNconscious that I had to look up both types of shoes that you were talking about. Thanks for providing a link for the TOMS. LOL
July 17, 2011 at 11:24 AM

MsCaroline said…
The boys seem to be much more fashion-conscious than I am, so I learn a lot from them. As far as Keen's go, they make a lot of outdoor gear,which is made to withstand a certain amount of abuse. I doubt they are in the least bit stylish, especially since they're about 8 years old!
July 17, 2011 at 12:07 PM

Karen said…
Oh, good, Wilma didn't know what the shoes were either! I feel a bit better now. Loved the photos and descriptions of the tour, especially the shots of you and the boys...everyone DOES look like they are having a good time, despite the rain and gloom. Especially loved your description of the tour guide's "maybe" English descriptions and your attempts to derive meaning from her authoritative yet unintelligible speech!
Karen
July 17, 2011 at 4:26 PM

Elizabeth Musgrave said…
You really have the most fabulous writing style. I could not have imagined that I could be so entertained, amused and delighted by an account of a trip to a palace in Korea (about which I know nothing) in the rain (about which I know lots, I live in Wales remember!)
Truly fab. Hope you are over the worst of the furniture angst now?
July 17, 2011 at 7:33 PM

MsCaroline said…
@Karen: No one could understand her. In fact, I was the only one of our group who made any attempt to even try, which just meant that I suffered longer. Possibly TOMs are a TX thing, since Wilma didn't know either. Back in the day, we would have called them 'espadrilles' ; )

@J: Your mother is a wise, wise, woman. I am glad she is my friend.

@Elizabeth: Thank you! I always feel slightly guilty complaining about the rain when I know I have readers who deal with it on a much more regular basis - but for us, it truly is culture shock! The furniture comes tomorrow (5 weeks, but who's counting?) We are all so excited we cannot talk of anything else....

Karen said…
Yay...furniture is coming!!! I'm so excited for you! Was thinking after about the woman that nobody could understand and realized that this is my life. I never can tell what people are saying in such situations and have learned to sit back and not worry. Sometimes I do wonder if they are really speaking English. Good thing I read so much or I would have tremendous gaps in my education! Another sunny day here (sorry) spent by the pool with the fam (sisters, their families and Mom and Dad). Very relaxing as there was no food planned or to prepare. They all ordered sandwiches, we opted to go home and make tacos, due to too many unplanned nights out this past week. Broke the bank!

MsCaroline said…
Karen, I was desperately wishing for some lipreading skills, I assure you. Problem was more with her very unorthodox pronunciation, I think, so lipreading wouldn't have helped. I agree, reading does fill those gaps- i went home and found information online to fill in all I'd missed! Glad you enjoyed your sun - it's finally out today and promises to be a scorcher....hope the tacos were good - our 'broke the bank' meal is always vegetarian chili.
July 18, 2011 at 2:20 AM