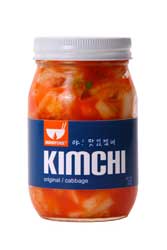 Today various members of my family are enjoying their Saturday out shopping and wandering the bustling (and sunny, it just figures) streets of Seoul.  I, however, am not, due to a mystery injury, which I am referring to by the clinical term, 'sore foot.'  I have no idea what's really wrong, but am guessing that I strained or sprained something yesterday when Son #2 and I hiked 3 or 4 miles (4.6-6.4 km) around Seoul, doing errands.  This may or may not have been my own fault for wearing my favorite Keen thongs, which, apparently do not provide quite as much support as I'd thought they did, even though I have successfully worn them before on long-ish treks without a problem.  So, the right foot is sore and achy and not lending itself to much more than being put up and iced or hobbling around the apartment today, which leaves me ample time for self-pity discussion of one of my new household appliances that a few readers have asked about:  the kimchi fridge.
To start with, it's helpful for everyone to know what kimchi is:  according to Wikipedia, it " is a traditional fermented Korean dish, made of vegetables with varied seasonings. Kimchi may also refer to unfermented vegetable dishes.[1][2][3] There are hundreds of varieties of kimchi, made with a main vegetable ingredient such as napa cabbage, radish, green onions or cucumber.[4] Kimchi is the most common banchan, or side dish, in Korean cuisine
Until I moved to Korea,( despite six years of my childhood spent in Asia and a father who enjoyed eating it,) my sole experience with kimchi was buying jars of it when Mr. Logical got a hankering for a taste of his childhood (also spent in Asia.)  The kind I bought was always the same, and was pretty much the only type readily available in the U.S.:  pickled cabbage in a jar, usually of a vivid orange hue.
Even when we ate in Korean restaurants, it wasn't clear to me that most of those little dishes they were bringing out fell under the umbrella term of 'kimchi.'  So I was a bit surprised to discover that there were literally hundreds of types of kimchi, (which I translate in my own mind as 'pickled stuff,' even though it's fermented, not pickled.)  As far as I can tell, if you can ferment it, it can be kimchi.  At traditional Korean restaurants, the first thing the waitress does is bring anywhere between four and ten small bowls and plates of various kimchi, which everyone nibbles at both as an appetizer before the meal as well as a complement to the meal itself. We're not always clear on what it is we're eating, but most of the time we just go ahead and eat it, although occasionally we'll indulge in a little game of 'whaddaya think this is?'


Anyway, the point is, there are numerous types of kimchi to be found in the typical Korean household, and now that I understand just how many types of kimchi there are, the fact that my apartment came furnished with a 'kimchi fridge' makes lots more sense.  Of course, when we first moved in and I saw the thing, all I could think was, 'Just how much pickled cabbage do you need?'


And I was even more puzzled when I opened it up and discovered that, instead of just being a big empty chest (which is sort of what it looks like), it is actually subdivided into several compartments, including a pull-out drawer that even comes with its own thoughtfully provided scoop. 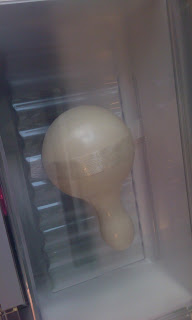 Furthermore, two of these compartments were full of big Tupperware containers that had clearly been made specifically to fit precisely within the alloted space and to store a whole lot of different kinds of something.  When I opened up my kimchi fridge for the first time, I found no fewer than 5 large Tupperware containers, all of them (presumably) waiting to be filled with MsCaroline's homemade kimchi. 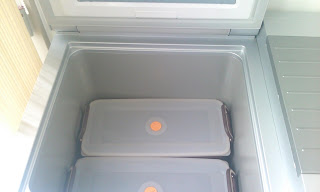 Now, some of you may be asking, 'But why a fridge devoted solely to the storage of kimchi? Why not just put it in the refrigerator in its Tupperware, along with the leftovers and the grape jelly?'


I will tell you why.


First of all, it is clear from the size of these containers that the amount of kimchi used by a typical family is far more than can be stored in your average fridge if you're still planning to have room for milk and butter and that grape jelly.  Secondly,(and this is just my opinion, but it is based on personal experience) if you have ever smelled kimchi, you will understand why- delicious as most of it is - segregating it from the other food is a practical move.  You will also understand why the fridge itself lives out in the utility cubicle (although I don't really get why it's so close to the washing machine, which seems like a self-defeating action) and also why it has a built in deodorizer. 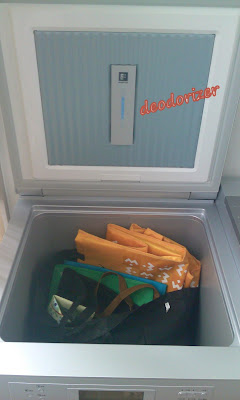 Needless to say, it was understood from the get-go that I wouldn't be using the appliance to store large amounts of kimchi, no matter how enthusiastically I eat it at the restaurants.  So, what do you do with a kimchi fridge?  At the moment, the blender lives on top of it (of course we packed our blender in our air freight.  How else do you make margaritas?) as does any other random thing I can't find space for in the kitchen. Since I have two other refrigerators (don't ask), I don't need it to keep anything cold, so it's purely a storage spot.  I'm sure that, once our household goods get here, I'll have all kinds of desperate uses for it, but for the moment, it's doing a nice job of holding my reusable shopping bags and Mr. Logical's insulated water bottles for cycling. 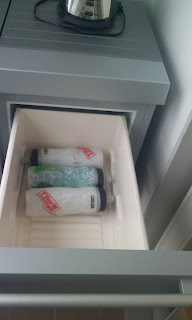 And of course, the big bottom drawer has really been put to the best use of all: 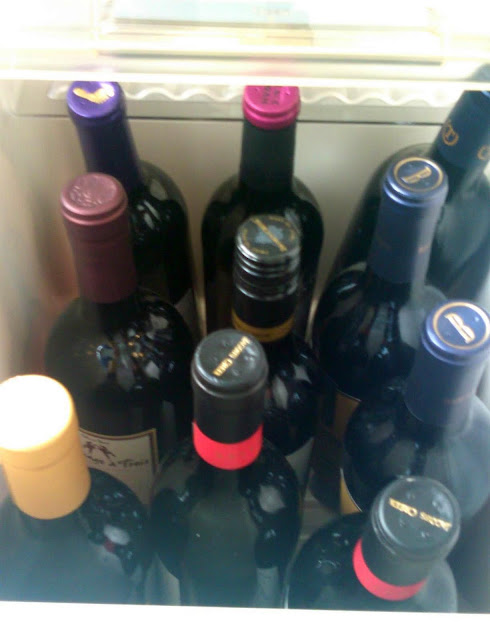 Almost American said…
Wow - a kimchi fridge? I had no idea!

nappy valley girl said…
I've had kimchi once - in a Korean restaurant in Hong Kong - and absolutely hated it, so I think I'd have a major problem living in Korea.....mind you, maybe I had the wrong kind?
July 9, 2011 at 5:59 PM

MsCaroline said…
@AA - you don't know how deeply I wish I had also come to that conclusion before I took my lengthy hike...

@NVG - I have always loathed Kimchi and in fact, resisted buying it for MrL. I still don't care for the orange cabbage stuff, but I have tried a lot of others now and have a few that I enjoy, as long as they are eaten in conjunction with the meats they grill at your table. I doubt I will ever go out and buy it, though. Thank goodness there are so many other types of restaurants in Seoul...
July 9, 2011 at 11:58 PM

Karen said…
Of course you packed the blender in the air freight...I wouldn't have expected any different! Given your circumstances, drinking heavily is necessary and how do you do that without a blender? It is at least as necessary as video games and loud music. I knew that you were thinking when packing, after all. For a taste of Americana for you...Neil spent the day ripping out the sandbox (no more babies..sniff), filling the resultant hole from a pile of dirt thoughtfully deposited by our local "dirt buying place" on our driveway and smoothing it out. This evening we bought a fire bowl (at Walmart) and some firewood. Tomorrow we have a fire in our backyard and make smores. Life is good!
July 10, 2011 at 2:01 AM

MsCaroline said…
Yes indeed, Karen, the blender and the wine, and the beer -well you get the idea - have figured prominently lately, although it turns out that all the walking doesn't seem to balance it out. And I can't even blame the tight clothes on my dryer shrinking things...sigh. While I am not missing any of the yardwork, I have been missing having a little patch of 'outside' to call my own...enjoy the firebowl, I am aleady conjuring up the image (and the good smells of woodsmoke and smores) of you all gathered around it!
July 10, 2011 at 3:17 AM

Trish said…
Sorry about your 'sore foot' - it could be plantar fasciitis? Probably not but it's a term I've heard of and sounds like it requires a lie down with one of those bottles in your kimchi fridge.
July 11, 2011 at 10:35 AM

Barbara said…
Hi, Ms. Caroline, so it's you that signs into my Tanzania blog from South Korea. I had been thinking it was an old law school classmate of mine who now lives there, but was kind of surprised about that, because he's kind of self-centered and mostly posts Facebook pictures of cute Korean girls that he sees and gory injuries he causes to himself on his motorcycle. So it makes more sense that maybe it was you! I just read your last 2 posts and am still laughing, so definitely have to add you to my reader!
July 12, 2011 at 12:39 AM

MsCaroline said…
Well, in all fairness, since I just got to Seoul, it may have been him, although it doesn't seem like your blog really speaks to his particular interests...; )I usually read you in my Google Reader, so I don't know if that shows up in your stats. It would have been San Antonio, TX before. I really enjoy your blog's 'voice' and am violently jealous of your photography skills...that's something I am planning to work on. The last few weeks I've been using my iPhone, simply because I packed my camera's battery charger in the sea shipment, and cannot charge the battery until it arrives, which should be somewhere in the next two weeks or so. Thanks for the comment, will be looking forward to hearing about your National Park adventures!
July 12, 2011 at 12:57 AM