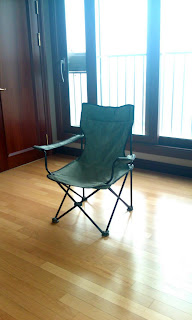 Continuing on with our series, "The Glamorous Lifestyle of the Expatriate Family," you will recall, in our last installment we discussed air freight and sea shipments.  Air freight, of course, is the small shipment that you* thoughtfully packed in order to get you through until the sea shipment arrives.  Until then, you are - as my title suggests - camping.  But camping with running water, electricity, and household appliances.  And, in my case, a TV and an Xbox.  We've put away all the pots and pans, stocked up (a bit) on groceries, and come up with some simple but necessary arrangements to get us through until July 14th (or the 21st, but I would appreciate it if those of you who are so inclined would pray for the 14th) when the sea shipment arrives.

Mr. Logical and the boys have quickly gotten the living room set up ideally for ultimate father-son bonding: 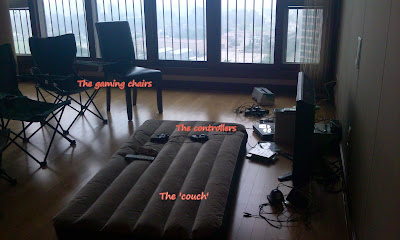 When they're all gathered together in the glow of the flickering screen, stalking each other around some post-apocalyptic city ruin while armed with improbably enormous futuristic weapons and committing acts of unspeakable violence,  it's a heartwarming sight.  However - I know, call me a party pooper - what I'm really interested in is some trash cans and an ironing board.

"But MsCaroline," you are saying, "Why don't you just trot yourself out to the local E-Mart and buy yourself some trash cans?"

I'll tell you why:  because at this moment, somewhere in the Pacific ocean, a shipping container holding the Asia Vu family belongings in it is floating along, chock full of trash cans, recycling bins, ironing boards (ok, just one ironing board), clothes hangers, silverware, pillows, and a number of other household goods that I never fully appreciated when I had them at my disposal 24 hours a day.  And if I go out and buy some trash cans now, when that sea shipment arrives, we will be up to our ears in them.  Besides:  I'm cheap thrifty.  So there's the dilemma:  I really need these items in daily life, but I don't want to go out and buy them because I know they're on the way.  So, I am stubbornly refusing to go out and buy any.   In the meantime, however, living without them is extremely challenging.  What someone really needs to do is come up with a rental business for expatriate wives who are still on the learning curve.

You may ask why I am harping on about the trash cans.  Well, I'll tell you:  trash cans and recycling bins are something you never fully appreciate until your trash and recycling are lying about in random piles on the kitchen counter and the floor in spineless plastic shopping bags, spilling their contents every which way and causing you to wish that you could return to the evil days of the 1970s when no one except hippies knew about recycling and everything could be put in the trash with a clear conscience.  Even worse, there is no way to label anything, and, while I - as the only  person who is interested in keeping order in the kitchen - have a clear system (in my head) of what is what and where it belongs, my family does not, which leads to some pretty hilarious (by 'hilarious' I mean 'hostile') exchanges, wherein I grab an unmarked bag containing an empty plastic bottle, one soiled paper towel, and an empty wine bottle, and announce heatedly that this bag is for plastic only, not glass, and trash obviously goes over there in the small beige bin.  After this, everyone nods and goes right back to whatever they were doing before, only to repeat the entire scenario moments later, this time with a different bag containing a granola bar wrapper and an empty can. I'm determined, though, to spend some time brainstorming today and come up with a workable solution that will get us through until the shipment gets here.  I did, after all, remember to bring a lot of Tupperware;  you can always work with Tupperware.


*I did not.
Email Post
Labels: air freight moving to Seoul recycling

Karen F. said…
So...you are camping after all! I hope YOU don't get a migraine. I am so with you on not buying when perfectly good is on the way. Sounds like something I would do and your family sounds just like mine in their reaction to finding the correct bag. How hard can it be to look inside and match what you see? Of course, my family members can't find anything that doesn't leap up and bite them when they decide to go looking. I have decided that half my life is spent looking for other people's things while the other half is spent "straightening up," which amounts to picking up other people's things.
Fourth of July morning...all kids are asleep and quiet reigns. Have a good day...or night as the case may be!

MsCaroline said…
No migraines here, thank goodness. The air mattress is not conducive to much rest, trust me....I finally found empty boxes and taped actual labels on them, although it's anyone's guess as to whether they'll be observed. Glad you understand about the not buying new when others are on the way. I know I will be frantic looking for space when our stuff gets here as it is and I hate to think what we will end up having to get rid of anyway without even buying anything! I'm exactly with you on the looking and the straightening, too! Very weird 4th of July, work as normal for Mr. L and me continuing to try and create order in the household with minimal supplies...9 days to go until the 14th!!!
July 4, 2011 at 2:11 PM

Wilma said…
I understand it too. We don't sort ours though. We did when we were at 6272 but here they don't have recycling. It wasn't a big sort though--just recycle and trash. No separating the recycle.

Karen, it is a joke in this house that mom is the only one who can find stuff because none of it has flashing lights on it and that's the only way they can find it. LOL
July 6, 2011 at 8:10 AM

MsCaroline said…
Ha, at my house the reason that I can find things is chalked up to my uterus (since I'm the only one here who has one.) However, I don't think that can be it, or moms of girls would not have the same problem....I think it's just a mom thing...
July 6, 2011 at 11:28 PM