In Search of the Elusive Cherry Blossom

If you've been reading my blog for any time at all, you know that I've suffered loudly and whinily through my first winter in Seoul and am still waiting impatiently for the Spring.

Supposedly*, Spring usually arrives in Seoul at the beginning of April, but (naturally) it's late this year.  In fact, a cherry blossom festival was held the first weekend in April, but I didn't bother to check it out, since even I could see that there was no way there could possibly be enough cherry blossoms to festivate over.  However, last weekend came on the heels of 5 days of relatively warm temperatures, and after hearing from my friend A about the 'Spring Flower Festival' on the Island of Yeouido not far from us in the Han River, we did a little research and learned that Yeouido was the area in Seoul most often listed as having the prettiest views of cherry blossoms. The hot blossom-spotting zone in Yeouido is a 5.7-km stretch called the 'Cherry Blossom Tunnel' ( it's lined on both sides with flowering cherry trees.)

I am all about Cherry Blossom Tunnels, so I put this spot as #1 on our day's agenda and added to it - just in case the blossoms weren't out yet in Yeouido - a stop at Cheonggyeonggung Palace, which was also noted as a good spot for cherry blossom sightings.

And so it was that we* set out to see the cherry blossoms in Yeouido, about a 30-minute subway ride away.

We didn't know exactly where we were going, but (rightly) assumed that, once we got out of the subway, we could simply follow the crowds who would be flocking to see the sights.  (Fact of Life in Seoul:  if there is something worth seeing, you will be seeing it along with at least a million other people.) We climbed out of the subway station and headed down the street with the crowd toward the park and those Spring Blossoms.

Once we got closer to the park, it was clear that there was, indeed, a festival of some sort going on, based on the number of food stands lining the sidewalks.  People were everywhere, munching on roasted silkworm pupae (a popular snack), and waffles (the waffle - oddly enough - is one of the most popular foods in Seoul, both at restaurants and food stands), crowding the sidewalks, riding their bicycles, and stopping to have their photos taken.  Although there were a few blossoming cherry trees here and there, we saw nothing even vaguely resembling a 'tunnel.'  Hoping we'd just not gotten to it yet, we hiked another kilometer or two along the river, but it eventually became apparent that the few trees we'd seen in full or partial bloom were about all we were going to get.  This explained why there were dozens of photograph-takers crowding under and around each of the few blossoming trees we saw.

MrLogical and I were somewhat disappointed, as you can imagine, but even a partially- flowering cherry tree in Korea is still something, so we elbowed our way in amongst all the other tourists grappling around the few  blossoming trees and dutifully recorded the experience. 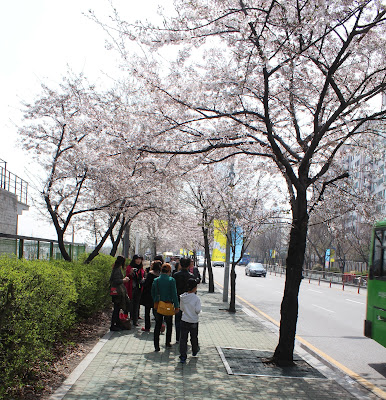 Having determined that the famed 'tunnel' was not going to happen, we turned around and, undaunted, trekked back to the subway with the intention of heading north, back across the river, to Cherry Blossom Sighting Spot #2 on our agenda:  Changgyeonggung Palace.

We had been to two other palaces in Seoul already, but not Changyeonggung.  Athough all of the palaces are beautifully landscaped, Changgyeonggung boasts extensive parklike grounds, including a man-made lake, and we reasoned that, even if the cherry blossoms weren't out (which was, by that time, looking like a distinct possibility), it would be lovely to see the palace and the other flowering shrubs anyway.

The walk from the subway station to the palace took about 20 minutes through some interesting little shopping areas, one of which featured this statue outside the building:

The palace itself is located right down the street from the Seoul National Science Museum and is surrounded by an enormous wall, over which you could see the tops of trees and shrubs - some of them flowering.  We were encouraged.

We paid our KRW1000 (about $1 US) and entered the courtyard, where we were greeted by the sight of a few newly-flowering cherry trees planted along a small canal running through the center of the courtyard: 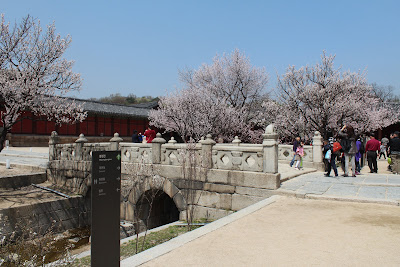 Once again, the only blossoming trees were surrounded by the other optimists who'd all gotten up early and dragged themselves out to see cherry blossoms and -dammit - they were going to get pictures.  As it turned out, this small group of cherry trees was probably the 'bloomiest' group we saw at the palace.  There were a few scattered about the rest of the grounds, but most of the trees were apparently playing it safe after the brutal winter and were going about blooming in a slow and cautious way.  Here and there we found trees - usually in sheltered spots near walls - that were in full bloom, but they were definitely the exception. 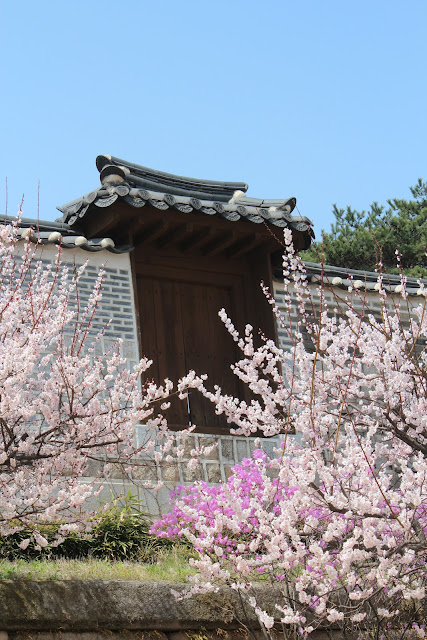 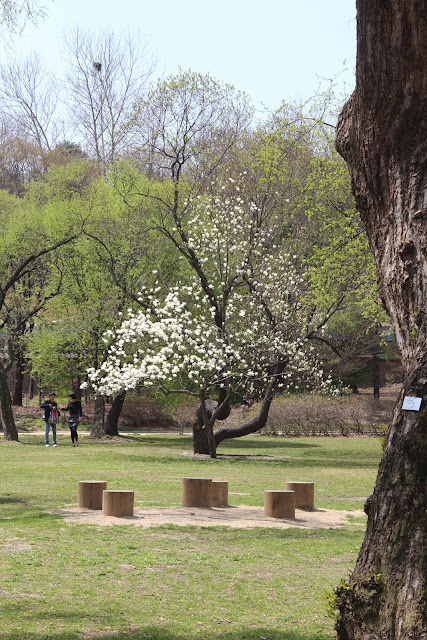 After hiking all around the palace and parkland, MrL and I - by now, tired and a little discouraged - decided to call it a day and headed home.  At this point, we'd walked several miles and spent hours on crowded subway cars, and we still had grocery shopping waiting for us in the afternoon. We were cheered by the fact that certainly next weekend would be really gorgeous, and at least we now knew exactly where to go (aren't we the optimists?)

We got home, jettisoned cameras, collected the reusable grocery bags, and headed back out - this time in the car - to do our shopping, and got the biggest surprise of the day:

There, on a road leading onto the Yongsan Army Garrison, 5 minutes away from our home, we found what we'd spent the morning looking for all over the city:  cherry trees.  In full bloom.  Dozens of them.

*Just between us, I have my doubts.
*Just the two of us:  Son#2 had to stay home and work on a science project relating to coronary artery disease but assured us that he would have loved to have gone with us if he'd not been so busy.
Email Post
Labels: Cherry blossoms Springtime in Seoul

Trish said…
This post reminds me of a poem by AE Housman which I studied at school. The first line is 'Loveliest of trees, the cherry now' and I can still recall every word of it. It's all about making the most of our time on this earth as the poet counts down how many springs he has left to see the cherry trees in bloom.
(that was a bit cultured for me, heavens I need a lie down now!)
April 16, 2012 at 11:47 AM

Karen said…
I did enjoy your "phone" picture just the same! Hope Son#2 got all his coronary artery project done...I can understand why he was too busy to tag along, coronary artery disease is serious business! Glad spring is slowly arriving...here spring is early, trees are in bud and some even in leaves already. That is usually an early to mid May thing. A warm and dry winter and also dry spring. Brush fires are a problem in New England, not a usual spring thing!
April 18, 2012 at 12:07 AM

Stacy Rushton said…
Great post! I already left you a rambling response to your lovely comment over on my blog so I'll just tell you that I have signed up to get your posts by email.

Looking forward to following your adventures!

MsCaroline said…
Karen- I've heard how hot it's been in NE this year...he finished the project, although I don't know that it was an effort worthy of an entire morning missing the grandeur of semi-flowering Seoul! ; )
April 18, 2012 at 10:10 PM

BavarianSojourn said…
How beautiful! I love all the pictures, I love the fact that you trekked to find them and I love how the best ones were on your doorstep all along! Typical!! :)
April 22, 2012 at 7:43 AM