Signs of Spring: In Which Spring Seems to be Coming to Seoul

"The first day of spring was once the time for taking the young virgins into the fields, there in dalliance to set an example in fertility for nature to follow.  Now we just set the clocks an hour ahead and change the oil in the crankcase."  ~E.B. White


Who knew that E.B. White - of all people! - could write such risque`stuff? Certainly not I.  My whole acquaintaince with White was based on Stuart Little and Charlotte's Web, which contained not a breath of impropriety ( unless you count the fact that Charlotte produced something like a thousand offspring without the benefit of matrimony, which doesn't mean a thing today but - back in the 60s - was still frowned upon. However - as always - I digress.)

The point that White seems to be making here is that Spring used to be a lot more fun (at least for the young virgins) than it is nowadays, and also that no one really uses the word 'crankcase' in conversation anymore.  Also, we do not set our clocks ahead or back in South Korea, which makes calculating the time differences to the U.S. even more complex than it already was.

I had every intention of plastering this post with the roseate hues of cherry blossoms, but, as it turns out, the cherry blossoms still haven't actually gotten around to blooming much yet, so this is all I have: 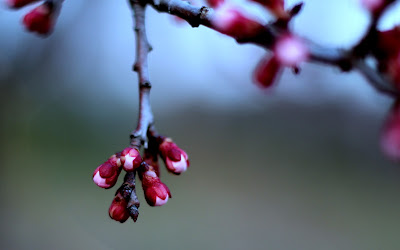 This is a pink cherry blossom in its pre-blooming stage, and they're everywhere in Seoul.  I've been watching them like a hawk, but mostly, they are staying stubbornly closed.  There are a few trees here and there with  blossoms that have been doing their thing, but I can tell that -as a group - they are just waiting for me to get distracted and stop watching them, at which time all of them will burst into roseate grandeur and then fade away before I see them.  At least that's what I'm afraid of, since I've been very distracted lately.

But let it not be said that MsCaroline neglects her readers, no matter how distracted she may be, and, as such, I will dutifully bring you up to date with what has been going on in my fascinating life:

Wilma said…
It's getting closer. Soon they will bloom and it will truly be spring for you. My condolences on the Costco visit. Not a fan of the place myself. LOL As far as the squinting--sunglasses, my friend. *grin* Glad to hear things are going well, except for the food extravaganza at the school. You'll have to let us know how that goes.
April 12, 2012 at 6:23 AM

Trish said…
Catering for 75 people!!?? Pre-Spring has obviously addled your brain, woman!
Costco - my mother loves to shop there in the UK. However she lives on her own now so is the only woman I know who has two fridges and two freezers using far too much electricity but somehow she believes it's worth it buying whole salmons and catering packs of chicken breasts.

MsCaroline said…
Wilma- yes, I am ready for it! I had sunglasses in my purse but hadn't taken them out when the photo was taken. The food extravaganza - God knows what I was thinking. I'll probably have a nervous breakdown before it's all over.
April 12, 2012 at 10:14 AM

MsCaroline said…
Trish - I know, I know. What was I thinking? I'm known for doing this sort of thing - biting off more than I can chew and then deeply regretting it.
I had no idea that there was Costco in the UK, but if it's in Seoul, it must be everywhere else, too. I just loathe the crowds too much to appreciate it, I suppose.
I loved Charlotte's Web, too. I've read it again a few times as an adult and I love E.B. White's dry, understated sense of humor more every time I read it. I just wish it didn't make me weepy at the end.
April 12, 2012 at 10:29 AM

Karen said…
I feel great pity about the food extravaganza...I would be sooooo miserable. Hated organizing events when I was with the PTA and avoid it like the plague now! I hate deadlines, probably because I believe firmly that I need to meet them. Bleagh! In less than 24 hours I will have a week off and am dying to get there!!
April 13, 2012 at 2:13 AM

MsCaroline said…
Karen - this was one of those things I did and immediately regretted, but it's too late. I was feeling guilty because I only work 15 hours a week and surely have ample time to take on a few extra duties for the sake of my child's school...right? Sigh. I have 7 meals to organize x 75 people..groan. Tomorrow's the first lunch. Hoping to pull it off...thankfully teenagers aren't that picky about what they eat...
April 13, 2012 at 2:31 AM

MsCaroline said…
Circles - Thanks! Made it through Meal #1 out of the 7 I am responsible for. Several lovely parents stepped in and gave me tons of help, otherwise I'd probably still be there in the cafeteria, huddled under a table!
April 14, 2012 at 9:48 AM

MsCaroline said…
Emma - One meal down, six to go! We fed all of them yesterday without too much trauma, so maybe it will work out better than I anticipate. Trust me, though: next year I will NOT be doing it! ; )
April 14, 2012 at 11:43 PM