Yes, it's April 1st, and I'm going to go out on a limb and say that I think it is finally really getting to be Spring.  The fact that it has taken until (nearly) April 1st still amazes me, because I have never lived anywhere where it took so long for the world to warm up and get moving as it has here.  Up until 2 weeks ago, there were practically no signs visible to the naked eye that there ever would be Spring, let alone in two weeks.  However, in the last 2 weeks, apparently all growing things have decided to get serious, and most of the plants you see are covered with signs of imminent activity, if they're not already beginning to bloom, although we still have quite a way to go.

According to those people in the know, Spring is the most beautiful time of the year in Seoul, especially when the cherry blossoms are out.  The down side of this (or so I've heard) is that the period of bloom is quite brief, so you have to get out and enjoy them before they fade.  This should be no problem for me, since I've been minutely examining nearly every branch or twig that I pass for the last month or so, looking for signs of life.  It's highly unlikely that 2 weeks' worth of blooming cherry trees will be able to escape my notice.
On a side note, this is the first time in 22 (23?) years that I have lived in a dwelling that did not have its own patch of land - garden, yard, border, whatever - and it's been extremely strange for me to watch Spring arrive in parks and on city sidewalks instead of my own bit of earth.  When we were first married and living in the Midwest, I spent the darkest parts of winter drooling over seed and plant catalogues, which I kept in piles on my nightstand.  Around the first of February, it was not unusual to find me on my hands and knees, scrabbling in the snow behind an old stone bench on the east side of the house where I knew the bright sun and the sheltered aspect provided a perfect environment for the earliest crocus.  Once I saw those first bright-green blades, I knew it was just a matter of time.
Of course, now that I have no plants and trees of my own, I've transferred all of my interest to my favorite greenspace:  the grounds of the National Museum of Korea and the adjacent Yongsan Family Park, which really deserve an entire post of their own, but which will have to wait.  Suffice it to say that there are enough plants and trees to satisfy even me, and that watching them come to life this spring has almost (but not quite) made it worth slogging through the long winter.
Accordingly, when I woke up on Saturday and noted that it was:  a) not raining and:  b) above 9C/48F, I knew it was a perfect day for a walk, and convinced MrLogical to come with me.  This was not too difficult, since he'd just gotten a new 50mm lens for our camera and was eager to try it out, although - as he pointed out - he really needed another lens to take really good close-ups of the blossoms.  Despite this handicap, he managed to get several good shots, which is how he entertained himself while I mooned around in the underbrush, fondling branches and exclaiming over tiny new leaves.
It was an encouraging walk:  the trees with the bright yellow Dr. Seuss-like blooms are all flowering, and all of the azalea bushes are covered with buds, many of them still tight and green:

but many showing signs of promise: 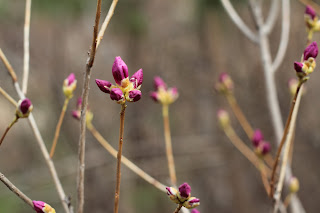 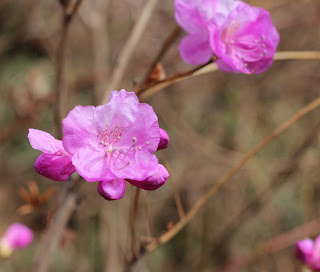 Here and there, in a sheltered spot like this one, we saw a whole bush in bloom, but that was definitely the exception rather than the rule, as you can see from the bare branches in the background: 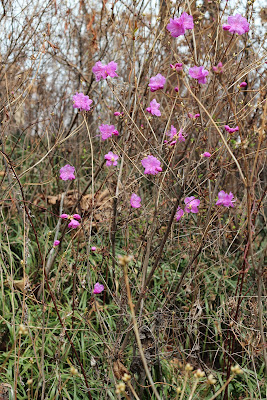 Tucked in among the azaleas, otherwise bare twigs were dotted with these tiny, so-pale-pink-they-were-nearly-white blossoms: 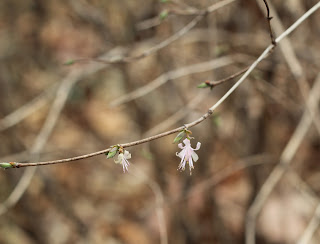 We saw some hyacinth-y looking things in beds: 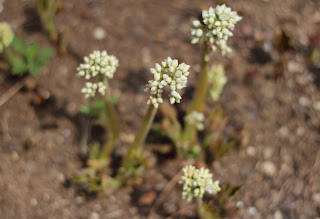 The buds of spirea, looking like emerald beads on a brown cord: 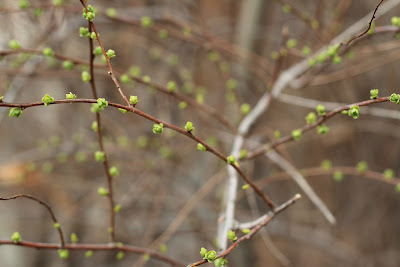 We even stumbled across one of the wild rabbits that live in the park, which - with their brilliant white coats and dramatic black eyes and ears - look all the world like an exotic pet and nothing like the slender, scrappy light-brown wild variety that we have in the U.S. 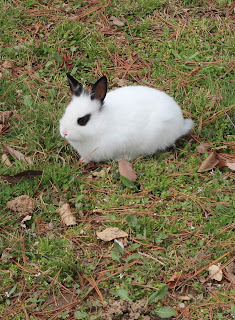 The first time I saw one of these little guys on the grounds outside of my apartment building, I was convinced that he was a pet who'd escaped.  In fact, there are a number of these rabbits living in and around the park, where they apparently live quite comfortably with few natural predators and a nearly constant stream of doting humans galumphing through their territory.  This particular fellow, after alertly examining us,satisfied himself that we were not a threat to his well-being, and went back to grazing on the new grass while MrLogical stood about a foot away and snapped a few photos. 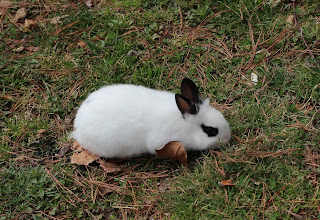 After an hour or so, the wind started (of course) to get cold again, so we headed back towards home, stumbling across a wonderful surprise as we walked: 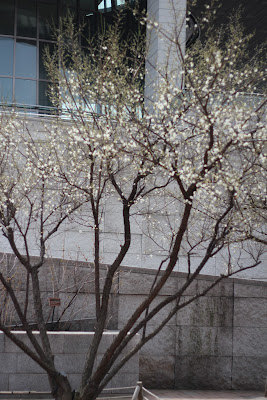 Tucked away in a picnic area directly behind the museum, sheltered from the wind, and warmed by the heat of the sun reflecting off the concrete, a single cherry tree had already begun to bloom while most of the others hadn't even started.  I looked at all the other bare trees around me and tried to imagine them all blooming like this one, and I could almost - but not quite - picture it. 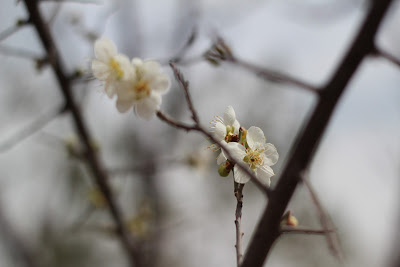 Wilma said…
Beautiful!! I'm glad you're finally getting your spring. I probably shouldn't depress you like this but we went swimming for the first time today. Photos on FB just in case you think I'm April-Fooling you. :)
April 1, 2012 at 4:11 AM

It's funny how when you don't have a real garden of your own you adopt the nearest public green space isn't it? When we lived in London we had the smallest patio garden ever, but the biggest greenest park at the end of the road. That was our garden!

Unknown said…
Wow! It's going to be gorgeous very soon there! Looking forward to seeing more pictures.
April 1, 2012 at 4:04 PM

MsCaroline said…
Wilma - yes, I saw those photos on FaceBook! I'm so happy to see signs of Spring coming, I'm not even jealous that it's warm enough there to swim!
April 2, 2012 at 12:18 AM

Trish said…
Ah doesn't that make you feel good, seeing all those blossoms peeping out. And those bunnies!! They do look like escaped pets.

I have decided I would like a magnolia tree. They are my favourite tree at this time of year. I see one in my neighbour's garden and just adore it. So that's made my mind up. Will buy one!
April 2, 2012 at 9:30 PM

MsCaroline said…
Trish - I love magnolias, too, although I always think of the Deep South (in the US at least) when I see them. Had no idea they grew in the UK, but obviously they do. Looking forward to seeing the photos after you plant it!
April 2, 2012 at 11:25 PM