Most of my readers are probably aware of the fact that things have been a little tense lately between our northern neighbor (North Korea) and, oh, pretty much everyone else in the world.  For those of you who have been living under a rock  too busy to watch or read the news, I will sum up the situation in simple terms:    North Korea is getting ready to launch a rocket into orbit and this is Bad.

According to Pyongyang, this rocket will be carrying a peaceful weather satellite and is part of the development of a peaceful space program.  In the opinion of many other countries (like, all of them), though, this rocket launch is a violation of about a kazillion treaties and nuclear accords, and just so happens to be exactly the same kind of rocket that would also be used to carry a long-range ballistic missile.  Coincidence? MsCaroline would like to think so, but she doubts it.

Virtually all of the governments of the developed world think this rocket-launching thing is a bad idea and have told North Korea not to do it Or Else.  Japan, China, and South Korea have already stated that they'll shoot the rocket down if it enters their airspace (note to readers:  since we live directly under South Korea's airspace, this aspect commands a certain amount of our attention, as you would imagine.)  North Korea's response to this has mostly been (fingers in ears) "Lalalalala, I can't hear you" and also "How silly you are to fear our friendly rockets of peace."  In fact, just to reassure the rest of the world of their peaceful intentions, the traditionally-super-secretive North Korean regime has even invited foreign journalists(!) to be on hand to observe just how peaceful this rocket launch will be, but that doesn't seem to have stemmed the tide of stern rhetoric being issued by Foreign Secretaries across the globe.

And so, here we are in Seoul, less than an hour's drive from the North Korean border, a mere 200 or so kilometers away from Pyeongyang, way too close for comfort to an angry rogue state with a chip on its shoulder and nuclear capability.  As I've said in previous posts, most of the time we don't think about it too much - until a situation like this arises.  Then, all of those scary thoughts that most of us keep locked up in the back of our subconscious basements start hammering at the door and poking their undead hands through the cracks like zombies in a horror film.

With all this talk of  rockets, and nuclear missiles, and potential threats and international sanctions  flying thick and fast through the airwaves, it would be easy to worry, fret, stew, and obsess about all the 'what ifs.' And maybe I will feel that way at some point.

Today, I'm hopeful.  Optimistic.  Full of faith that things will unfold in the way they should. 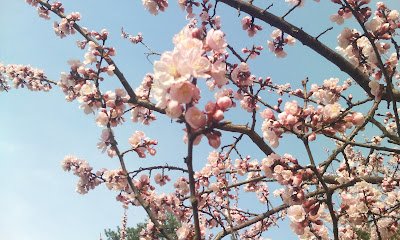 Unknown said…
I know that fear. I grew up in Atlanta, GA being told that Castro was going to nuke Atlanta off the map. We had nuclear fire drills every 3 weeks (alternating with the tornado and fire drills, of course). I spent a lot of time under my desk during my elementary days.

You have the right mind set - the blossoms ARE beautiful - and what will happen will happen.

Easy to say, tough to live.

MsCaroline said…
Joy - Thanks for the kind words. I have to say, life goes on completely normally here in Seoul, and if there is a sense of heightened tension out there, I've been blissfully ignorant, since I can't understand any of it.;)And you're right. The blossoms ARE beautiful. I've been waiting for Spring for (what feels like) years - and I'm not letting some rocket ruin it!
April 13, 2012 at 12:00 AM

Karen said…
Beautiful blossoms and apparently the rocket fell apart and into the sea. Hopefully harmlessly!
Enjoy the blossoms...and Friday!
April 13, 2012 at 2:07 AM

MsCaroline said…
Karen - aren't they gorgeous? I can't wait to get at them with something besides my phone camera! Re: rocket - well we're all just hoping they don't do something stupid just to 'save face.' Always exciting....
April 13, 2012 at 2:27 AM

Heather said…
Beautiful, the blossoms and the language about things unfolding as they should. I'm optimistic, too!
April 14, 2012 at 9:40 AM

MsCaroline said…
Heather - thanks! It's hard to worry when everything around you is blooming and beautiful. I suppose I should be thankful that this is happening now instead of in the dead of winter...
April 14, 2012 at 9:46 AM

BavarianSojourn said…
The blossoms are beautiful... Ignore the rubbish from next door if you can... I am sure it must be worrying but hopefully won't amount to anything xx
April 14, 2012 at 2:09 PM

MsCaroline said…
Emma- I hope you're right. This sort of thing has been going on since we moved here. Most of us don't really think about it anymore!
April 14, 2012 at 11:42 PM