Those of you who are in - or from - the United States will probably be aware that today (November 22nd) is Thanksgiving.  (If you are not from the US and would like a brief primer, you can refer to this post I wrote last year, outlining the basics and lamenting the fact that the Asia Vu family would not be spending the holiday with their loved ones.)

As it turns out, we won't be spending this Thanksgiving Day with our loved ones, either - not even each other, since MrL and I both have to work.  Son#1 is, of course, still at University in the US, and Son#2-whose school does close for Thanksgiving - will be spending the day at Lotte World with an assortment of his friends from a variety of countries and cultures who either a) don't celebrate Thanksgiving or b)whose families are working like we are.  (Let me add that, for a 15-year-old boy, a visit to an amusement park with your friends is always preferable to hanging out eating with old people, so he's not upset in the least.)

Never fear, though:  we'll still be celebrating - just a bit later, on Friday evening with the other expats and their families from MrL's office.

But this year, I will be working on Thanksgiving Day.  The school where I teach - while international - is not American and, therefore, quite reasonably, does not celebrate American holidays. MrL's company is on a Korean holiday schedule. So, Thursday the 22nd will see MsC and MrL heading to work just like on any other day.

I originally was not going to mention this on the blog, because I didn't want to sound self-pitying.  You know:  "Oh, poor me, my husband and I have to work on Thanksgiving and one of my children is 6,000 miles away and the other one will be spending the day without his family and not eating turkey, alas and alack." First World Problems, right?

I will admit to initially having felt a tiny bit blue about the whole thing, but then I decided that, if I couldn't share Thanksgiving with my family, I would go ahead and share it with the students that I teach every day. Accordingly, over the last few weeks, I trolled the internet for some good material, looked out a couple books with simple descriptions, and even found a couple of great little videos on YouTube that explain the American Thanksgiving in relatively simple language, including one which makes up for what it lacks in depth with a really catchy tune, entitled, "Let's Have a Dinner - Thanksgiving!"

I planned on following this with a charming tale about a turkey who (successfully) evades a rifle-toting farmer (Run, Turkey, Run!-destined to be a classic, I'm sure.)

And of course, I planned to cap it all off with a true American childhood Thanksgiving classic:  the hand turkey. 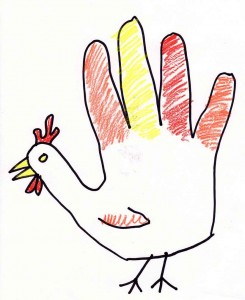 As I dug through all the material, it really was like a walk down memory lane for me:  the songs, the stories, even the crafts - from my childhood, and my own children's.

When I taught my first lesson on 'American Thanksgiving' on Monday, I think I had more fun than the kids did.  I'll teach that same lesson 4 or 5 more times before I leave work on Friday, and I'll enjoy it every single time, I'm sure.

It has been such fun to share the Mayflower and pilgrims and pumpkin pie and family dinners for the first time with these kids! I have looked forward to every class and sharing every activity with them - yes, even the hand turkey.

In a way, I've been re-living all of my Thanksgivings by sharing them with my students.

Today, even though I'll be standing in front of a classroom instead of sitting down at a table with my family, it will still be Thanksgiving.  I'll be sharing those stories, those traditions, and the custom of - for one day at least - reflecting on all we have to be grateful for.

And I will be thankful.

Karen said…
And a Happy Thanksgiving to you, too, Carolyne. Of course, it still isn't really Thanksgiving yet so you haven't missed anything. But....work is over for 4 days, as is school and the festivities are planned. Still have to make the squash tonight and then tomorrow is the big day. I love your idea of sharing Thanksgiving, it gives you a chance to experience it as you teach others about this important day in your culture.
I'm ready to enjoy my day filled with family, food and football. A bit of a celebration for Katie, as well, since she just found out that she made the All-State Junior Chorus this year. So proud of my girl!
November 21, 2012 at 10:26 PM

Stacy said…
It's been a long time since we have celebrated Thanksgiving as a family on the proper Thursday. Because of work/school constraints, we tend to cook and bake together on the weekend anyway and find that it is much more enjoyable than trying to squeeze that special day into a weekday evening.

The important thing is getting together with people who matter to you, enjoying some lovely food and being grateful for the blessings. The day itself is not important at all.

MsCaroline said…
Karen - Happy Thanksgiving - enjoy your family, food, and football - and congrats to Katie!
November 22, 2012 at 7:44 AM

MsCaroline said…
@Stacy - yes, we've never invested much in the actual day - more in the thought. And - like you, I'm sure - we both have spent many Thanksgivings far away from our families. I had an absolutely wonderful day today - couldn't have asked for a better one. Looking forward to tomorrow night's dinner as well - and Happy Thanksgiving to you and yours!
November 22, 2012 at 7:50 AM

BavarianSojourn said…
Happy Thanksgiving my dear! I think it's great your taught your class about it, it's important to learn about all of the world's cultures and celebrations after all right? Hope you have a lovely time celebrating on Friday instead! :)
November 22, 2012 at 12:20 PM

Elizabeth Musgrave said…
I adore the hand turkey! I also love your approach to the whole thing. I hope you have a happy day and many more happy days, both Thanksgiving ones and ordinary ones. Good wishes to you and your family from up a hill in North Wales!
November 22, 2012 at 5:58 PM

Anonymous said…
Happy Thanksgiving! My husband had to work today too, so I took my kids and we met an American friend and her two kids at a park for a picnic. It ended up being one of the most relaxing Thanksgivings that I have had in a long time!

On another note, while I was living in Seoul, I brought some leftover turkey sandwiches for a group of doctors that I tutored. They were REALLY reluctant to eat them. I think they each only took one bite just to be polite. I thought that this was pretty funny since they had just asked me the week before to go to a restaurant that served dog. I guess to each his own!

MsCaroline said…
Emma - Thank you! And,yes, and it was fun to tell the story to people who didn't already know it - fresh eyes, so to speak.

Elizabeth - Yes, they are darling, aren't they? And such an absolutely typically American Thanksgiving craft for children. I had so much fun doing it with them. And thank you very much!

Outbound - you know, I have heard from so many people this year (expats and folks back home) who have just chucked the whole turkey dinner and instead simply enjoyed the day doing something that made them happy - seems like a perfect way to spend Thanksgiving to me! Love your story about the reluctant Koreans - turkey seems a lot more benign than dog, doesn't it? Based on my experiences last year, our Thanksgiving dinner will include all of the traditional foods (since it's a meal for expats, after all) but then will also include a number of typically Korean items. Honestly, I have to say that kimchi tastes quite good with turkey! Happy Thanksgiving to you and yours!
November 22, 2012 at 11:57 PM

Trish said…
A lovely post, Carolyne, and I may just have to have a go at drawing a hand turkey!
I think you might like an American blogger called The Whining Diner and WellFedFred - she has just written a very funny post about Thanksgiving traditions. I think it would appeal to you.
November 23, 2012 at 8:13 AM

MsCaroline said…
Trish - thank you! I really did want to make sure that people got that I wasn't complaining or feeling sorry for myself - just enjoying sharing the whole thing with a fresh new audience.
The hand turkey is a definite classic and not very demanding - just about my level of in-class crafting, not being a primary school teacher (by training or inclination.)
I did go over to 'Whining diner' and loved her Thanksgiving post - have added her to my reader. Thanks for the suggestion!
November 25, 2012 at 12:19 AM