Expat Life: It's Just My Size! 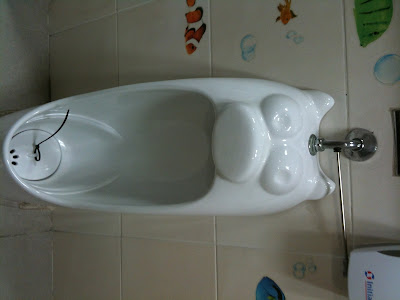 Although MsCaroline is no longer parenting very small boys who need constant supervision, those days are not so far behind her that she can't appreciate the charm of this thoughtfully-placed fixture that she ran across in the Ladies' Room in the Dongdaemun subway station last week.

(As an aside, MsCaroline has found that Korean culture - and Koreans in general - really love little children, and the infrastructure really does seem wonderfully well set up to support parents and their children, so this sort of charming detail geared towards small people is not unusual. If you are moving to Seoul with small children, you will be pleasantly surprised.)

This clever child-sized urinal would have been a welcome sight to MsCaroline back in the days when she was  trying to wrestle with two of them in a toilet stall approximately the size of a phone booth, doing her best to keep one from wandering off or - even worse - touching things, while trying to encourage the other one to pay attention for God's sake, not on the wall, that's your shoe! and stop laughing at your brother.

Of course, MsCaroline suspects that - given her luck - at least one of her children would have been convinced that the friendly porcelain pig (cow?) was going to eat him(or parts of him,) precipitating some sort of meltdown, and refused to get anywhere near its gaping maw. Which would have resulted in the three of them jostling in the stall anyway.

But she still thinks it's a nice idea.
Email Post

Trish said…
It makes you wonder why we don't just encourage boys to sit down to pee. It would save so much grief and splashes.
November 13, 2012 at 8:05 AM

BavarianSojourn said…
Because Trish, in my experience they still pee all over the floor! :D I really wish we had one of those in our house!
November 13, 2012 at 9:04 PM