Expat Life: You Oughta Know By Now: Eating Out in Seoul


As most of you know, MsCaroline is not exactly an authority on expat life in Seoul, although she does endeavor to share her own hard-won knowledge with anyone who is interested.

MsCaroline will, however, say, that, after 18 months here, she knows the basics.  She knows greetings and farewells, she knows when to bow (when in doubt - bow), she knows when it's OK to push (sidewalks and subways) and when you have to take a number and wait quietly (banks, clinics, offices, the mobile phone service center.)  She knows about driving in Korea ( traffic laws=there for other people to follow) and she knows about restaurants (buzz for the waiter, metal chopsticks, pour water for others first.)

Since MsCaroline knows all this - and more - you would think that her days of being surprised would be over by now, but you would, sadly, be wrong.

So, when she went to a Mexican restaurant in Seoul a few weeks ago, she was genuinely surprised when she ordered a margarita and it turned out to be made of soju.

There is clearly no excuse for this.  It has been 18 months since MsCaroline got here, and she knows that cuisine in her host country is different from what you get at home.

She has, over the course of her stay here, been offered cow intestines, roasted silkworm larvae, raw cuttlefish, stingray, pickled radish, and dried seaweed.  She has tried all of them and found that some of them are delicious, and she has learned the importance of approaching every new food with an open mind.

However, the main lesson she has learned about food here in Korea is this:  even if it has the same name as it does in the US, it does not go without saying that it will taste the same - or even have the same ingredients.  This does not mean it will taste bad, though.  It simply means that you should not expect to get exactly what you would get back in the US.

MsCaroline knows this.  In fact, MsCaroline knew this before she arrived, although she has had to be reminded of this repeatedly over the course of the last year due to being slow and often very thick.

So there was no excuse for any surprise whatsoever when she ordered 'seafood curry' last week at a Thai restaurant here in Seoul and found this perched jauntily on the top of her order: 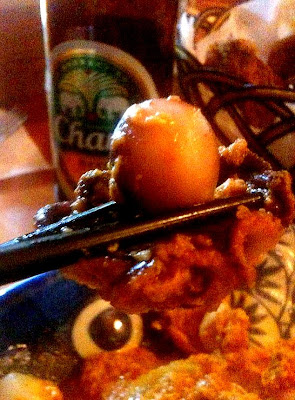 Of course, MsCaroline had forgotten that, when you say 'seafood' in Korea, it's entirely reasonable to expect octopus or squid or shrimp to show up in your entree.  Intact.

And, even though they were in a Thai restaurant, they were still in Korea.

So MsCaroline had no excuse for not knowing, and she had even less excuse for being surprised.

But MsCaroline -while she is slow - has learned some things, and I am pleased to say that she was able to rise to the occasion.

She did not say, "Eeeewwww! there's an octopus in my curry!"

She did not say, "Oh, how weird, there's an octopus in my curry!"

She simply did what you do in Korea when there's an octopus in your curry.

Reader, she ate it.

And that, my friends, is what we call progress.

Trish said…
I think I'd have been happier if it had been chopped up and therefore disguised. A bit like calamari.
November 7, 2012 at 8:12 AM

Dirks said…
The folks at work recommend this video as a source of restaurant recommendations in Seoul. I hope you can find a few good ones you haven't been to yet! http://www.kimchichronicles.tv/episodes/the-seoul-food-chronicles/

[You might also be glad to know that they sell Soju in my local Whole Foods. Haven't tried it yet, but at least you can be assured of a source when you return.]
November 7, 2012 at 4:20 PM

Miss Footloose | Life in the Expat Lane said…
Loved your story, and so entertainingly told! Yes, if we have an open mind, we do get adventurous in our eating habits in foreign countries. Keep eating.
November 8, 2012 at 12:00 AM

MsCaroline said…
@Trish - to tell the truth, I think I would have been, too!

@Dirks: Thanks for the recommendation - I've knew it was a cooking show, but didn't realize they even mentioned restaurants - will definitely check them out!

@Miss Footloose - Thanks so much - yes, we have to keep an open mind - but I've found it's easier to have one when you're contemplating a pickled radish than when there's an octopus on your plate....

@Naomi: You're right! That's the spirit! (Although I must confess - he seemed to take an extraordinarily looong time to chew and swallow. Maybe he was a 'starter size' octopus for foreigners...)Thanks for stopping by!

MsCaroline said…
@BB - oh, yes - the eyeball...yes, that was quite a tense moment when I first saw it. Took me a minute to realize that it was just the dish - the seafood curry was served in a dish shaped like a fish and also painted to look like one. I would have to say - open mind or not - I would have had to draw the line at eating an eyeball.
November 8, 2012 at 8:47 PM

BavarianSojourn said…
And I too was very worried about his big old eyeball staring up at you! Loved this post, very very funny. Although I of course was laughing with you, not at you! :)
November 8, 2012 at 9:18 PM

Michelloui | The American Resident said…
LOL!!! Funny. Yes, I try to tell my visitors all the time that just because it Looks the Same (branding) does not guarantee it will be the same. Just this weekend we were lamenting Tex Mex in the UK...